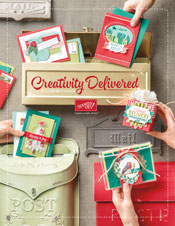 This morning I posted video number 300!

In it, I share the new products from the forthcoming Christmas Catalogue which I received when I was on the recent Stampin’ Up! 2017 Incentive Trip in Thailand.

The photograph I’ve used as a thumbnail for my video shows the first Christmas card I’ve made this year!

I’ve used the Carols of Christmas Bundle from the new catalogue which Stampin’ Up! have pre-released so customers can buy it during August!

On my blog yesterday, I shared a photograph of the stamp set, the dies and the die cuts I’d made.

The dies are called Card Front Builder Thinlits, because there are four dies that help create stunning card fronts. 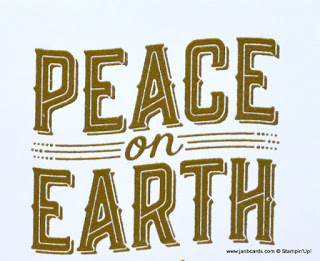 They can also be used to decorate layers on the inside of cards, gift tags, boxes, etc!

For today’s card I used the straight, three-sided die, and cut the top half of the card, and then the bottom half.

I
chose to use the Peace on Earth Sentiment, and wiped the top of the
cardstock using my Dust Buddy to remove any static or greasy
fingermarks.

I
stamped the sentiment in Versamark, sprinkled it with Gold Embossing
Powder and then heat set it using my Heat Tool. 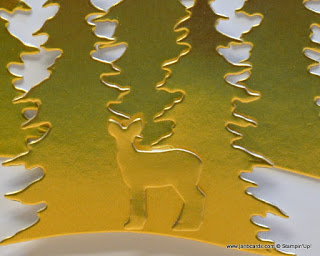 As I wasn’t sure how
many trees I wanted, I die cut two doubles, and two single trees using our
Gold Foil.

I also die cut two deer at the same time.

After
playing with different arrangements for the trees, I decided on what I thought looked best. 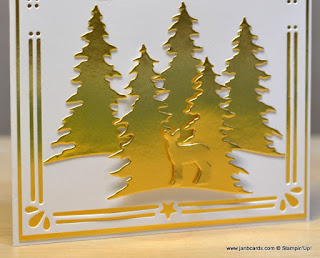 The first three were adhered to the card with
Tombow, and the top double set of trees was adhered with Dimensionals.

It took me a long time to decide what to do with the deer!

I wanted it
in gold to stay with the gold and white colour scheme, but I wasn’t sure
if it was noticeable enough!

For a while I considered die cutting the deer in white, or even black, but gold won!

Finally, to decorate the inside of the card, I added a layer of Gold Foil, and then a top layer of Whisper White. 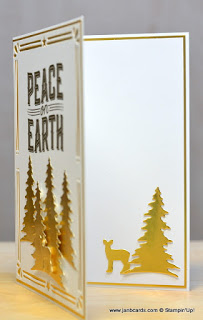 I thought about using the same outside design as I had on the top layer.

I decided to use the remaining single tree and deer, and adhered them using Tombow.

At the bottom of today’s blog, I’m sharing a Stampin’ Up video which features the Carols of Christmas Bundle that’s on pre-release.

Tomorrow and Friday, we’re having the house re-carpeted after hubby’s recent accident on the landing carpet and in our bedroom!

Neither of us are looking forward to this, especially clearing out my studio, but it will be lovely once it’s all over and done with! 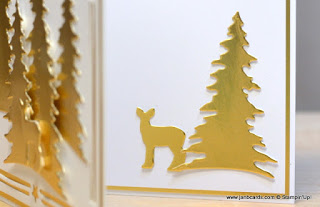