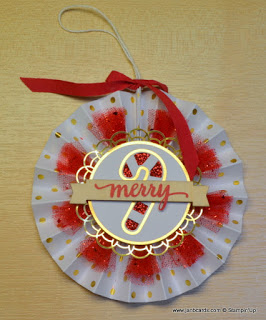 Have
you seen the Be Merry Kit on page 32 of the new Christmas Catalogue?

I have to say it’s even
better in real life and the assembled rosettes are stunning!

In
today’s video I share some tips and tricks I learned while I was
learning how to do them!

One of the suggestions Stampin’ Up! have for
this product is to use them as gift tags, but for me, they are just too
beautiful to give away!

I’ll be using mine either as ornaments for my
Christmas tree, or as a banner to hang on the wall above the fireplace,
along with a string of small white lights wrapped around the cord across the top!

Another possible use for them
is as decorations on a gift box!

I’m sure other crafters will come up
with their own ideas, too! 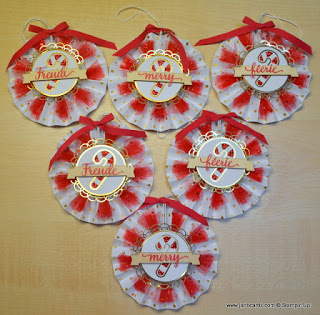 It
was really easy to put these rosettes together, and needless to say, I
added my little spin to them, too!

The extra tools you need for
this project are scissors, the Fine-Tip Glue Pen, Dimensionals and a hot
glue gun.

I also found it useful to have my Silcone Craft Mat, Tombow Liquid
Glue, my Paper Piercer and of course, my tweezers!

I used some of the
gold stars from the Metallic Enamel Shapes to put on the top of the
Christmas tree. 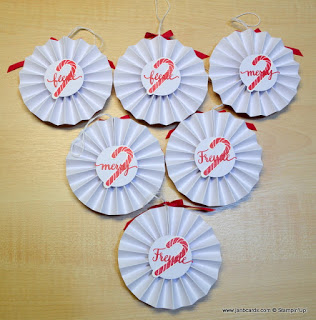 I also sorted out a retired stamp set and co-ordinating
dies so I could add a candy cane on the back of the red rosettes.

On
the back of the green ones, I adhered the Christmas tree which was
removed from the disc that went on the front of the rosettes.

As I
might be using these rosettes on my Christmas tree, I wanted to have
some decoration on the backs.

Not only did I add the tree and the candy
cane on the back, I also added the sentiments in all three languages.

The kit includes six Merry die cuts in red in English, German and French, and the same in green.

I
successfully planned it so I have two English, two German, and two
French sentiments on the front and back of the six red rosettes, and the
same on the green ones! 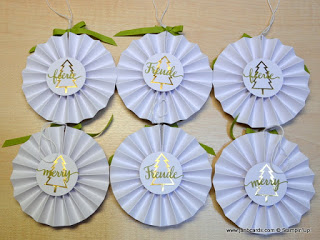 Apart from adding the star to the Christmas tree, and decorating the back of the ornaments, there was one other change I made from what’s shown in the catalogue.

I did mine all red and all green. 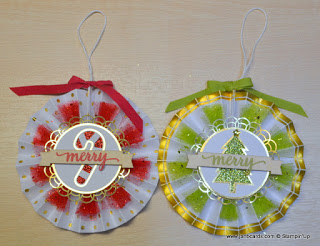 I hope you give these rosettes a try – I’m sure you won’t be disappointed with them! 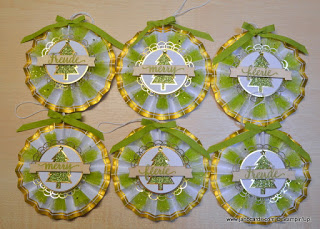 I have hubby working from home today, which is a real blessing because I’ve done something that has made my emails disappear! DOH!

Why is it so easy to do these things on one’s own, but nigh on impossible to remedy them on one’s own!

That’s about it for today. Until tomorrow, happy crafting,