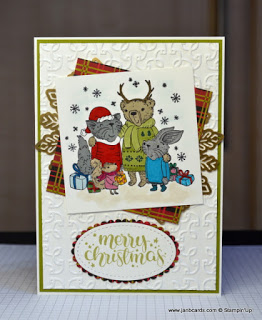 When I saw my GP yesterday she told me the Xray had been of my spine, not my ribs, and that the
report was inconclusive!

As there is no treatment for cracked ribs I
suppose it doesn’t matter, but the good news is that my GP is arranging a
Dexa Scan for me! 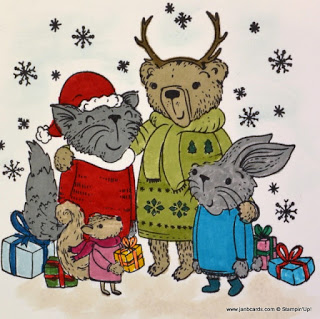 I used watercolouring for the background of the image painted with Marker Pens.

I was pleased with the results of both methods, except for the
watercolouring of the cat’s hat and sweater – I used Real Red, but it
looks pink!

I
used far too many different colours for each image to list them all
here.

I was determined not to restrict myself to just three or four
colours, which is my preference! 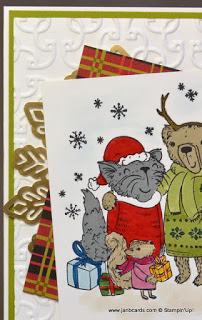 I enjoyed colouring both
images, and apart from the Real Red I’ve already mentioned, I don’t
prefer one or the other; I like them both!

This layer had
already been dry-embossed using the Garden Trellis Embossing Folder in
preparation for a previous project, but I’d decided not to use it on that occasion!

I cut
one of the new Gold Foil Snowflakes in half, and adhered each piece behind a
square of the Christmas Around The World Designer Series Paper (DSP).

Then I
adhered the image at an angle, and then to the card
front, again at an angle.

I stamped the sentiment onto a piece of Whisper
White CS, using Pear Pizzazz Ink. 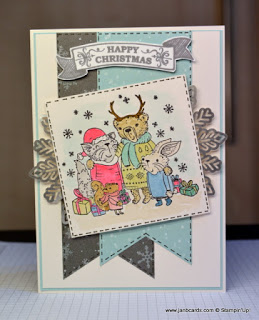 I die cut it using an oval die from
the Stitched Shapes Framelits Dies, and adhered it to scalloped oval
from the same DSP.

It had been die cut using a die from the Layering Ovals Framelits Dies.

Inside the card I
adhered a layer of Pear Pizzazz CS with a layer of Whisper White CS.

It hasn’t been decorated yet, but I’m planning to
stamp the candy cane from this stamp set on the top layer and colour it
in using Real Read and Pear Pizzazz Marker Pens. 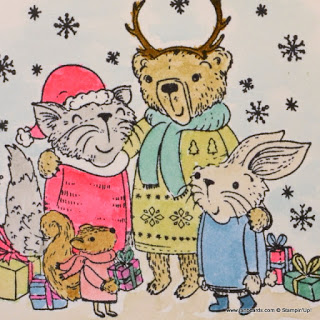 I chose
two designs from the Christmas Around the World DSP, and fish tailed
them using the Triple Banner Punch.

Using a ruler and the 0.5
Journalling Pen, I drew faux stititches around both banners and the
image.

I used  a Silver Foil Snowflake cut in half to adhere behind the
image, and laid it on the card front along with the two banners so I could decide on the layout.

As I
didn’t have much room for a sentiment, I chose the banner stamp from the
Seasonal Bells Stamp Set.

I tend to use Ativan Online as it works quite well to handle anxiety and rather quickly, the only thing is it usually makes me a bit sleepy.

Looking at it now, I see I stamped it on a
piece of Whisper White CS – I should have used Shimmery White CS!

I used
Basic Grey Archival Ink, and cut he sentiment out freehand. 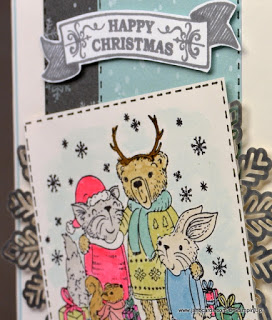 Hopefully I
can correct this with a new image on the correct CS, and adhere it on top to cover it up.

I’ve adhered a layer of Pool Party CS and Shimmery White CS inside
the card, but haven’t decorated it yet. My plan is the same as my Marker Pen card but I’ll colour the image using watercolours.

Although I don’t normally like rainbow coloured cards, I’m quite pleased with how these cards have come out!