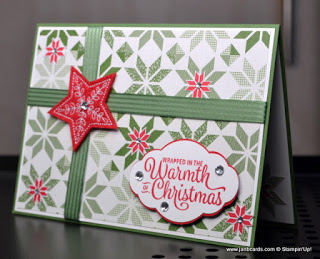 I
would like to say a big Thank You to Canadian SU Demonstrator Sandi
MacIver for the inspiration for today’s card. 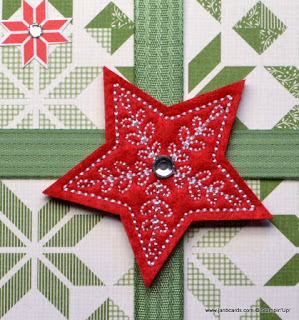 I was flicking through
Pinterest yesterday, and saw a card Sandi had posted October last year
where she had used the Star of Light Stamp set and co-ordinating
Starlight Thinlits Dies.

The card was in Whisper White and Gold Foil,
and had ribbons crossed as if wrapping a present.

For the layer
underneath, Sandi had used four pieces of Whisper White Cardstock (CS)
that she had dry embossed using two different patterned embossing
folders.

She had arranged each design in diagonally opposite
corners to each other. 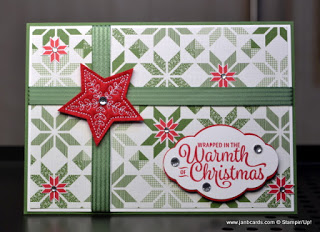 On the top of where the ribbons crossed over, Sandi adhered a large star she’d die cut in Gold Foil.

The card was really beautiful! 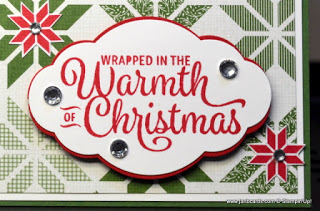 I
chose to use a design from the Quilted Christmas 6″ x 6″ Designer
Series Paper (DSP), layered on a piece of Whisper White CS, as my top
layer.

Then I chose some Garden Green 3/8″ Stitched Satin Ribbon to wrap
around the top two layers.

For the centre where the ribbons cross over, I chose a Real Red Stitched Felt Star, and I added a Rhinestone in the
centre to finish it off! 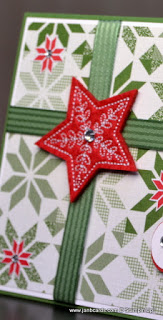 I adhered the felt star onto my card using Glue Dots

I
thought the “wrapped” sentiment, which is from the Snowflake Sentiments
Stamp Set, fitted in nicely with the wrapped card!

I stamped it on a
piece of Whisper White CS using Real Red Ink, and punched it out using
the Pretty Label Punch.

I also punched another Pretty Label using a
scrap of Real Red CS, which I cut in half horizontally.

Then I adhered both pieces to the back of the sentiment, allowing a little bit appearing above and
below the sentiment.

I added three Rhinestones randomly around the
sentiment, and then added it to the card front using Dimensionals. 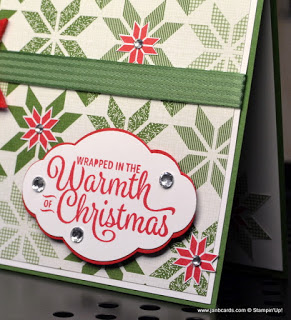 I felt
my card needed a bit more red in the overall desgn, and decided to fussy cut six of the
little quilted stars from a red design from the same DSP pack.

If you
don’t like fussy cutting, you could die cut some of the little stars
that come in the co-ordinating Quilt Builder Framelits Dies.

I adhered
my fussy cut stars to the top layer using Tombow, and then added a Rhinstone in the
centre.

I adhered this to the Garden Green CS card base, and then
adhered a layer of Whisper White CS inside the card. 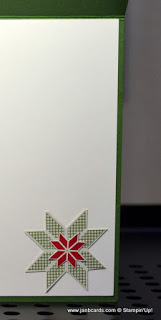 To decorate this, I
fussy cut a larger Garden Green Quilted Star, adhered it to the layer
and then adhered the red fussy cut star on top. 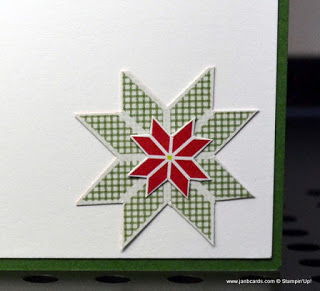 Looking at it now, I think I’m going to add a small circle of Silver Glimmer Paper to the centre of the small star in place of a Rhinstone!

I’m really pleased with this card and hope you like it, too! Many thanks for the inspiration, Sandi!