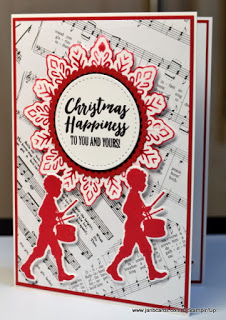 Yesterday I decided to
use one of the Foil Snowflakes and see what kind of a snowflake I’d get
if I used one as a stencil.

I used Real Red Ink on Whisper White
Cardstock (CS) with one of our sponges I’d cut into four.

I allowed my
sponging to go over the edge but tried to keep it in as much
of a circle as possible.

When I removed the Foil Snowflake, I was pleased with the
effect but the outside circle was much darker than the middle, which I
didn’t like. 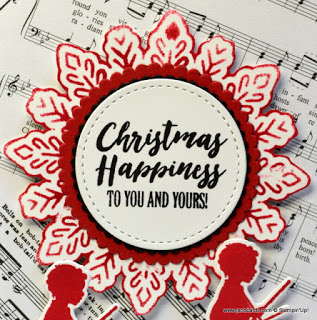 I decided to fussy cut the snowflake instead.

I chose one of my
favourite colour schemes for this card – black, red and white.

I
started with a Whisper White CS card base, a layer of Real Red CS, and a
top layer of Designer Series Paper (DSP).

I chose one of the Basic Black on Whisper White music sheets from
the Merry Music Specialty DSP. 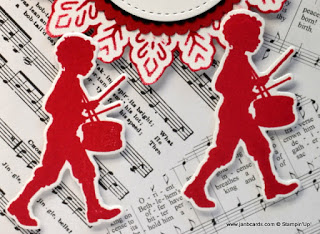 I adhered the
layers together, and onto the card base using Tombow.

Using
Basic Black Archival Ink and Whisper White CS, I stamped the sentiment
which is from the Christmas Happiness Stamp Set.

After die cutting it
using the Stitched Shapes Framelits circle die no. 3, I layered it on a
Basic Black CS scalloped circle, and then onto a larger Real Red CS
Circle. 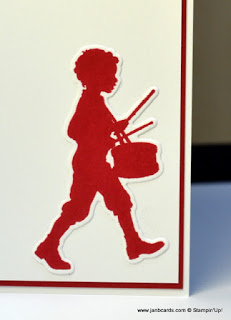 Both the circle dies were from the Layering Circle Framelits Dies.

As
I’ve used a music design DSP, I decided to stamp three of the drummer
boys from the Musical Season Stamp Set.

I had considered using Craft White Ink on Basic Black
CS, but decided against it! 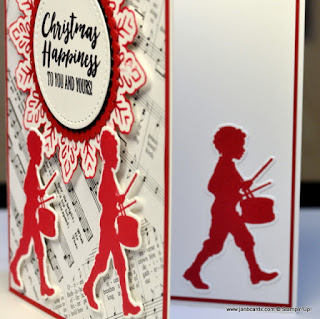 As the pattern on the DSP was at varying
angles, I adhered two of the drummer boys at different angles as much
as possible.

It’s so much easier not having to worry about getting things
in straight lines!

I
was happy with the finished card, but I would have liked to cover the
solid red uppermost point of the snowflake. 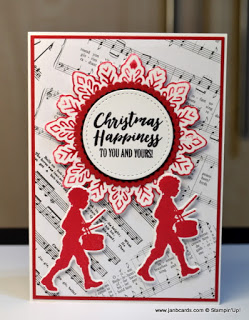 This happened because the
little piece that should have been there wasn’t!

I experimented with
ribbons and bows, but nothing looked right!

Inside
the card, I adhered a layer of Real Red CS, with a layer of Whisper
White CS.

I finished the card off by adhering the third drummer boy in
the bottom right hand corner.

I
have my two cards and 3D project ready for classes this weekend, and
no, this isn’t one of them! 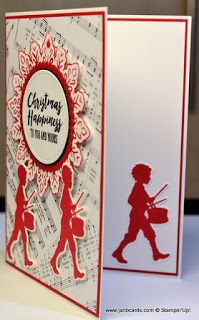 Today I’ll be making my video for Sunday!