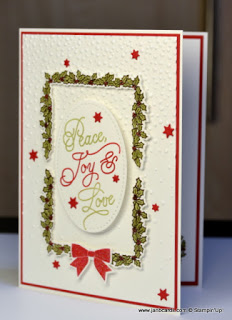 At the beginning of
the week, I told you I planned to make some October customer thank you
gifts – the boxes with the chocolate and stylus pen – every day, but
I’ve had to increase my daily amount as I have so many orders coming in! No, I’m not complaining, I’m thrilled!

Here in the UK, Stampin’ Up!
have put out an apology that delays may occur with deliveries as the
warehouse have been swamped with orders since they announced this
month’s special offers! 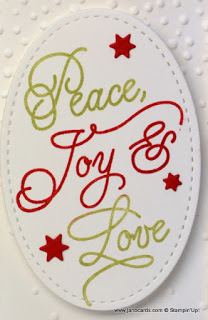 I have three orders in the pipeline and the only
delay for me is one, possibly two days. Given that I normally receive
my orders in four or five days, that’s still jolly good! Stampin’ Up!
never fail to amaze me! 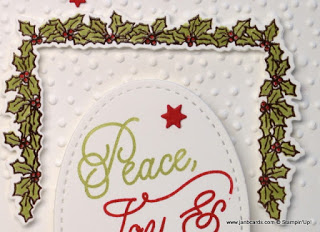 The
idea for today’s card was to stamp two “U”s of holly facing each other,
directly onto the top layer of the Whisper White Cardstock (CS), with a raised sentiment in the centre.

I’d
measured it out where I needed to stamp, and wiped the card with my Embossing Buddy. I inked the stamp in Versamark first, then Early Espresso Ink, and stamped. I dipped the layer in my box of Clear Embossing Powder, shook off the excess, and then heat set it  using my Heat Tool.

I chose to use Early Espresso rather than the more obvious Basic
Black Archival Ink, because I think the Early Espresso Ink stays
wetter longer, and therefore takes a better covering of the Clear
Embossing Powder. 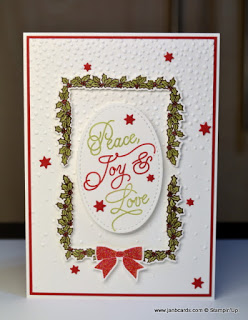 I
used the Pear Pizzazz and Real Red Marker Pens to colour in the leaves
and the berries. It wasn’t until I started colouring that I really
appreciated how small each leaf is, and how tiny the berries are! LOL!
Patience persevered and I completed the task.

The sentiment I’ve used is
from Peace This Christmas, and I painted it using the same two Marker
Pens. Using the Stitched Shapes Framelits Dies, I die cut the sentiment,
so I could pop it up on Dimensionals inside the holly frame, but I
wasn’t happy; it didn’t look right! 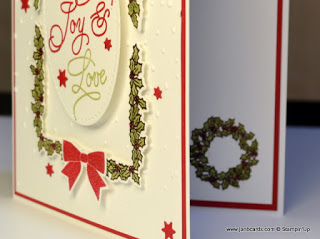 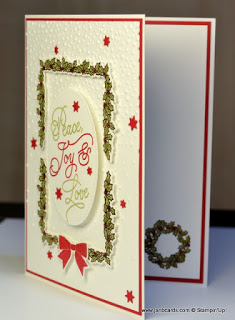 I
decided to die cut the holly using the At Home Framelits Dies, and then I started working
on the top Whisper White CS layer. I dry embossed a layer using the
Holly Embossing Folder, but I didn’t like it; so I did a layer with the
Petal Burst Embossing Folder! I still wasn’t happy, so I tried Softly
Falling! Ta-da! Success!

I started assembling my card using a Whisper
White CS base, a layer of Real Red CS and then the Softly Falling layer –
all adhered with Tombow.

I cut the edging of a sheet of Dimensionals
into short narrow strips so I could put a line all round both of the
holly die cuts. I put double height Dimensionals on the sentiment so it
stood higher than the holly. You could use single height of our Foam
Strips as that is double the height of our Dimensionals.

I found the red
bow already stamped and die cut/punched in my Real Red CS wallet. I die
cut some Real Red CS stars using the die in the Detailed Santa
Thinlits, and started off with just three on the sentiment, but then
decided to add some more around the border. 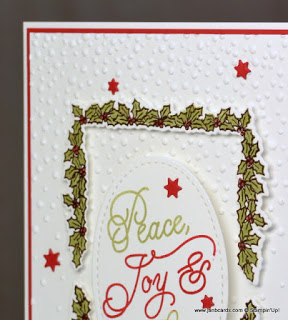 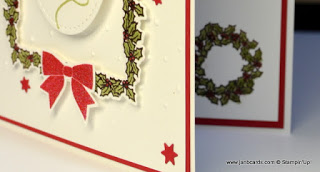 For
the inside of the card, I took a layer of Whisper White CS, wiped it
over with my Embossing Buddy, and heat embossed the holly wreath, which
was also from the At Home With You Stamp Set. I mustered the extra
patience I needed to paint the equally small leaves and tiny berries as
before!

I adhered this layer to a layer of Real Red CS and then to the
inside of the card! I feel much happier with today’s card than I did
with yesterday’s, although if I was to change one thing about today’s
card, it would be to use a darker green to paint the sentiment stamp
with. Although I used Pear Pizzazz, the same as the holly leaves, it
looks a lot lighter. Having said that, I’m still happy with today’s
card!

I
have to go out for a while today, but I should be able to go into my
studio mid- to late adternoon. Until tomorrow, happy crafting.