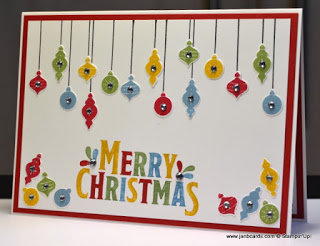 I can’t get much
further away from my normal style than today’s card!

It was inspired by
something I saw on Facebook recently but I think it was patterned paper; the card I saw was really striking!

My
plan was to do the baubles and then have the Deck The Halls stamp
underneath!

Unfortunately, I should have made the card portrait mode to
allow enough room for both! 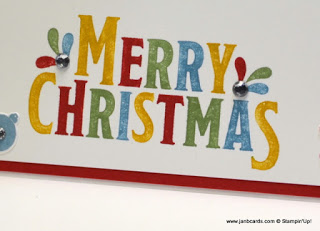 To
make this card, I started by choosing the four colours I wanted to use:
Real Red, Wild Wasabi, Marina Mist, and Crushed Curry.

I stamped both
the bauble stamps onto scraps of Whisper White Cardstock (CS) in each of
the four colours.

Then I used the two co-ordinating dies in the Card
Front Builder Thinlits Dies. 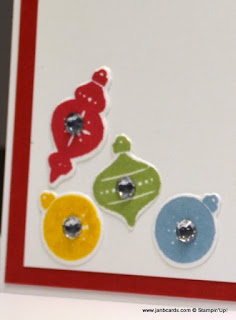 After
cleaning the stamps, I re-inked using Basic Black Archival Ink, and set
up my Stamp-a-ma-jig for each stamp.

I continued across to the left hand side, and found five images fitted
in brilliantly.

Using a little dab of Tombow, I adhered the baubles in
the same positions as on the stamps, keeping the colours in the same
order. 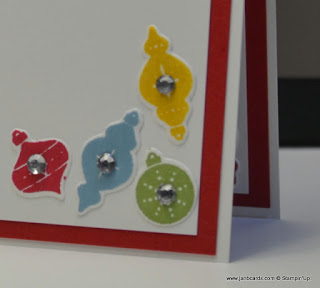 It was at this stage I realised I wasn’t going to get Deck the
Halls in, unless I stamped it onto a spare piece of Whisper White CS,
and adhered it so it was covering up some of the baubles.

I think this idea
would have worked, but I didn’t want to cover up any of the baubles! 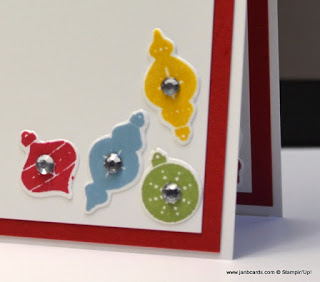 I
moved onto the Merry Mistletoe Stamp Set and used the main sentiment.

Although I rarely create multi-coloured cards, this was the exception
and I wanted to carry the colouring theme through my card.

This has been
one of the most relaxing cards I’ve made for a very long time – I’ve
really enjoyed creating it! 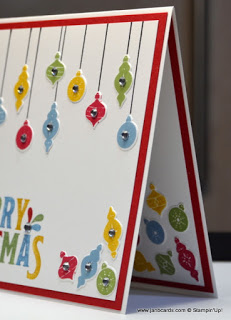 I
started my card with a base of Whisper White Cardstock (CS), and added a
layer of Real Red CS.

I decided to make the top Whisper White CS layer a
lot smaller than usual, and as I had several baubles left over, I
adhered them in two small piles, one either side of the sentiment!

I
decided to use a fair bit of bling by adding one of the old small Basic
Rhinestones to each bauble, and two slightly larger ones to the
sentiment.

To
finish my card, I added Real Red and Whisper White CS layers to the
inside, and adhered a “pile” of baubles on the “floor”!

When hubby saw
the inside of the card he said the baubles looked like
sweets……………..which is exactly what I thought, but I was hoping
he wouldn’t think the same! LOL! 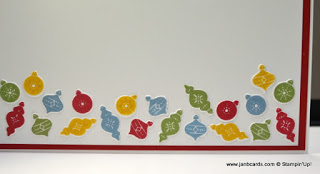 I’m not sure I could have prevented
this, although I do wonder if I’d only used three colours, whether that
would have a marked diffeeence or not?? 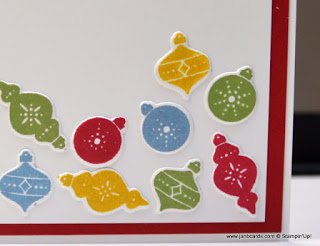 Although
it’s very much out of my comfort zone – because it’s multi-coloured – I
think this card will be well received by a family with young children!

That’s it from me today. Untill tomorrow, happy crafting.