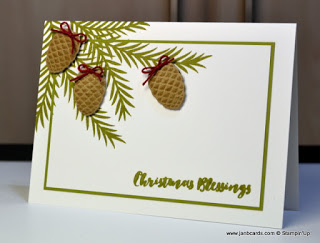 Yesterday afternoon I
was making more Thank You Gift boxes for my October online customers;
I’m pleased to say that I’m staying on top of how many I’ll be needing
by the time October comes to a close, so I won’t have a made last minute
panic! ☺ 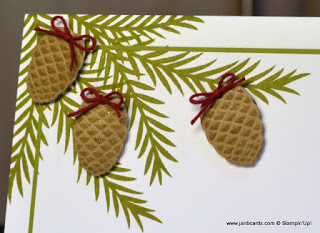 As
I’ve made so many of these boxes now, I’m on auto pilot when I’m making them,
so I have my iPad on with YouTube playing.

A video came on showing a
project using the Christmas Pines Stamp Set, which has been brought
forward from last year.

In
case you’re not a YouTube viewer, I have mine set on Autoplay, so
YouTube selects which video will play next, and the videos are all similar.

This
meant that when the first Christmas Pines video had finished, it was
followed by several more using the same stamp set. 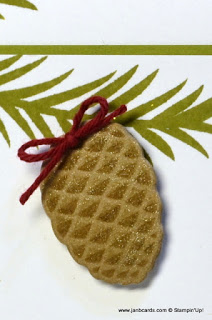 Most of the cards
were clean and simple, some used die cuts, some were stamped and some
were heat embossed, but they all had one thing in common, and that is
they all looked fabulous.

Hence today’s card has been made using the
Christmas Pines Stamp Set and the co-ordinating dies Pretty Pines
Thinlits.

I
started with a card base of Whisper White Cardstock (CS), a much
smaller sized layer than normal in Old Olive CS and a top layer of
Whisper White CS. 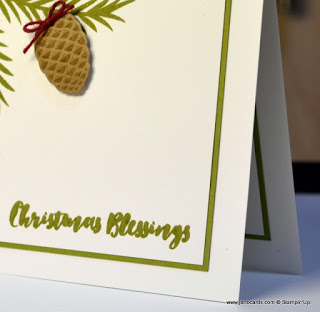 I adhered the top layer to the card base using
removable tape, and stamped two of the solid pine branches from the
Christmas Pines Stamp Set in the top left hand corner using Old Olive
Ink.

I also stamped the sentiment using old Olive Ink and a sentiment
from the same stamp set, in the bottom right hand corner of the top
layer of Whisper White CS.

I
played around with Crumb Cake and Soft Suede CS’s and Inks to create
four pine cones that I could die cut. 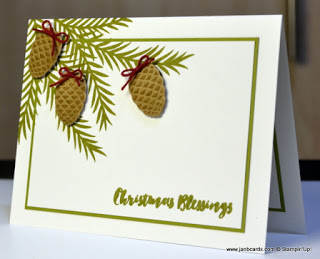 Although I used the smaller pine
cones in the set, I could have used the larger ones without spoiling the
finished look – in fact, it may have been better with larger cones! I
settled on using Soft Suede Ink, gently stamped off once, the small pine
cone with the triangle pattern and Crumb Cake CS.

I stamped six pine
cones like this – to allow for mistakes! – then I used Crumb Cake Ink and the other patterned pine
cone, to stamp on top of the six.

I finished stamping all six with the
solid pine cone stamp in Crumb Cake Ink, and then die cut them. 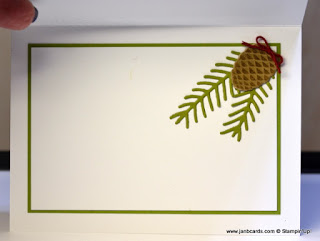 I
assembled the front of my card, and played with the arrangement I
wanted for the three pine cones. Normally, I’d just put three in a group
in the corner, but I was feeling more adventurous yesterday and adhered them using
Dimensionals in the pattern you see on the finished card. 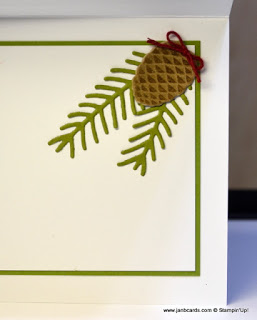 They
needed something to finish them off, and I tried several different bows from all the
sets of dies I have, as well as the bows in the Cookie Cutter Builder
Punch and the Holly Berry builder punch.

I didn’t find anything small
enough so moved onto 1/8″ ribbon which was still too wide!

I think this
Baker’s Twine is Cherry Cobbler and gave my card the finished look I was after!

To
decorate the inside of the card, I added Olive Green and Whisper
White CS layers the same size as on the front of the crd 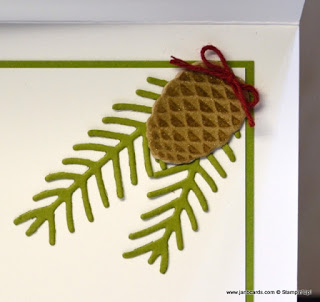 I never add anything 3D inside my cards but I did on this one as I couldn’t think of anything else to use!

Once I’d finished my card and was happy with it, I couldn’t resist going back and painting the cones with my Clear Wink of Stella Glitter Pen!

A very plain and simple card, but easy enough to make several of them withouth taking forever and a day!