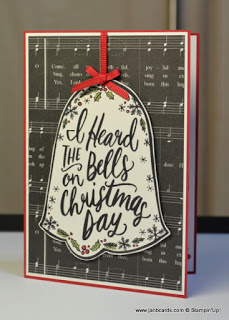 I arrived back home
later than I expected yesterday, which left me a bit short on time to
get a card done for today!

I decided to use the large bell sentiment in the
Darling Christmas Stamp Set because it wouldn’t take long….I thought!

Unfortunately
for me, I just can’t make quick cards!

Although it doesn’t show up very well in
the photographs, I gave my Clear Wink of Stella Glitter Pen a really
good work out! 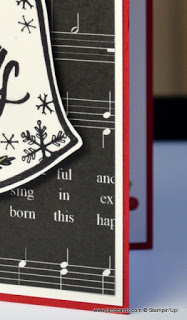 I
started by stamping the bell image onto a piece of Whisper White
Cardstock (CS) using Basic Black Archival Ink.

I used my Pear Pizzazz
Marker Pen to colour the holly, the leaves, and to draw over the lines
of the fir, making sure I went over the edges so the green could be seen.

Next I
used my Real Red Marker Pen to colour the berries. 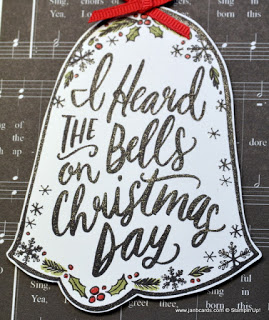 I felt it all looked
rather flat, and to give it a lift, I went over all the snowflakes with
my Wink of Stella.

I liked the effect, and decided to carefully paint over the sentiment
which was quite easy as it’s fairly large, and also very thick in
places.

Although I took care while I was doing this, I didn’t worry too
much if I went over the edge.

I was really pleased with the effect, and
decided to go over the writing and the snowflakes again, which made it
all look more glittery. 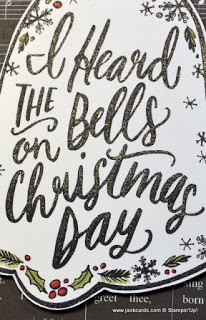 Next I went over all the Pear Pizzazz colouring
with my Wink of Stella, and then the berries.

I was extremely cautious
with the berries as Wink of Stella can make colours bleed, and I find
the colour this is most likely to happen to is Real Red!

Finally I went
round the outside of the bell twice, so everything sparkled!

I
cut the bell out and left a narrow edge of white round the outside, and
was then ready to start assembling my card. 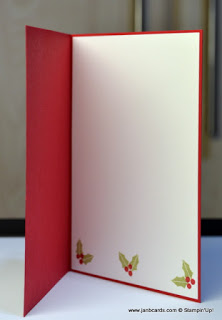 I cut some Merry Music
Specialty Designer Series Paper (DSP) for the top layer, and adhered it
to a layer of Whisper White CS.

I adhered some thin red ribbon over the
top of the layer, and on the front where it’d be disappearing behind the
bell.

I used Fast Fuse to anchor both ends of the ribbon, and
Dimensionals to adhere the bell. I tied a small bow, and adhered it in
place with a Glue Dot.

I
wanted a bell to decorate the inside of my card but the only one I could
find was in Seasonal Bells. 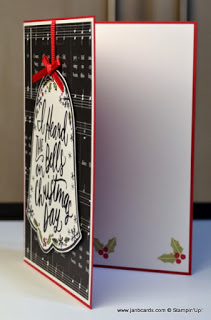 It was too big for my liking, so I went
for some holly and berries from the Hang Your Stocking Stamp Set.

I used
Pear Pizzazz and Real Red Ink on a layer of Whisper White CS, which I
adhered inside the card using Tombow.