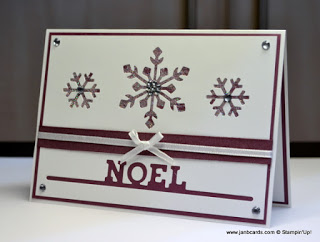 I’m pleased to say UPS
arrived with my parcel yesterday, not that it contained anything new
for me, but was topping up products I’ve been using a lot of recently! 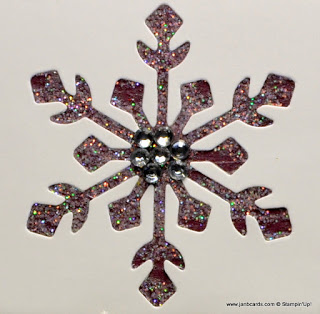 Last
night, when I showed hubby today’s card, he said he thought it was the
plainist card he’s seen me make…. which did rather surprise
me!

Not that I wouldn’t make a plain card, more that this was a plain
card! LOL!

My
original idea was to die cut some snowflakes from the top layer of
cardstock (CS), so that the colour from the second layer would show through, and then to add Dazzling Diamonds. 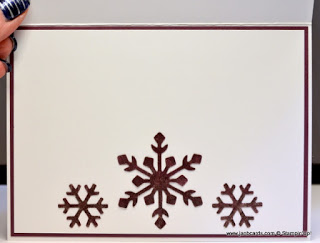 I
also decided to use our Multipurpose Adhesive Sheets (MAS), but I’m
still a bit of a newbie with these and don’t think I used them
correctly! LOL!

I adhered a sheet of MAS at the back of the white layer after
I’d die cut the snowflakes, but when I pulled the MAS backing sheet off, it
also removed the adhesive in the cut outs on the top layer! DOH!

I’m
sure someone who is far more familiar with the MAS sheets would have
applied them on the second (coloured) layer, given it a firm pressing
down, and then removed the backing sheet.

Unfortunately, I thought
about this as I was laying in bed last night!

I need to try again!

I
used the large snowflake die from the Trim Your Stockings Thinlits Dies,
and the smaller snowflake from the Seasonal Tags Framelits. 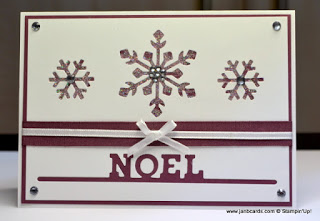 When I die
cut the snowflakes, I saved the die cuts to use as decoration inside the
card.

I also die cut NOEL which is from the Christmas Stockings
Thinlits Dies. 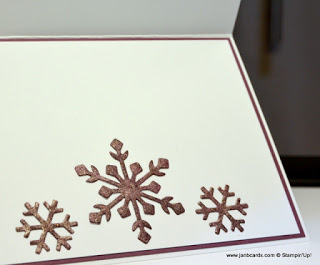 I
decided to use a glue stick on the Fresh Fig CS layer where the snowflakes
would be, but I didn’t want to have Dazzling Diamonds behind the NOEL.

Then I put Tombow on the back of the top layer, and included some areas
behind the die cuts and at the top – even though it’d be going over where the glue stick had been.

I tipped Dazzling Diamonds over the
die cuts, and gently pressed it down to make sure I had plenty of
adhesion!

Apart from one or two small areas where my glue stick went in a
bit of a blob, I’m really pleased with the result!

I added a strip of
Fresh Fig 1/2″ Finely Woven Ribbon around the top two layers, and then
adhered a thin strip of Whisper White 1/8″ Sheer Ribbon on top. 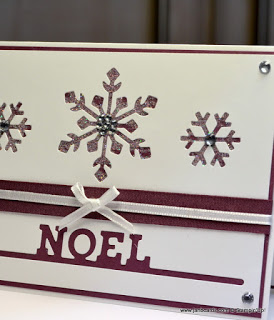 Using
Glue Dots, I adhered a separate small bow onto the white ribbon.

I
adhered this to a Whisper White CS card base, and added one Basic
Rhinestone in each corner, one in each of the two smaller snowflakes,
and a cluster of seven small Basic Rhinestones in the centre of the
large snowflake.

To
decorate the inside of the card I added a layer of Fresh Fig CS with a
layer of Whisper White CS on top.

I took the three snowflake die cuts
I’d saved from earlier, and painted them with my Fresh Fig Marker Pen.

After I’d allowed them a little while to dry, I painted over them with
Clear Wink of Stella Glitter Pen, and adhered them inside the card.

I’m thinking that I might revisit this idea  again next week but with a different design of card, so I can try using the MAS sheet!