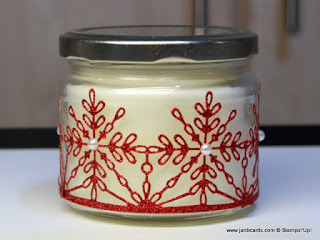 Decorating
candle jars is something I’ve wanted to try for a very long time!

There
was a gentleman selling handmade perfumed candles in jars at the
Tadworth Craft Fair last Saturday, so I bought two red and four creamy
coloured candle jars! 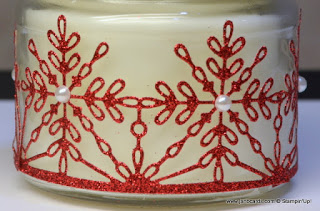 The
timing tied in very nicely with an email I received from a US crafter
who’d see my blog on 7th September 2017 called Don’t Try This At Home!

You may remember the Night in Bethlehem card I’d decorated using the
Swirly Snowflakes Die – I’d used the die with the Adhesive Sheets and
struggled to remove all the little bits and finished up wearing most of them! LOL!! 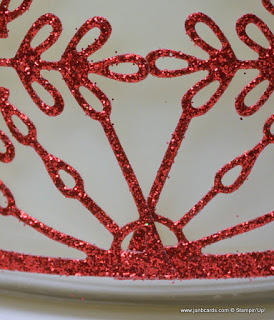 The
email contained a link to a YouTube video that had been posted by Tami
White, showing how to use the Adhesive Sheet with the Swirly Snowflakes
Die, successfully!

I followed Tami’s tips and it worked brilliantly – this is my first decorted candle jar! 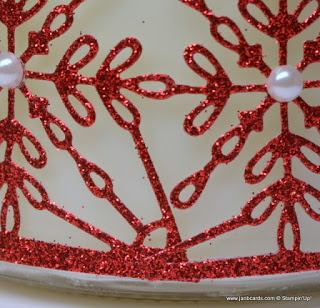 The
first tip Tami gave was to remove the plastic backing to the Glimmer
Paper because it made it easier to get a great cut with the Big Shot.

I
struggled to remove just the plastic sheet, and I took a layer of the
cardstock with it, but I decided not to worry about it and carried on.

I
made my Big Shot “sandwich” using the Big Shot Platform and Thin Die
Adaptor, the Precision Base Plate, the die and Red Glimmer Paper and one
Cutting Mat. 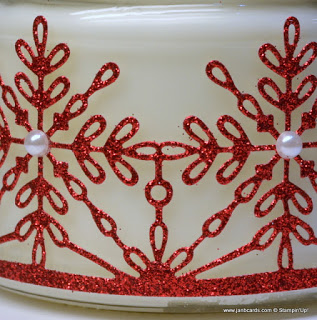 I
placed the Glimmer Paper onto my Die Brush Sponge Mat, and rolled over
the back of the die several times using the Die Brush!

It was so  easy!
All the bits came out beautifully, and my die was ready to adhere to my
jar, but first, I had to make another die so my design would go all
round the jar. 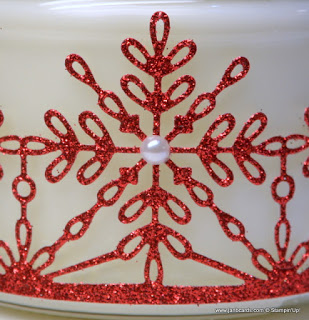 This is where my problems started because the design at
the ends of the die aren’t the same as the joins in the middle.

If you
don’t have the die, have a look at the photograph on page 35 where
there’s a white die cut sitting on  the die.

It’s a fabulous die and is
probably best used on a card so you can really show off the full length to it’s true
beauty.

However,
I wanted to see how easy – or not – it was to add a continuation strip!

I succeeded to a point, and if I were to give this candle to someone as
a gift, I really don’t think they’d notice the joins!

If you look
closely at the photographs, you’ll see some small areas where the
Glimmer Paper hasn’t stuck very well.

This is because they are areas
where I have been manipulating them into position, and in doing so, I
have lost some of the tackiness. Tombow will sort that out for me! 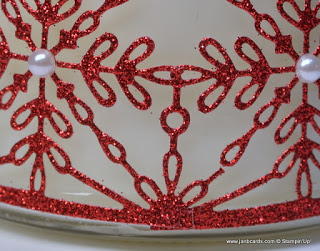 Overall
I’m really pleased with this project and would like to make a video
showing how I did it!

I’ve decorated four of my candles with different designs so far, and am
burning one because I want to know if
there’s a reaction to what I’ve done from a safety point of view.

I also want to know that the adhesives I’m using are going to withstand
any heat.

I’ve also decorated the lid on the other three jars, and will
do this one too. 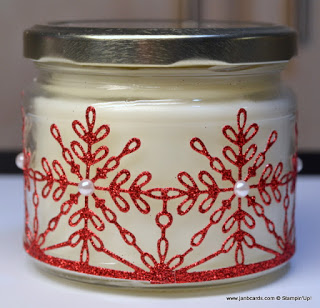 So big thanks to Tami for her video – Using Multipurpose Adhesive Sheets – and to Suzanne for bringing it to my attention – thank you ladies!