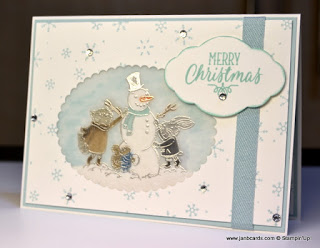 Yesterday, when I’d
finished today’s card, I was really disappointed with it, but when I
looked at it again this morning I decided it was no near as bad as I
thought it was last night!

Amazing what a good night’s sleep can do!
LOL! 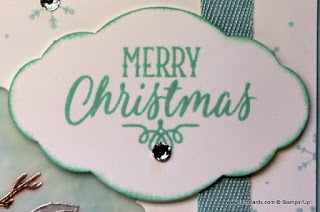 With
hindsight, I should have sponged the aperture to the window, and
possibly all round the edge of the top layer, as I did with the
sentiment.

My idea started with creating a stained glass effect which was
featured in the latest Demonstrator’s magazine.

I thought black
embossing powder would be too dark – and we don’t sell it either! – and
white would be too light! 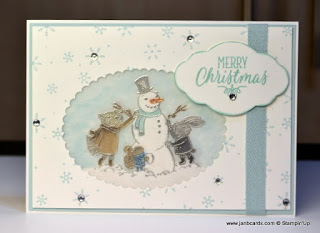 I chose to use silver, but think this was too
light, too.

I started my card by
going over a piece of Vellum Cardstock with my Embossing Buddy, and
chose the snowman image from the Mistletoe Friends Stamp Set.

I stamped
the image using Versamark, and sprinkled with Silver Embossing Powder.

After shaking off the excess powder, I used my Heat Tool to heat set it. 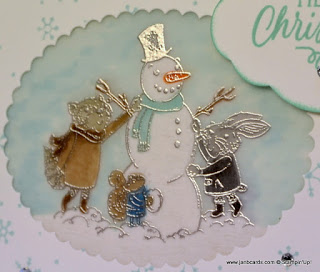 I went around all the unpainted ares with Soft Sky on the uppermost of the image and white on the lowest part.

I took a Whisper White Cardstock (CS) layer, and die cut an aperture using the largest scalloped die from the Layering Oval Dies, towards the lower half on the left hand side.

I took another piece of Whisper White CS the same size, and dry embossed it using the Softly Falling Embossing Folder.

I made a sandwich of the image between the two Whisper White layers, and although you can’t see it in the photographs, the bumps from the layer underneath the image adds some dimension. 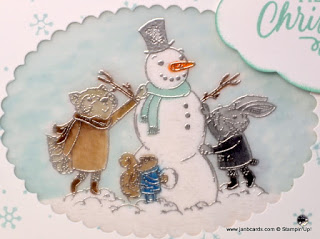 It was at this stage I was beginning to get worried as the card looked rather wishy-washy!

The first addition was to replace the scalloped oval I’d cut from the aperture, rested it back where it came from, and gently stamped over with a snowflake stamp.

The stamp was from the Tags & Trimmings Stamp Set, and I stamped using Soft Sky Ink. 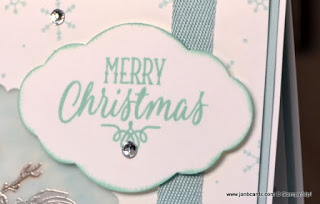 This definitely improved the overall look of the card, but I was still far from happy!

The next step was adhering the image layer to a layer of Soft Sky CS, and I wrapped a strip of the 3/8″ Soft Sky Classic Weave Ribbon round the right hand side, adhering it at the back using Fast Fuse.

Then I used Tombow to attach these layers to a Whisper White card base.

I stamped the sentiment, which is from the Hang Your Stocking Stamp Set, using Pool Party Ink on a piece of Whisper White CS.

I punched it out using the Pretty Label Punch, and then sponged around the edge using a Dauber and Pool Party Ink.

I adhered this in place, over the ribbon, using Dimensionals, and completed the look by adding some Rhinestones in the centre of some snowflakes. 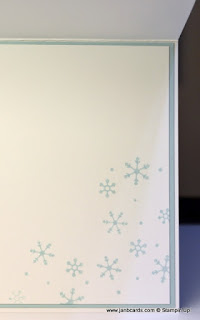 Inside the card I added a layer of Soft Sky CS, and then a layer of Whisper White CS onto which I’d stamped some snowflakes the same as the front of the card, in the bottom right hand corner.

Not quite the card I had in mind, but the final result, although not great, is quite pleasant………………I think!