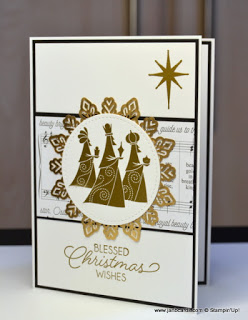 No surprises there! LOL!

I started with a piece of Whisper White
Cardstock (CS) which I wiped with my Embossing Buddy. 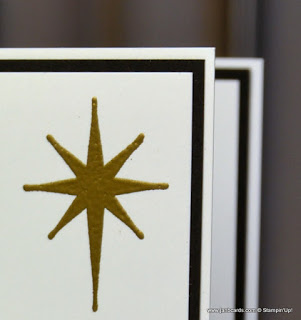 I inked the three
wise men stamp with Versamark and stamped it on the cardstock, making
sure I left enough room to die cut it with the third largest Stitched
Shapes Circle Framelit.

I sprinkled it with Gold Embossing Powder, and
then heat set it using my Heat Tool. 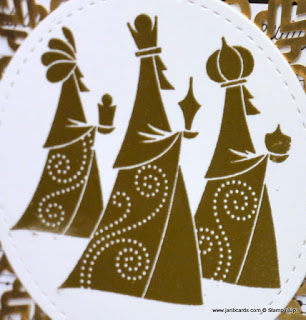 Using
my Embossing buddy again, I wiped over the bottom half, and the top
right hand corner of the top layer. 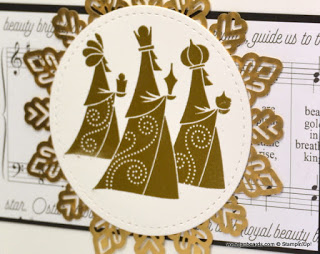 As I was going to stamp directly
onto cardstock with clear mount stamps, I set my Stamp-a-ma-jig up for
the sentiment and the large star stamp from the Night In Bethlehem
Stamp Set.

I inked and stamped the sentiment in the bottom part of the
top layer, and heat set it using Gold Embossing Powder.

Next I stamped the
star in the top right had corner and followed the same procedure as
before. 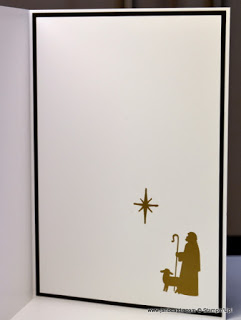 I
cut a band of Basic Black CS approximately just over a third of the height of top
layer.

Then I matted a layer of a white sheet of music on top – the
music shown is We Three Kings!

I adhered the two layers together and
then onto the top layer.

Next I adhered the three wise men to the Gold Foil
Snowflake, and then adhered it to the centre of the central strip. 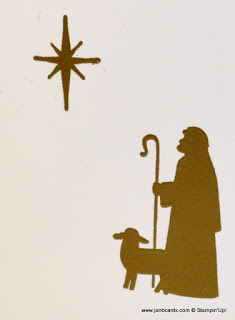 To
decorate the inside of the card, I decided to use the shepherd and his
sheep stamp from the Night in Bethlehem Stamp Set.

I stamped him in the bottom right
hand corner as he was facing into the card, which allowed me to stamp the
smaller star from the Three Wise Men from Afar Stamp Set, which tied the
front and inside of the card together really well. 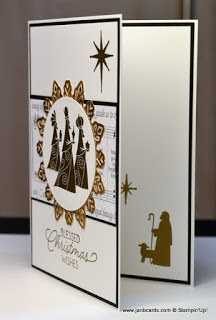 As I did previously,
I wiped the corner using my Embossing Buddy and heat set the two images
in Gold Embossing powder.

I added the Whisper White layer to a layer of Basic Black CS and then adhered it inside the card.