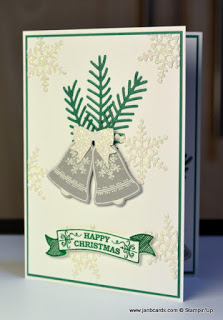 I’m always looking for
different ways to decorate the backgrounds of my cards, rather than
using Designer Series Papers, dry embossing or stamping.

Yesterday I
thought about using snowflake die cuts, and absolutely love the result!

The
idea of the bell and the fir was inspired by a card that was posted to
Pinterest five years ago, so that was the starting point for today’s card. 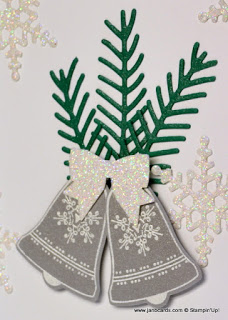 The Pinterest card was stamped, but I decided to use die cuts as we have
two stamp sets with co-ordinating dies that are ideal.

Then I painted them using my Wink
of Stella Clear Glitter Pen.

To make the bells, I took a scrap of Smokey
Slate CS and wiped over it with my Embossing Buddy.

Using Versamark Ink,
and one of the bells from the Seasonal Bells Stamp Set, I stamped four
bells.

After I had dipped them in my Whisper White Embossing Powder box, I
tapped off the excess powder and heat set the images using my Heat Tool.

There were two reasons why I stamped four bells! 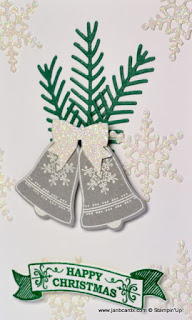 First was because that
was the size of the scrap of paper I’d picked up, and second was
because, although I knew I wanted two bells for the front, I wasn’t sure
what I’d be doing on the inside.

This is how I end up with so many
images stamped/heat embossed/punched/ die cut/etc which I use in later
projects!

I decided to use Dazzling Diamonds Glimmer Paper snowflakes,
because I had a small pile of six of them sitting on the shelf behind me, and which had been there for a couple of weeks – a leftover from a previous project! LOL!

Two
of them in the pile have been used on this card, and I die cut an extra
four, plus another four of the smaller snowflake which came from the
same set of dies – Seasonal Tag Framelits Dies. 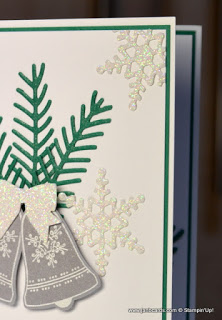 As I didn’t use the
smaller snowflakes on this project, they’re waiting for a future
project!

FYI this set of dies co-ordinates with the Seasonal Chums Stamp
Set, and the Pretty Pines Thinlits co-ordinate with the Christmas Pines
Stamp Set.

I
punched the bow I’ve used on the top of the bells using the Holly Berry
Builder Punch, and more Glimmer Paper. Then the fun really started!

I
played around with lots of different layouts, but always leaving space at
the bottom of the card for the sentiment. 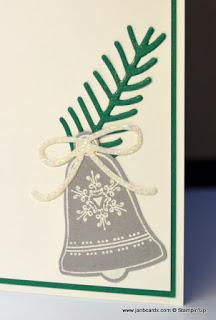 I hadn’t given this any thought
at this point because I would decide once I’d finished the layout of everything else.

Once
I was happy with the layout, I used my Fine Tip Glue Pen to adhere the
three branches to a layer of Whisper White CS, and these included two smaller branches, and one medium branch, which I’d cut off two sets
of the lower branches.

When they were in place, I painted two of the bells using
the Clear Wink of Stela Glitter Pen, and adhered them, making sure they
covered the ends of the branches, using Dimensionals.

Then I adhered the
bow in place using Tombow on the back of the bow tails. 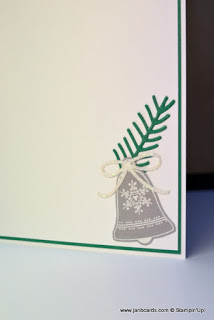 Next
it was time to adhere the snowflakes in a random design around the
bells, and like when painting this kind of background, I made sure some
went off the edge.

When they were all adhered in place, I turned the
layer over and trimmed off the overhanging snowflakes. I adhered this
layer to a layer of Emerald Envy CS, and then onto a Whisper White CS card
base.

I
decided to use the Happy Christmas sentiment from the Seasonal Bells
Stamp Set, and then to cut it out freehand! 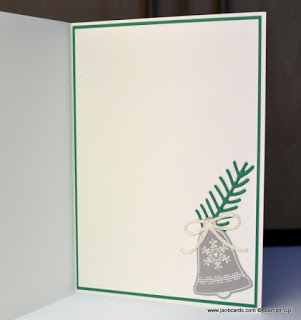 So I took a scrap of Whisper
White CS and wiped over it using my Embossing Buddy.

I inked the stamp
in Versamark, then in Emerald Envy Ink, and quickly dipped the images in my box
of Clear Embossing Powder.

After I’d heat set the sentiment, I painted
it with my Clear Wink of Stella Glitter Pen, cut it out by hand, and
then adhered it to the card front using Dimensionals.

To
finish my card, I added a layer of Whisper White CS onto a layer of
Emerald Envy CS and adhered it using Tombow. 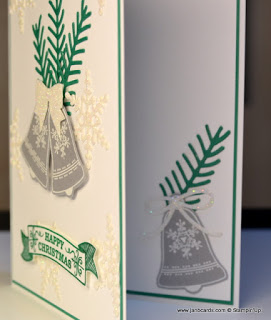 I arranged a bell and sprig
of fir in the bottom right hand corner, and added a Dazzling Diamond
Glimmer Paper Bow I’d found in my packet of cut outs made but not used!

I
have a very busy day ahead of me today, as we are doing a craft show on
Saturday, and I have masses of projects to sell, but I haven’t prepared
them i.e. priced, wrapped, labelled, etc! 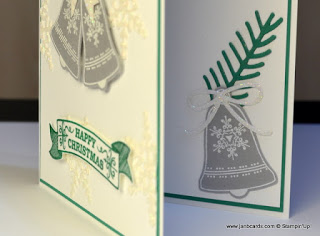 I hope you have a great day, and until tomorrow, happy crafting.