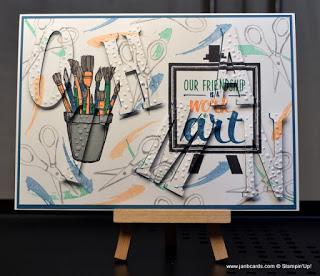 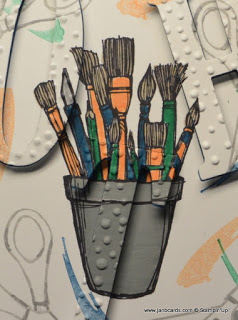 I hope you’ve had a
great weekend. Yesterday was hubby’s birthday, and as he was working, we
weren’t able to celebrate, so we’ll be going out for dinner this evening. In the UK, on 5th. November,  it’s Guy
Fawkes Day, or Bonfire Night, when everyone lights bonfires, and let off
fireworks. This is in memory of the man who was arrested in 1605, when
he was caught guarding a pile of explosives that had been placed under
the House of Lords! So every year it sounds like everybody’s celebrating
hubby’s birthday!LOL! 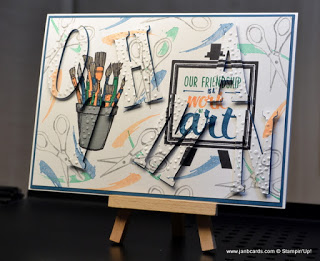 Today’s card is a 7″x5″ eclipse
card I made for Othman, and this was the only way I could get all six
letters on! As I used an artist’s theme, messy fitted the
bill nicely! I chose three main colours plus neutrals. They are Peekaboo Peach,
Dapper Denim, Emerald Envy, Smokey Slate Crumb Cake and Basic Black. 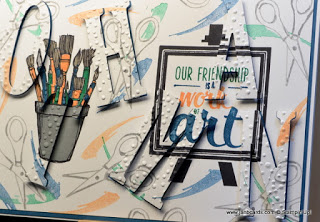 I
started with the pot of brushes from the Crafting Forever Stamp Set,
and the easel and sentiment from the Painter’s Palette Stamp Set – two
stamp sets I think really complement each other beautifully! I used the
same three colours for the paint brushes as I used for the writing on
the easel.  At this point it looked too clean, so I set about remedying
this, and started by stamping scissors from the Crafting Forever Stamp
Set, randomly around the two main images. 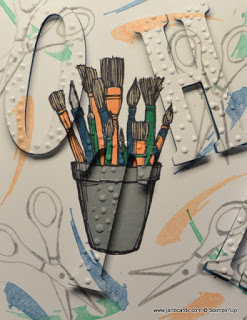 I wanted more colour, so I made a mask for the scissors using a Post It
Note and stamped paint splashes in the same three main colours randomly
over the background. As often happens when stamping over masks, I had a
lot of white areas where the stamp hadn’t been pressed down quite hard
enough, and other areas where I’d pressed too hard and managed to catch
the edge of the stamp. For the first time ever, I wasn’t concerned,
because I think it just adds to the general messy look you’d see in an
artist’s studio! 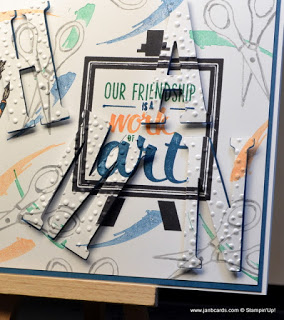 I
die cut the letters and decided to emboss them using the Softly Falling
Embossing Folder. I thought with such a busy card, the letters would
stand out a bit more if they were embossed. Also, one of my viewers of my eclipse card video asked
what my Noel card would look like if it was the letters that were
embossed rather than the background – a good question!

Othman
was really pleased with his card, but he did say he almost missed the
letter T – he said he thought I’d forgotten it! LOL! Almost-multicoloured and therefore outside my comfort zone, but I’m pleased with the result!

That’s it
from me today. I hope you have a great week, and until tomorrow, happy
crafting!