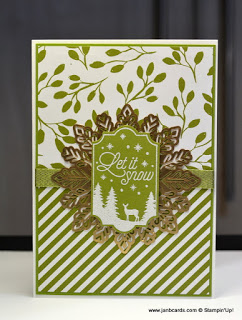 It’s now ten months
since I first started sharing the decorated insides of my cards, and
most of the time it’s not a problem deciding what image or pattern to use on the inside.

I’ve seen this Let It Snow stamp used on quite a lot of cards and I
wondered what would I do inside a card.

So I decided to make a card to find
out – although I’m sure I’ve already used this stamp, but I just can’t
think what I did for the inside! 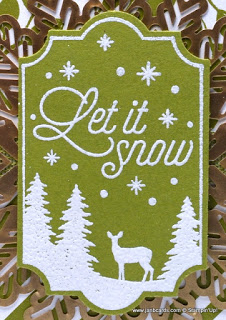 The
fun started when I wondered if I could stamp the bottom half of the
stamp without the edge lines showing!

I inked my stamp using Old Olive
Ink, having masked off the top half of the stamp.

To remove the green ink from the curved tail of the letter S, I used a Blender Pen, and also
all the ink on the parts I thought would be stamped as straight lines i.e. the outlines. 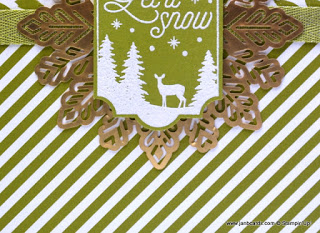 The stamp looked very moist so I stamped it onto a piece of scrap paper without huffing on it.

I was surprised to see feint outline edge lines all around, even though I
had cleaned my stamp properly. 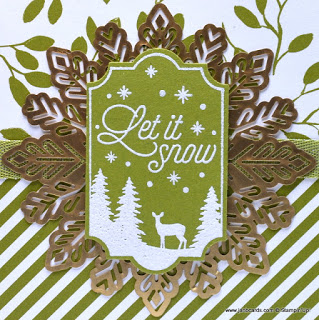 The problem was most likely I need to wash my
cleaning mats!

I was also disappointed at how many straight edges had
stamped on the bottom half of the image, proving I hadn’t removed as much ink as I thought I had – so glad this was on scrap paper!

I
gave up this idea, and had a look through all my stamps to see if I had
a small image of a reindeer that I could use to decorate the inside with!

The closest I found was in the Hearts Come Home stamp set; it’s three
reindeer sailing through the sky with Father Christmas.

This is when I
had the idea of following through with what I had done on the front of the card, which was white heat embossing the image on Old Olive Cardstock (CS). 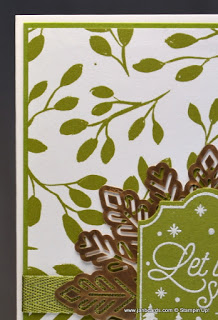 If I did this it would mean the sentiment and greeting would both be going on coloured cardstock.

I decided that Old
Olive is light enough for this, and decided to go for it, because it would make a pleasant change from the usual white!

This is a first for me as all my inside layers so far
have been white, but it won’t be the last! 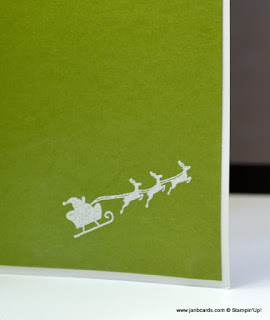 I adhered the DSP to
the Old Olive CS layer and then wrapped a piece of 3/8″ Mini Chevron Ribbon around this layer and adhered at the back using Fast Fuse.

I wiped a
small piece of Old Olive CS with my Embossing Buddy, and then stamped
the Let It Snow Stamp from the Merry Little Labels Stamp Set using
Versamark. 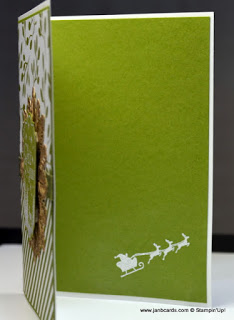 After I’d covered it with Whisper White Embossing Powder,
I heat set it using my heat tool.

I used Tombow to adhere a Gold Foil
Snowflake in the centre of the card, and then added the Let It Snow Tag
which I’d punched out using the Everyday Label Punch, over the centre
using Dimensionals.

I
adhered the Old Olive layer with the white embossed sleigh and
reindeer image inside the card. 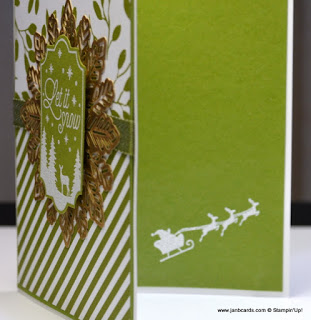 As I’m sitting here writing I’m looking at my card, and I’ve decided I need to add some Basic Rhinstones to the
round snowflakes on the Let It Snow Tag on the front of the card – just to
give the card a bit of sparkle!

I hope you like today’s card! Today’s the last day I have to get ready to go to OnStage tomorrow. 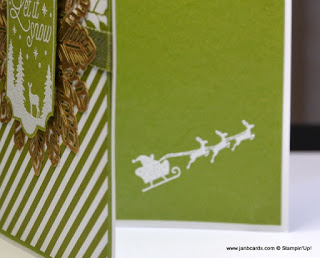 All I have to do is to make three team gifts, a video, and a few other small jobs, and then I’m done.

I don’t think I’ve ever been this well organised before! LOL!

I feel very relaxed and am looking forward to the Convention.