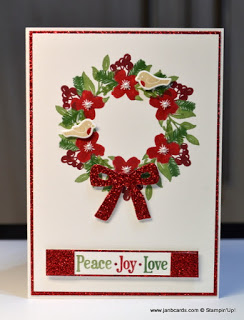 Earlier
today I uploaded my video which shows how I made the wreath card
I shared here with you two weeks ago.

I have thoroughly enjoyed making
these cards even though they take a lot of patience, I found them very relaxing!

The
only changes I made for the video are the bow and the pearls.

When I
made the second card just prior to recording the video, I used a Red
Glimmer Paper Bow I found in the Red Glimmer Paper Ziplock Bag, which
holds die cuts intended 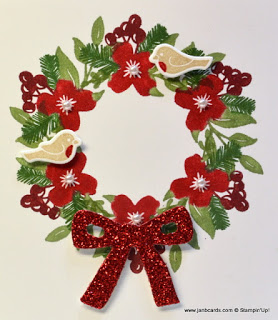 When I looked to find out which set it came from, I found it was a retired
set, and I’d punched the holes on either  side to make it look more
realistic! 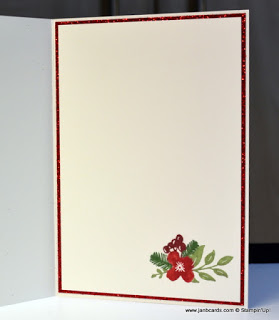 However
I did learn two things from this bow!

Firstly, I thought a thicker bow
looked much nicer on the wreath than the one I’d used on my original
card.

Secondly, I thought the bow looked a lot nicer on the bottom part
of the wreath.

This meant I had to find a current larger bow for the video.

I found it
in the Everyday Jars Framelits.

I
unwittingly managed to get some paint on the sentiment of the second
card, and I needed to find a way to disguise it.

My first attempt was to
use my Tombow Mono Eraser, but it didn’t work, which rather surprised
me as it wasn’t particularly dark nor spread over a large area.

I
thought about putting a small bird over it, especially if I could create robins!

This
bundle was a limited edition last year if I remember correctly, 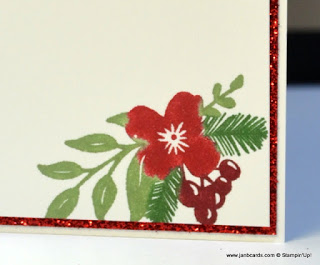 I
stamped two birds, each facing different ways, in Crumb Cake Ink, and
used the pen end of my Real Red Marker Pen to colour their breasts.

Then I die cut them.

The plan was to adhere them at either end of the
sentiment and therefore covering up the mark, but they didn’t look right.

I played around with various options and settled on Red Glimmer
Paper Squares at each end of the sentiment, and then the birds both
sitting on the wreath! 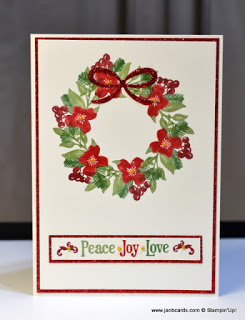 The red on the sentiment looks a bit “heavy” but
the birds look great!

Maybe I’ll add stars, or large Basic Pearls to break it up a bit – I’ll think about it.

This morning I’m off to meet my daughter for coffee, for the second monthly special time together.

That’s it from me today. Until tomorrow, happy crafting. ☺