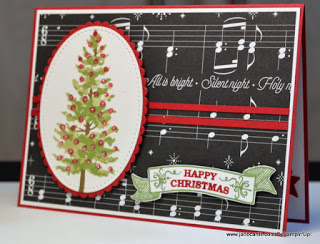 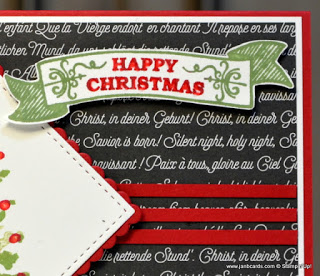 Yesterday
I had my first play with the Season Like Christmas Stamp Set.

This is a
four-step stamping set and will be even easier with the new
Stamparatus when it arrives!

It took me a few practice goes to decide on
a suitable colour combo, and I’ve decided it’s best to
use two similar greens, and stamp the bigger tree stamp in the lighter green
first.

I started with Pear Pizzazz and then moved onto Wild Wasabi.

For
the tree trunk I used Soft Suede and Real Red for the berries.

It was so
easy and I was really pleased with the results. 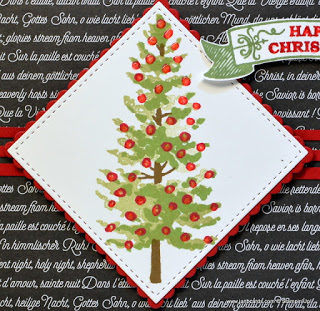 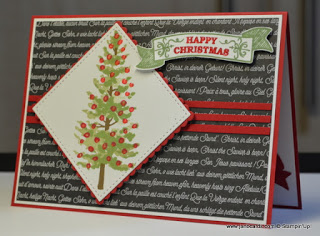 Both
cards have a Real Red Cardstock (CS) card base, with a layer of Whisper
White CS and a top layer of Merry Music Specialty Designer Series Paper
(DSP).

The two different designs of DSP I have used on these cards are on the
reverse of each other.

Apart from having a go at the four-step stamping,
I also wanted to have a play with the Fine Tip Glue Pen.

On the first
tree, I put a small blob of glue on to each berry and put it to one side
to see if it would dry as a blob, or if it would flatten out.

On the
second tree, I put a small amount of glue on each berry to see what that
would look like dried.

I did the same on the third tree, but sprinkled
some Dazzling Diamonds Glitter over it very lightly.

As I was working on the sentiments, I dropped a piece of paper on
the first tree, which was the one I wanted to see if they’d stay as
blobs or become flattened as they dried.

I found out if a piece of paper is
dropped on them, they flatten! Grrr! 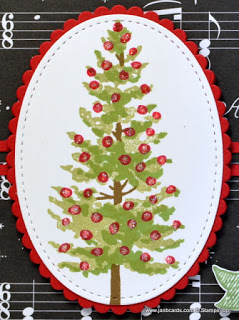 Rather than just allowing the glue
to dry in a very indiscrimate manner, I covered the whole tree in
Dazzling Diamonds Glitter.

I gave it several seconds for the glue to
adhere to as much glitter as possible, and then shook off the excess.

I
used my pointed tweezers to manouvre the glitter back onto the berries,
or I removed it off the card altogether.

I was pleased with the level of success I
had doing this, but I was very disappointed that the berries on the first tree were looking very pink!

I
finished off two cards with tree two in the diamond shape, and card
three in the oval.

Instead of adding ribbon to the two cards, I adhered
two or three narrow strands of Real Red CS across the front of the card and
beneath the tree image. 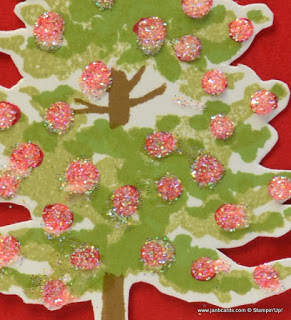 I chose the sentiment from the Holly Berry
Happiness Stamp Set, and coloured it by painting with my Marker Pens in
Real Red and Wild Wasabi.

After I had fussy cut them both, I adhered
them to the card front using Dimensionals.

On
the sentiment on the card with tree two, I went over the letters with
the Fine Tip Glue Pen sparingly and allowed to dry.

I won’t be trying that idea again! LOL! 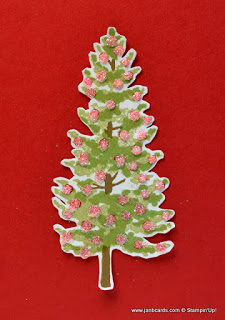 Inside both cards, I
adhered a layer of Whisper White CS, and added a punched bow, which I’d
stamped in Real Red Ink on Real Red CS – the stamp was from Holly Berry Happiness Stamp Set.

The
last photograph shows the tree with the pink berries, and I have no
idea what to do with it at the moment! Any suggestions?

Yesterday evening, hubby and I had a super dinner at out favourite Singaporean restaurant, which is called Singapore Orchid – the food there is amazing.

I hope you have a great weekend, and until tomorrow, happy crafting.