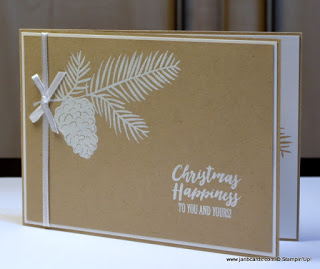 I
love the combination of white on Crumb Cake, especially when the white
is heat embossed – the magic of heat embossing never fails to amaze me!

Not
surprisingly, I started my card with a base of Crumb Cake Cardstock
(CS), with a layer of Whisper White CS and a top layer of Crumb Cake. 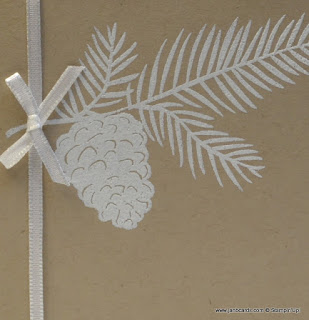 I
wanted to do a fir branch with a hanging pine cone, so I took a piece
of scrap paper so I could play with different combinations and
arrangements.

Once I had decided how I wanted my design to look, I had to work out if I could do it by masking off part of the pine needles on the stamp using tape, or
stamping the pine cone first, then masking it before stamping the fir branch. I concluded that, as there were just four pine needles
that would be overlapping my pine cone, I was lucky that the easy
option of tape would work – and work it did…………….brilliantly! 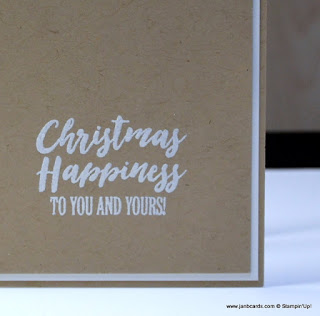 I
wiped over the top left hand corner of my Crumb Cake layer using my
Embossing Buddy, and covered the four pine needles using a small piece
of tape. I inked the fir branch in Versamark, then I removed the tape, and
stamped the image.

Next I took the small, solid pine cone stamp, inked it in Versamark, and
stamped it so it was sitting beautifully positioned on the fir branch, without overlapping any pine needles!

I
dipped the cardstock into my box of Whisper White Embossing Powder, and made sure the entire image received a good covering. I shook the excess back into the box, and then tapped
the rest off. I heat set the powder using my Heat Tool, and enjoyed watching the magic happen!

Next
I wiped the bottom right hand corner of the Crumb Cake layer with my Embossing Buddy, and inked
up the sentiment with Versamark. 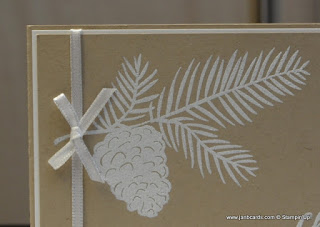 I stamped down where I felt it would
balance well with the fir branch and pine cone.

Then I dipped the cardstock
back in the box of white embossing powder, once again making sure it
received a good covering of embossing powder. After I’d shaked the
powder back into the box, and tapped off the excess, I heat set as
before. 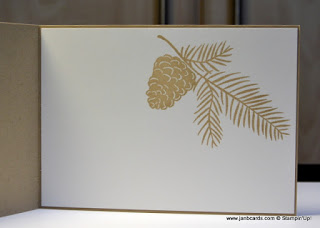 I
adhered the top two layers together, and using Fast Fuse, adhered some
1/8″ Whisper White ribbon around on the left hand side.I positioned it so I could put a bow on it and it would be sitting over the end of
the branch. I tied a small bow and adhered it in position using Tombow,
and then adhered the layer to my card base. 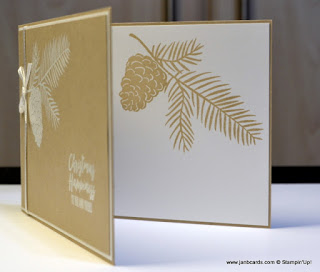 To
decorate the inside of the card, I took a layer of Whisper White CS,
and using Crumb Cake ink stamped the same fir branch and pine cone image
arrangement on the right hand side. I was really pleased with the
finished effect, and adhered it in place using Tombow.

This morning I’m off to the optician for my annual eye check; a little bit late because I should have gone in August! Then I have a little bit of shopping to do, collect from the dry cleaners, and then back home to finish prepping for the weekend’s class. I’ve prepared the two cards we’ll be making, and now have to do the 3D project, which I think may be a third card – possibly!