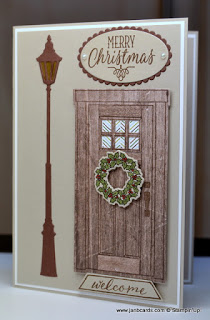 I
was really pleased with the progress I made yesterday preparing the new
catalogues for posting to my customers.

I’m about halfway through and now that I have a good system set up, I’ll
finish them off today.

Hubby will get them posted on Friday, and
I’m really hoping that will plop through everyone’s letterboxes on
Wednesday, 27th December, which will be the same day I post my second
video showing the products I’ve bought from the new catalogue! 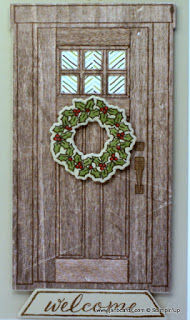 When
I decided to take time out to make a card to share with you today, I
didn’t feel like making another Christmas card.

As it has been months
since I’ve made any non-Christmas cards, I really didn’t know where to
start.

I challenged myself to make a non-Christmas card using a stamp
set that has been primarily designed for Christmas, but could easily be
used for other occasions.

At Home With You fitted the bill brilliantly,
and I thought I’d make a a New Home card, which finished up as a
Christmas Card!

Oh well never mind, it’s a nice card even if it is going
to be packed away until next Christmas!

I
was going to stamp a piece of Whisper White Cardstock (CS) with the
Hardwood Background Stamp, although I hadn’t thought about which colour, to use
for the door.

I changed my mind and decided to use a sheet of Wood Textures
Designer Series Paper (DSP).

I wanted a fairly darkish colour but a
design that looked like a large piece of wood intead of planks, or
panels!

I
stamped once so the grain of the wood was going vertically, and then twice
going horizontally. 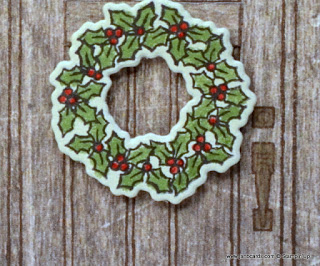 As the DSP is in 6″ x 6″ sheets, I couldn’t get the
complete door in horizontally, so I did one stamp from the top as far
down as I could.

Then I turned the stamp around 180°, and stamped the
lower part of the door making sure I included the the two horizontal pieces at the bottom of the door. 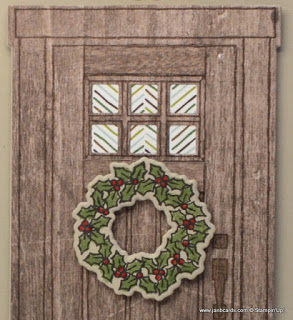 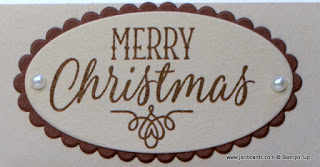 I
fussy cut the smaller piece of these two planks, as well as the two horizontal
planks above and below the door window.

Using Tombow I adhered all
three pieces to the door, which I had die cut using the die from the At
Home Framelits Dies.

There’s also a small die in the set that cuts out
the windows, so I used that and filled the windows with some “wallpaper”
from the Coffee Break DSP.

I wanted to adhere the door to the top layer of the card, which is
Sahara Sand CS, using Dimensionals, but I wasn’t happy that it would be a good idea given that the door was DSP!

I
decided to die cut another door, but this time in Sahara Sand CS, and I used Tombow to adhere the DSP door to it.

It worked a treat!

I
stamped the front door welcome mat on a piece of Sahara Sand CS and Early
Espresso Ink.

After I’d die cut it, I adhered at the base of the door using Dimensionals! 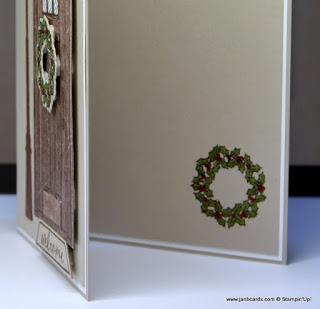 I used the die from the At Home Framelits Die to die cut the wreath, and then I adhered it to the door just below the window using Mini Dimensionals.

Using Early Espresso Ink, I stamped the sentiment which is from the Hang Your Stocking Stamp Set on to a piece of Sahara Sand CS.

I die cut the sentiment using a straight cut die from the Layering Ovals Framelits Dies, and adhered it to an Early Espresso scalloped oval I’d die cut with a die from the same set of Framelits. 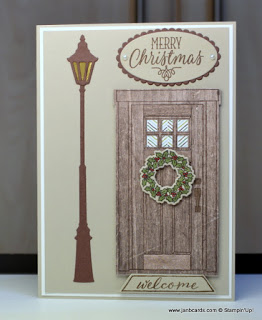 I adhered it above the door using Dimensionals.

For
the lamppost I used Chocolate Chip CS, and die it using the Christmas
Lamppost Thinlits Dies.

Using Gold Foil, I used part of the “flower pot” die to die cut the backing for
just one lamp – the die cuts three!

Using Tombow I adhered the gold “flower pot” at the back of the lamp, and then adhered the lamppost, still using Tombow, to the left-hand side of the door. 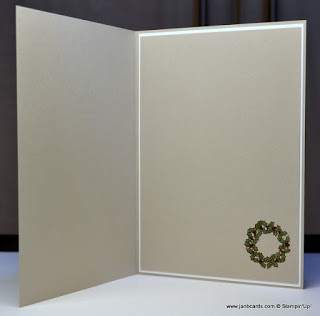 Then I used Tombow to adhere the top Sahara Sand CS layer onto a layer of
Whisper White CS, and then adhered it to the Sahara Sand card base.

I stamped and painted a
holly wreath the same way I did the one on the front of the card.

That’s it from me today! I’m offto finish getting my customers catalogues ready first, and then I going to see if I can get back into making a non-Christmas card to share with you tomorrow, so until then, happy crafting!