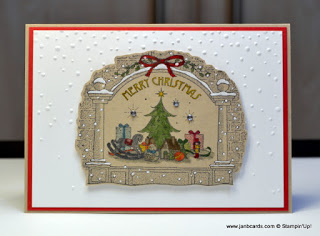 Yesterday
I enjoyed colouring the large image from the Best Gifts Stamp Set!

Although I
tried to use as many different colours as possible, the result
wasn’t as bright as it would have been if I’d used Whisper White as a background.

The reason I’d used Crumb Cake was to give the bricks and the background colour without having to colour it all in. 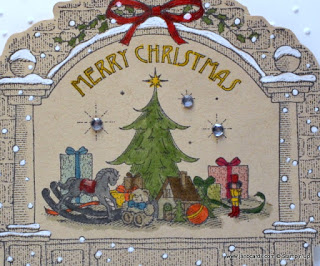 This was a good decision, because it also allowed me to use my white gel pen on the snow.

When it was time to tidy up, I
counted fifteen Marker Pens as the number used, excluding the white gel pen!

When
I had finished colouring, I took a pair of Paper Snips and cut around
the edge, leaving a small edging of Crumb Cake Cardstock (CS). 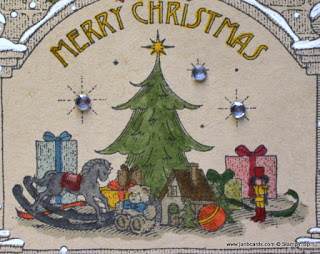 I tried
several different options for layering my card and settled on a top layer
of Whisper White CS, then a middle layer of Real Red CS and a card base
of Crumb Cake CS.

Although I like the smooth look of the Whisper White on
top, I thought I’d try putting it on a layer that had been dry embossed
using the Softly Falling Embossing Folder.

I knew if I didn’t like it, I
could put the layer into my box of layers, and save it for another
occasion! 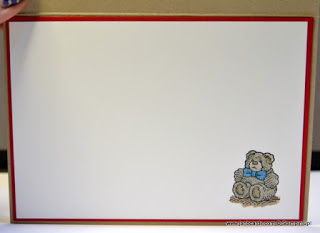 As
it turned out, I thought the Softly Falling Snow, really picked up the
snow that I had coloured with my white gel pen – the two elements were
designed to go together!

For
the inside of my card, I stamped the teddy bear image from the stamp set, and
painted it in the same colours I’d used on the front image. 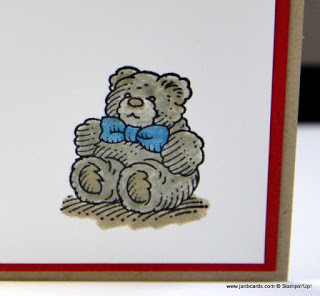 To colour
the main body of the bear I used my Sahara Sand Marker Pen, and the pads on his
feet, and the inside of his ears are Crumb Cake.

For the bow I used
Marina Mist, and the carpet he’s sitting on was Crumb Cake.

On
Wednesday, I wrote that I was meeting  with my daughter for coffee, and we chose to meet at a local coffee shop which is part of a framing shop.

In
fact, it’s the shop where we took the hand-made elephant quilt we
brought back from Thailand with us, to be framed.

While we were in the coffee shop, I
noticed a lovely wooden advent calendar house, and I bought it.

Before I
drove home, I went to the local supermarket, and bought some chocolates to
fill the twenty four boxes for hubby and I to share! 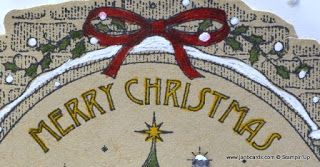 I showed it to him when he arrived home, and we decided he’ll
have the odd numbers, and I’ll have the even numbers, and we share the
chocolate anyway! LOL!

Next
year we’re planning to buy little gifts for each other; I’ll put his in
the odd numbers and he’ll put mine in the even numbers! 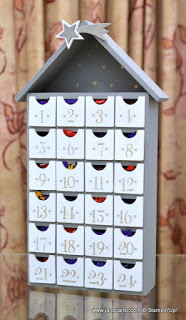 We used to do
this for our grandchildren and also for each other, but it fizzled out
when we stopped doing it for Jack and Molly!

During
December, I keep a tin of chocolates, like Quality Street or
Celebrations (chocolate covered sweets) by the front door and I offer
them to everyone who calls at the house. I like to feel I’ve started a new tradition! LOL!

It’s normally the postman or
couriers, but it’s always well received and appreciated! It really
doesn’t take much to make someone smile!

That’s about it for today! I hope you have a great weekend, and until tomorrow, happy crafting.