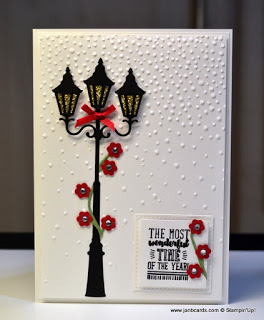 Today’s
card was inspired by a card I made a few years ago, in my pre-Stampin’
Up! days.

Apart from the slightly wonky sentiment, I’m happy with the
finished result, not least because it’s one of my favourite colour
combos: black, white and red! 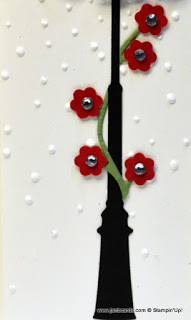 I used the dies of the lamps
to draw round to cut out the backing in Gold Glimmer Paper, and then the
penny dropped!

At last, I finally realised what the die of three “flower pots”
was for! DOH!!

I
used a sheet of Whisper White CS for the top layer of my card, and dry
embossed it using the Softly Falling Embossing Folder.

At this stage I
wasn’t very sure how I was going to do the climbing poinsettias around
the lamppost.

I decided to adhere the lamppost to the top layer, and work around it
from there!

I used Tombow to adhere the post, and then I adhered the lamps using Dimensionals. 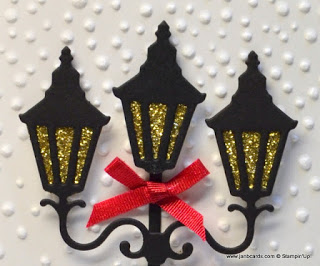 My flowers are in Real Red CS, and were punched out using
the Tree Builder Punch.

I went through my three folders of dies to find
something I could use for the green climbing stem for my flowers, and was
very pleasantly surprised at how many possible options there were for
me.

I decided the best one for my needs on this card was a die in the Flourish
Thinlits Dies, and consists of a wavy green stem with six small “bobbles” at
the end of side shoots.

At this point I wished I hadn’t adhered the
lamppost down, but it was too late to worry about it and more important
to find a workaround, which is exactly what I did.

The answer was to cut
the stem and adhere on the top layer so only the uppermost of the plant
could be seen. I found it necessary to cut one of the bobbles off near the
top so I could add the flowers without it looking overcrowded!

I
chose the sentiment from the Brightly Lit Stamp Set, and heat embossed
it using Basic Black Embossing Powder. 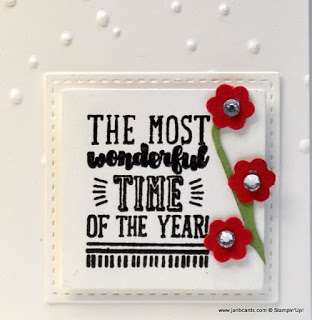 I was going to use Wild Wasabi for my layers but changed my mind
and decided to stick with all Whisper White CS.

I took a card base of
Whisper White CS and adhered a layer on the front, and on the inside using
Tombow.

On the front of the card I adhered the dry embossed layer using
Dimensionals.

I adhered the sentiment to the layer
using Dimensionals, and then I adhered it to the card front using Tombow.

To finish the front of the card I added Basic Rhinestones to the centres
of the flowers, and a small Real Red Ribbon in the middle of the three
lamps. 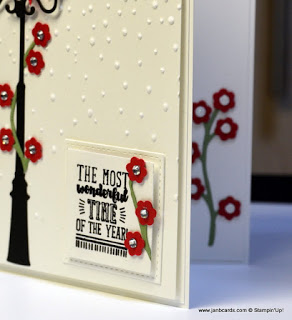 Then to finish the inside of the card, I added a complete stem with
six bobbles, and adhered one Real Red CS flower on top of each.

Instead of Basic
Rhinestones for the insides of the flowers inside the cards, I used the 1/8″ Handheld
Circle Punch, and punched out six Dazzling Diamonds Glimmer Paper circles, which I adhered in place using Tombow.

Vicki and her hubby are coming round for dinner this evening, and last night hubby decided to put up some Christmas decorations! 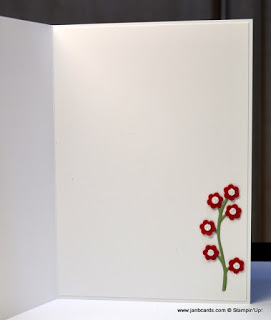 He did an amazing amount in just two hours, but we are now left with a house that looks like a warehouse full of cardboard boxes, a Christmas tree with some lights and an angel on top, and so many colourful lights in the front garden, it could compete with the Blackpool Illuminations!