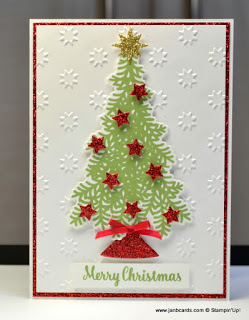 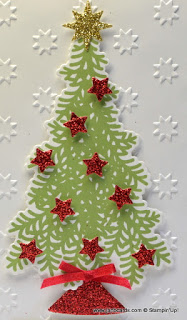 Yesterday morning I was driving along a
fairly quiet surburban road, near where I live, and I was faced with a
woman driving a white four by four heading straight for me.

I tooted and
swerved to get out of her way!

The sound of me tooting brought her to
her senses, and she also swerved.

Needless to say I felt really shaken, and pulled over to phone hubby.

After chatting for a few minutes, I
decided I was OK to carry on to church.

When I arrived, I realised I
wasn’t doing as well as I thought I was, so I phoned Vicki to come out
to see me in the car park.

We spent several minutes chatting, and then she took me
to a quiet area in the church to get me a cup of very sweet tea.

Church is always a
good place to be, but especially good when you’ve just had the fright of
your life!

There
wasn’t any Sunday School for the children yesterday, as they were included
in our service.

It was delightful to see them on the stage singing, and
then helping the preacher by holding up very large pictures he was using
to explain the story of Christmas.

It was just what I needed! 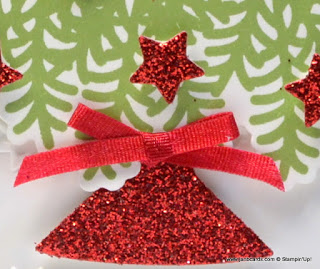 In
the evening our son LD came round for dinner with his delightful
girlfriend Sasha.

Conversation flowed, and time went far too quickly! In what
seemed to be next to no time, they had to make tracks home!

I
made today’s card yesterday afternoon but I wasn’t feeling very
inspired, until I came to thinking about a “skirt” for the Christmas
tree!

I wanted to create a Christmas tree and decorate it would lots of
multi-coloured baubles. 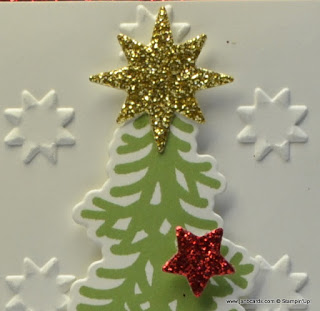 As you can see that idea didn’t work, so I
changed to Red Glimmer Paper Stars.

I dry embossed the top layer using the Oh My Stars Embossing Folder.

As I showed on yesterday’s video, I
adhered the Whisper White layers to the Red Glimmer layers using
Tombow, and then laid them under my self-healing mat while I continued
working
on the other parts. 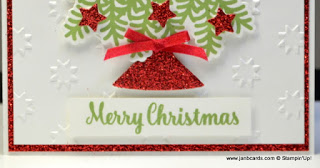 Tombow is great for adhering to the Glimmer Paper
but it does need some pressure and some time to get a good grip!

I
took another piece of Whisper White CS, and stamped the Christmas tree
from the Ready for Christmas Stamp Set using Wild Wasabi Ink. 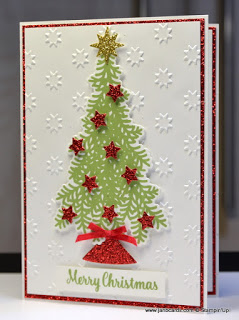 I used the Christmas
tree die from the Christmas Staircase Thinlits Dies to cut the tree
out, and I also used the star die to die cut nine Red Glimmer stars.

For the star on
top of the tree, I used Gold Glimmer Paper and cut one small and one medium star from the Starlight Thinlits Dies.

As
I was preparing all these pieces I was thinking about the base of the
tree, and how was I going to finish it off!

In my mind it was an indoor
tree – real or artificial? It didn’t matter! – so I needed a tub to put the tree in!

I
decided to go through my file of dies to see what I could use, and as usual there were several options! 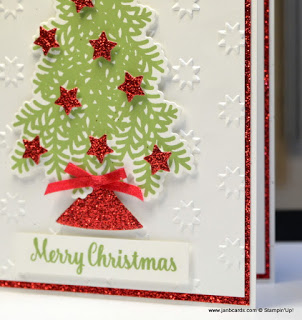 There
were a few possibilities, but as soon as I saw the Up and Away Thinlits
Dies, I knew I had to use the “funnel” die upside down.

I feel it takes
my tree from ordinary to something a bit special!

I finished the front
of the card with the sentiment from the Star of Light Stamp Set, stamped
in Wild Wasabi, and I topped the tree with the larger Gold Glimmer
star.

I die cut one more small and one more medium stars, and adhered them at the bottom of the Whisper White layer inside the card! 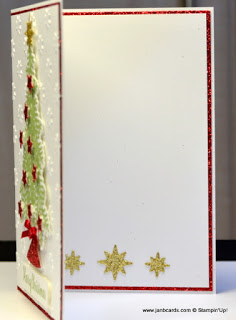 Another
of my highs yesterday was that my two-hour video was very well received
by my YouTube subscribers.

I’ll certainly consider doing it again, the only
real change I’d make is that I’d plan doing it from the beginning
rather than tumbling into the idea like I did this time!

Footnote: when I arrived
back home yesterday, after church, hubby downloaded the film from my dash cam to view the
near-miss I’d had on the way to church earlier!

The film showed what happened, very clearly, including the number plate on the other car! 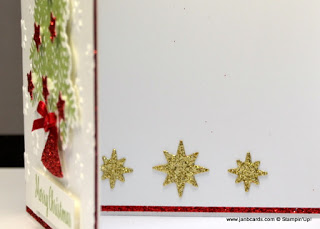 If all cars were fitted with dash cams, it wouldn’t take the police long to work out what happened in the horrific six-vehicle smash in the early hours of yesterday morning, in Birmingham, which claimed six lives!

They’re not
very expensive, and I think like SatNav, it’s only a question of time
before everyone has one! If it’s too late to put on your Christmas
wishlist, treat yourself!

That’s it from me today. Until tomorrow, happy crafting!

PS Stampin’ Up! have put more items in the Clearance Rack! Some of the retiring products have been reduced by 70%! Do pop over to my shop www.janbcards.stampinup.net to grab a bargain or two. But don’t delay, once they’ve gone, they’ve gone for good! ☺