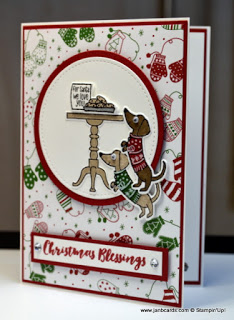 This is my first play with the Ready for
Christmas Stamp Set, and the co-ordinating Christmas Staircase Framelits
Dies.

I’ve seen cards made with this set where the dog has his paws up
on the table, so he can eye the cookies that have been put out for
Santa.

The only way I could think of adding to this was to have one dog
standing on the other dog’s back! 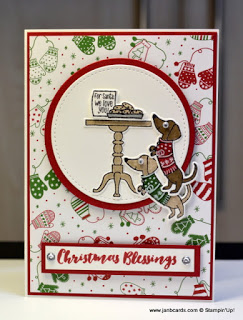 I’ve
been wanting to use the Cherry Cobbler and Garden Green Be Merry
Designer Series Paper (DSP), particularly the design with the
mittens, so I chose that as my starting point for today’s card!

I
started with a card base in Whisper White Cardstock (CS), with a layer
of Cherry Cobbler CS and a top layer of the mitten design from the Be
Merry DSP.

Using
Whisper White CS and Basic Black Archival Ink, I stamped the table, the
cookies, and two dogs from the Ready for Christmas Stamp Set.

Using
Marker Pens, I coloured the table, the cookies and one dog using Crumb
Cake – I’ve named him Clover! – and Smokey Slate for the plate the cookies were on.

I went over
this using my Wink Of Stella Clear Glitter pen to give the illusion it
was a silver platter!

I coloured the second dog in Soft Suede, and her
sweater in Cherry Cobbler – I’ve named her Scarlet! ☺

I used Garden Green for the Clover’s sweater. 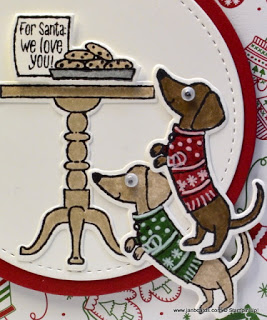 I had wanted to leave the stripes white but I was a bit clumsy,
and ended up colouring the whole sweaters.

To break the colour up a bit,
I used my white gel pen to paint the stripes back in, add the dots, the
stars and highlight the lower cuff. 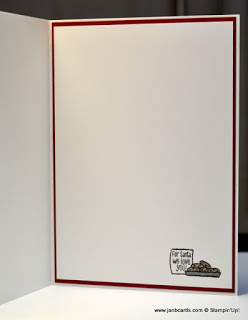 I
started to adhere all the elements together, and for the main focal
image I die cut a Whisper White CS circle using the largest Stitched
Shapes Circle Famelits Die.

This was mounted onto a larger circle which
had been die cut from Cherry Cobbler CS, using the Layering Circle
Framelits Dies.

I adhered the two pieces together using Tombow, and then
adhered it to the card front using Dimensionals.

I
adhered the table using Tombow, and I placed the feet on the table
right at the bottom of the white circle.

Using Dimensionals, I added the
silver platter of cookies. 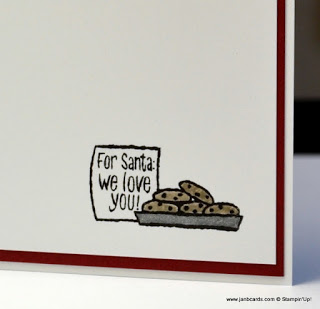 To position Clover,  I put one large Dimensional under his tummy and a slither under his tail.

I put his paws so they were
resting on one of the feet of the table, with his back positioned for Scarlet to stand on!

I
used a Glue Dot to adhere Clover’s head in place.

To fix the Scarlet in place, I used Tombow as far down her back to the end of her
sweater and then added a slither of a Dimensional under her tail.

I put
her standing on Clover’s back with her front paws
resting on his head! 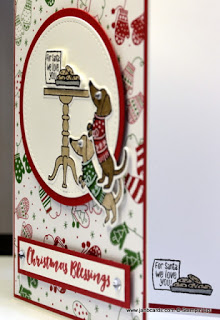 Using
Dimensionals, I adhered the sentiment in place.

Inside the card I added
a layer of Cherry Cobbler CS, and a top layer of Whisper White CS.

In
the bottom left hand corner, I stamped another plate of cookies and
coloured them in the same way I did for the front of the card.

I added googly eyes to Clover and Scarlet, and they’ve worked better than I imagined they would! 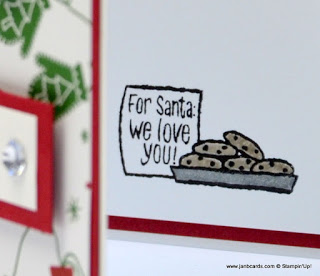 I hope you have a lovely day, and until tomorrow, happy crafting.