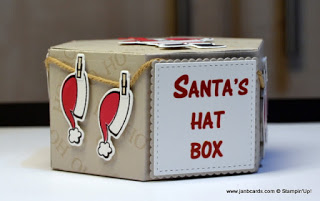 I
hope you’ve enjoyed your weekend. I’m starting the week with a touch of  silly
humour!

Yesterday, I didn’t have a clue what stamp set to use to make today’s card
with. 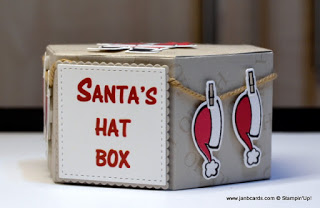 Having seen quite a few great cards that crafters have made using
Santa’s Suit, I thought I’d give it a go, but my mind was a blank! 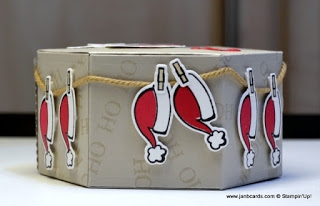 It worked and I thought I’d make a
window box and put the washing line around the outside and hang the
washing on it.

I
die cut two parts of the Window Box using Sahara Sand Cardstock (CS),
and then stamped HO HO HO from the Oh, What Fun Stamp Set, randomly over
both pieces, tone on tone. 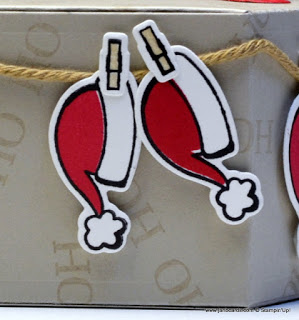 Then I assembled the boxes as per the
instructions.

This is a two step stamp set and I
really struggled to get the hats stamped in red completely. On nearly
every hat, I had to stamp the colour twice to get the job done
properly. It
was when I was fixing the washing line to the box that the idea of a
hat box came to my mind!

I collected all the die cuts together,
excluding the hats, and the one “santa” I had assembled, and put them in
a little cup I had on my desk – ready for another project. 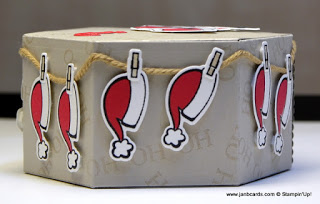 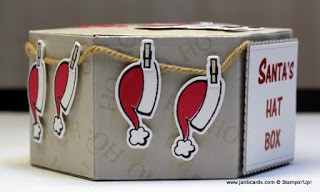 I stamped,
coloured and die cut seven more hats, and I also stamped, coloured and
die cut some pegs. I took some thick Baker’s Twine in Soft Suede – now retired – and adhered it with Tombow on each edge of the
hexagon-shaped box.

Yesterday
was one of those rare occasions when I useed my computer to help me
with a project, and printed the label Santa’s Hat Box! 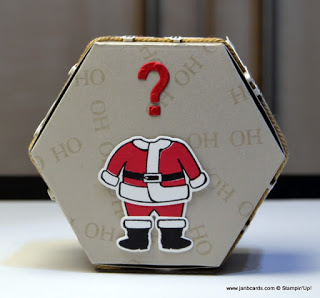 The label was die
cut with the Stitched Shapes Framelits Dies, square no. 2 die.

I
layered this onto a scalloped square from the Layering Square Framelits
Dies, and adhered it to the front of the box using Dimensionals so I
could hide the ends of the washing line! 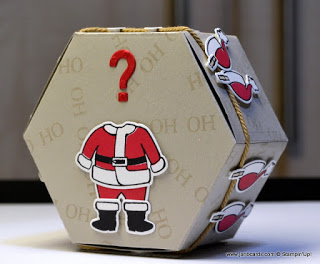 I
adhered the completed “Santa” to the lid of the box and left a gap where
his hat should be. I thought it looked a bit odd, so I added the
question mark as if to say “where’s the hat”!

While I’ve been sitting
here writing, I decided to add some Wink of Stella Clear Glitter to all
the white cuff areas. It makes such a difference. I’ll try and remember
to show a photograph with the glitter tomorrow!

Before
I go, I must tell you about two creations I saw on Pinterest
last night that gave me a giggle.

One of them was from the This Little
Piggy stamp Set, and featured the upright piggy with santa’s boots and hat but
minus the flower! It was so comical! 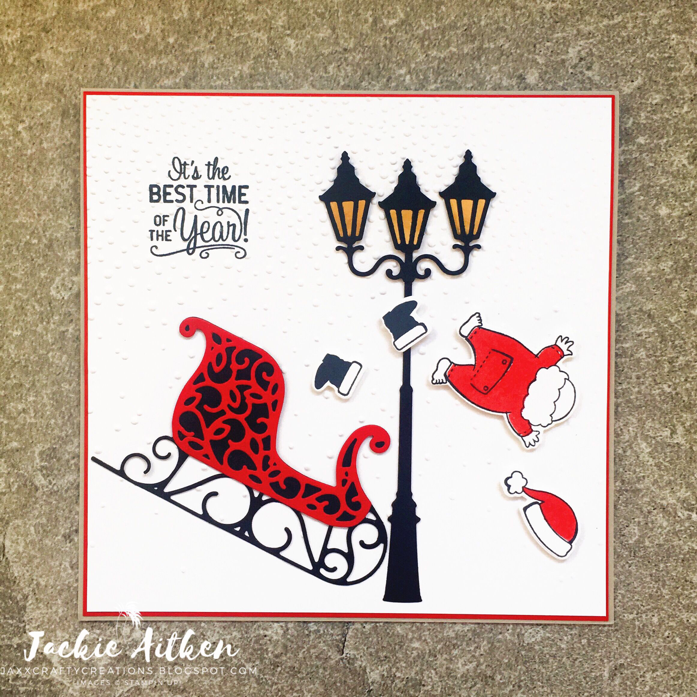 The very best one had a die cut sleigh from the
Santa’s Sleigh and co-ordinating Santa’s Sleigh Thinlits Dies, which had
crashed into a lamppost from the Brightly Lit Christmas Stamp Set and co-ordinating Christmas Lamppost Thinlits Dies, and sent Santa flying
through the air closely followed by his boots, and his hat leading the way! I thought it was absolutely hilarious!

I’ve managed to do a copy and paste, so see the card above. It was created by Jackie Aitken – jaxxcraftycreations.blogspot.com.
(If you see this post Jackie – congratulations, your creation is absolutely fabulous!)