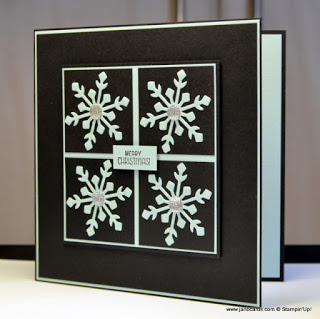 I
saw a card on Pinterest I wanted to CASE but I knew I needed to start
with a larger than normal card base.

I’m really pleased with how it has turned out, and the only thing
I’d change if I did it again is I’d use Night of Navy CS instead of Basic
Black CS for my card base colour! 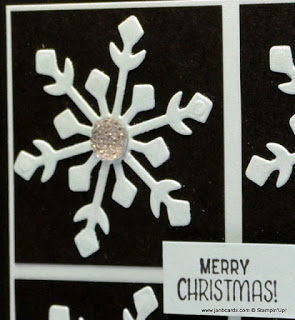 I
started today’s card with a piece of Basic Black Cardstock (CS) which
measured 12″ x 6″ scored and folded at 6″.

I added a layer of Soft Sky
CS, and then a top layer of Basic Black CS.

Inside the card, I adhered a
layer of Soft Sky CS so there’s somewhere to write the greeting. 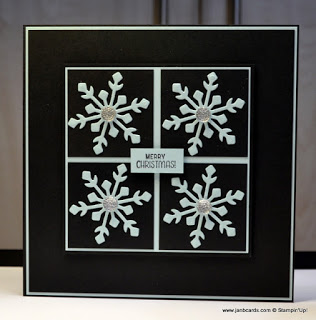 The
original idea for my card was to do the centre square as shown but to
adhere it as a diamond rather than a square, but when I came to it I thought the square looked better.

The first black squares I
cut for the snowflakes to sit on were 2″ square, but I felt there was
too much spare cardstock around the snowflakes.

Then I took a piece of
Soft Sky CS, and tested it for size by laying the four squares in place.

Again it was a bit too big, so I trimmed it down on two sides making
sure I kept it as a square.

I cut a slightly larger piece of Basic Black
CS to ahere to the card. 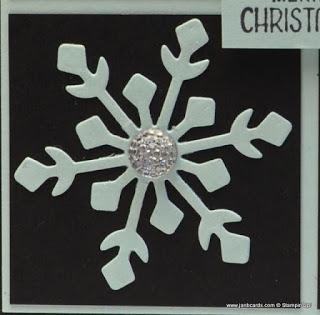 This layer can’t be seen in the photograph, but in
can be in real life, and it helps to give the square a finished look!

I started to put the squares together by adhering
the 1 7/8″ black squares in the corners o the Soft Sky CS square.

I
misjudged the first square, and found I had quite a large gap on the two
edges that were parallel to the two neighbouring squares.

The resulting
cross is more or less even so I’m happy with how it turned out. 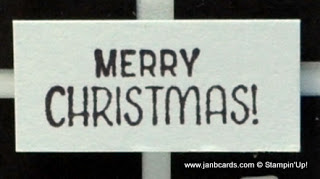 Then
it was time to start experimenting with snowflakes to decide which ones I wanted to use!

I knew I wanted something quite plain, so I chose the large plain snowflake
in the Trim Your Stockings Thinlits Dies. 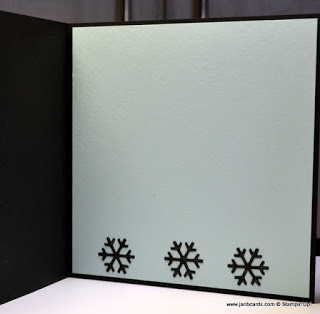 I
adhered them onto the black squares, making sure they were all facing
in exactly the same directionway!

The more I worked with this card, the more I liked
it!

The only part I thought was going to be a challenge was the
sentiment.

My first thought was to have a circle in the centre of the four
squares but thought it may be too big, and it would therefore detract from the snowflakes.

It was time for me to get my stamp set folder out to see what options I had!

I settled on the very
small Merry Christmas sentiment in the Seasonal Chums Stamp Set which I thought would be ideal, because it 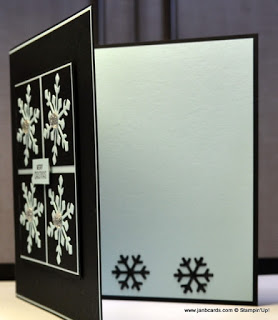 was small and neat, and wouldn’t detract from the overall
design.

Using Dimensionals, I adhered the snowflake layer to the card front, and then I used more to adhere the sentiment in the centre.

I wasn’t sure whether to punch some black circles for the
centres of the snowflakes or not, so I decided to have a look through my
DVD box where I keep all my Basic Pearls and basic Rhinestons.

As soon as I saw the Faceted Gems, I knew they’d be ideal because they come in three great sizes – I used the largest size!

To
decorate the Soft Sky layer inside the card I die cut three snowflakes
using a die from the Seasonal Tags Framelits in Basic Black CS, painted
them with my Wink of Stella pen. 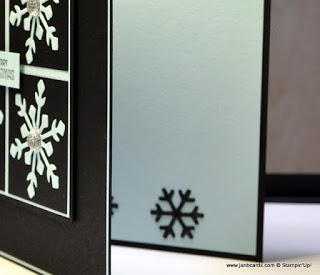 I adhered then along the bottom row
using Tombow.

Today
I have a delightfully busy day ahead of me.

As well as making tomorrow’s video, I’ll
be making a start on getting all the new Sping/Summer and Sale-a-bration
catalogues ready to post, hopefully, on Saturday so they get delivered
immediately after Christmas.

I hope you have a great day, and until tomorrow, happy crafting.