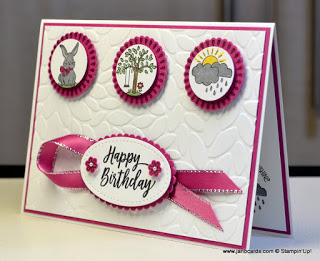 My
Stampin’ Up! delivery yesterday included the two new scalloped circle
punches, and I wanted to play with them straight away!

They co-ordinate
with the Good Day Stamp Set brilliantly so it was easy to decide what I was going to base today’s card on!

After a lot of fun stamping and punching images, using different inks, and different cardstocks, I knew which
direction I wanted to go in.

The scalloped circles produced by these
punches are 1 1/8″ and 1 3/8″, and a lot of the images in the Good Day Stamp Set
can be punched out with a 1″ Circle Punch.

When these stamped images are layered on to
the larger scalloped circles, they leave a good 3/8″ scalloped edge visible. 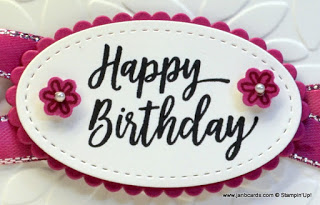 I’m really taken with the border on the Just Because Stamp, because it’s something different, and with the
inner circle being just 1″, it will take one of the little
images.

I
stamped three Just Because stamps using Basic Black Archival Ink, on
Berry Burst Cardstock (CS), and rather foolishly punched them out before colouring them! 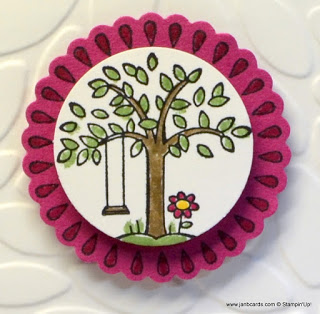 It made painting the little “raindrops” that were decorating the outside rim, that more difficult, but I persevered with my Berry Burst Marker Pen.

Normally I would have gone for my white gel pen,
but I do try to be unpredictable, and I do think on this occasion it was a good decision to bypass it in favour of my Marker Pen!

Using Whisper White
CS, and Basic Black Archival Ink, I stamped the rabbit, the tree with
the swing and the sunshine stamp.

Using my Marker Pens, I coloured the images, and then
punched them out using the 1″ Circle Punch. 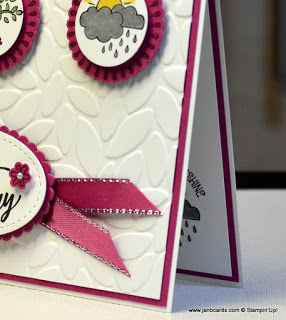 The first two fitted in
the punch beautifully, but the last one had a sentiment going in a half circle over
the top of the image, rather like a rainbow; I was careful as I did it and succeeded!

Next I added Dimensionals to the three Berry
Burst Scalloped Circles, and then adhered the three images to them, again using Dimensionals. 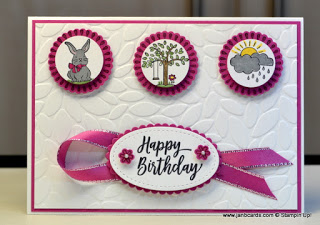 Finally, I adhered them in a horizontal line across the top of the card.

I
chose the Happy Birthday sentiment from the Sorthern Serenade Stamp
Set, and stamped it on a piece of Whisper White CS, using Basic Black
Archival Ink.

I used one of the the Stitched Shapes Oval Framelits dies
to die cut the sentiment, and adhered it to a scalloped oval in Berry Burst
CS which I’d die cut using the Layering Oval Framelits Dies. 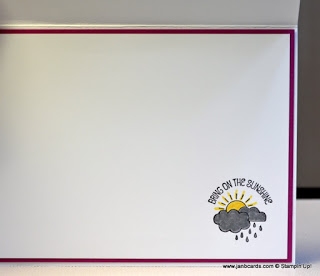 I folded a
piece of the Berry Burst Metallic Ribbon like a breast cancer ribbon, and put a Glue Dot where the two pieces crossed over each other, and then I added some Tombow, to make sure the ribbon didn’t go walkabouts.

Using Berry Burst Ink, I
stamped two little flowers from the Sprinkles of Life Stamp Set onto a scrap of Berry Burst CS, and punched
them out using the Tree Builder Punch. 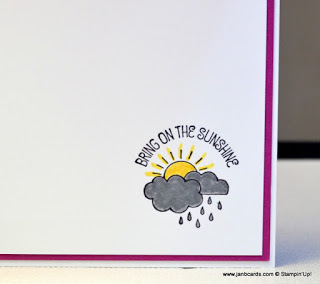 Using more Dimensionals, I
adhered them onto the sentiment oval, and added a Basic Pearl to the
centre of each.

To
complete the card, I stamped the Bring on the Sunshne image on the
Whisper White CS layer inside the card using Basic Black Archival Ink.

I
coloured  the image in the same way I did on the front of the card. The only question mark I have over this card is, should I have cut the
ribbon both ends instead of having a loop at one end?

I think it would
look better, but if I try it and I’m wrong, I’m snookered! What do you
think?