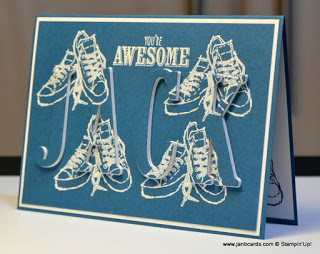 Hubby
didn’t have any success with the towels in Marks & Spencers today.
We’ll have our last try in M&S in Croydon on Friday, before we go up
to London to see Cirque de Soleil.

One of the Christmas cards I made was
an eclipse card, made by supporting the letters with Dimensionals. 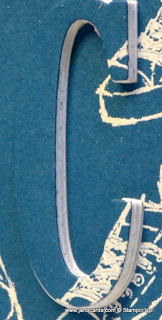 Since then I’ve had it in mind to try the alternative method which is
die-cutting several layers of each letter, and adhering them together
using Tombow, which is what I’ve done for today’s card.

Personally, I prefer this method because I think it looks tidier, and more solid.

I
started my card using a Dapper Denim Cardstock (CS) base, with a middle
layer of Whisper White CS, and a top layer of Dapper Denim CS.

Using my
Embossing Buddy, I wiped over the front of the top layer, and stamped
the sneakers, from the Sale-a-bration stamp set called Epic
Celebrations, in Versamark.

Then I stamped the You’re Awesome sentiment, which is from the same stamp set,
at the top of the layer, again using Versamark.

Next I dipped the entire layer
in my White Embossing Powder box, and gently tapped off the excess, before I heat
set it using my Heat Tool.

I used my white gel pen to colour the
laces.

Using
our Large LettersFramelit Dies, and our Thick A4 Whisper White CS, I
die  cut four of each letter.

I held the four layers together to measure
the thickness, and it was approximately 1/16″ which is the depth of Dimensionals.

I die cut another four of each letter, which I knew would
be the depth of the Adhesive Foam Strips i.e. 1/8″. 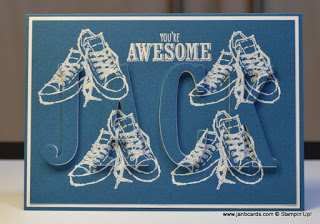 Although it took a
little while to do it, it was very relaxing adhering all the layers
together.

I went back to the top Dapper Denim layer, and with the aid of
my ruler and a pencil, I marked off where I needed to cut the letters
out – hopefully in a straight line! LOL! 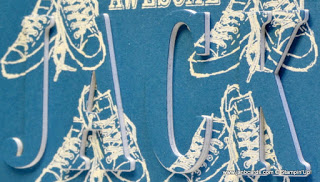 Once I’d die cut the letters, I adhered the top layer to the card base, making
sure I paid attention to the small pieces that protrude up or
down on the negative part of each letter, not only making sure I glued them down, but that I also glued them
pointing in the correct position.

The next step was to get the centre
of the top half of the letter A in place.

I did this by laying the
Dapper Denim die cut A in the negative space on the top of the card
base, and adding some Tombow to the blue triangle piece, and popping it
into place.

I removed the letter A and glued it on the front of the 1/8″
thick Whisper White letter A, and then glued it into the negative space on the card front. 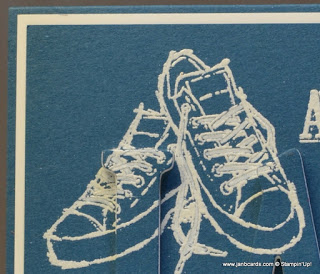 I repeated this last stage with the remaining three letters, which was really easy, and very straightforward as they just slipped into the negative space.

I
decorated the inside of the card by adding a layer of Whisper White
CS, and I stamped a pair of the sneakers using Dapper Denim Ink.

I think
this makes a really great masculine card for any age – don’t you agree? 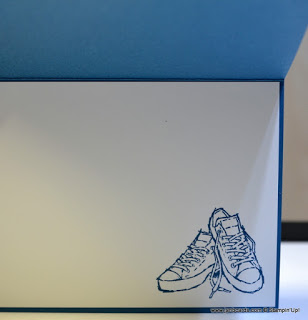 You
may remember earlier in the month, I told you about the Free Prize Draw
I’m running as my way of saying THANK YOU to everyone who supports me, one way or another, in my Stampin’ Up! business. 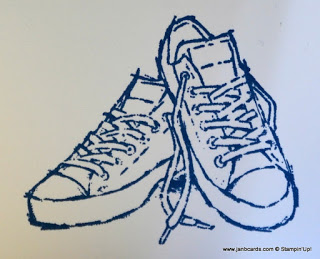 At the time I made this announcement, I also said I was
working on something I could do for all my supporters around the world who aren’t allowed to
shop with me because of Stampin Up! rules.

I’m now pleased to announce the details of my special Thank You
Promotion that’s open to everyone outside the Stampin’ Up! European market i.e. the UK,
the Netherlands, Austria, Germany, and France.
The prize will be a box of my hand made greeting cards, plus something typically English!

To be in with a
chance to win, all you need to do is to leave a comment on my blog
between 15th – 29th January 2018, and all names will go into a hat to
find one lucky winner.

Full details of both parts of this promotion can be seen on the NEW Promotions page. Please let me know if you have any questions.