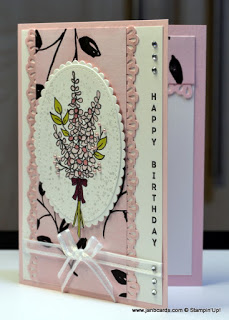 Today’s card is another one of those like Topsy in Uncle Tom’s Cabin; it just grew!

For today’s card I
knew I wanted to use the Lots of Lavender Stamp Set, which is one of the
gifts available in the new Sale-a-bration Catalogue, and I felt like doing some colouring! 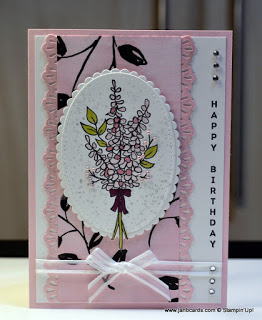 As I was going to use my Stampin’ Blends, which are our alcohol-based ink pens, for colouring, I used Tuxedo Black Memento Ink, and stamped the bouquet image onto a piece of Whisper White Cardstock (CS)

Using a piece of a Post It Note, I made a mask for the bouquet, so I could stamp over the background.
I used Smokey Slate Ink, stamped off once, and the splash stamp from the new Waterfront Stamp Set (page 48).

As
I was colouring, I decided to try a technique I saw a few years ago but
have never tried! 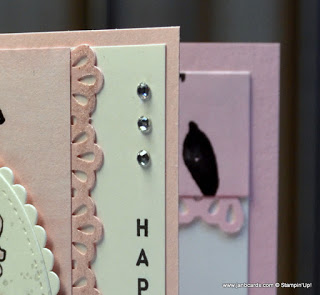 I don’t know what the name for the technique is,
but it’s where you have part of the image coming outside the die-cut
shaped image – see the stem.

This isn’t a particularly good example for
this technique, but it’s an excellent design to have a first go on,
because I knew I could cut the stems off if it didn’t work out!

I
couldn’t find any Designer Series Paper (DSP) in Pink Piroutte so I
chose one of the designs from the black and white designs in the Petal Passion DSP.

I coloured the entire sheet using my Stampin’ Blend in Dark Pink Pirouette.

As
I was painting, the design on the reverse side of the DSP became very
visible, to the extent I started thinking maybe I was creating a new
design with the reverse design manifesting itself as grey!

I was very relieved as I saw it slowly fading
as it was drying!

Once my card was finished, I realised I should have chosen one of the designs which had smaller images.

I
decided to have the DSP as a slim panel, rather than a full layer, because I wanted to use the happy birthday sentiment from the Vertical Sentiments Stamp Set.

I rounded the ends of the ribbon strips the same way I showed in video No.341 – Gift Card Holder.

Using Tombow, I adhered one strip on each side of the DSP panel. 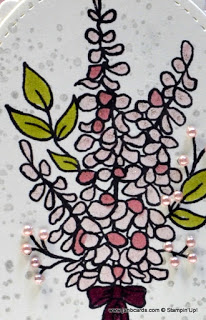 I
painted the ribbon borders with my Wink of Stella Clear Glitter Pen, but it would have been much easier to paint them before adhering them to the DSP strip! LOL!

Using Tuxedo Black Memento Ink, I stamped the sentiment on the right hand-side of the Whisper White CS layer.

Next I adhered the DSP strip on the left-hand side, leaving a gap of approximately 1/4″.

Before I adhered the layers together on the front of the Pink Pirouette
card base, I tied some of the new 1/4″ Whisper White Organza Ribbon around
the lower ppart of the card front, and tied it into a bow.

Next I painted the
flowers, leaves and stems using my Wink of Stella Clear Glitter Pen. 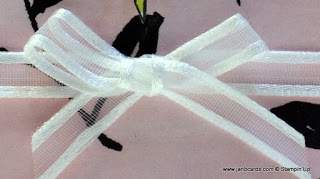 As I
was adding some sparkle, I also added three Basic Rhinestones above and
below the birthday sentiment.

I still have a lot of the really small
pearls from the old style Basic Pearls, I added one to each of the black
bobble flowers in the bouquet! 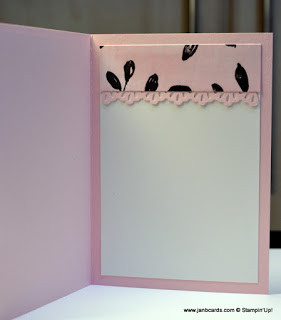 To
decorate the inside of the card, I took a strip of the painted DSP and
added some more punched ribbon.

I also adhered a layer of Whisper White
CS, so there was a space for a message.

As I went to adhere it inside the card, I was holding it upside down
which was a really happy mistake because I think it looks so much nicer at the top, like a real curtain!

That’s it from me today. I hope you have a lovely, relaxing weekend. Until tomorrow, happy crafting.