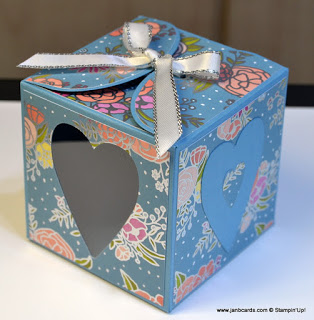 This
morning I uploaded my video that shows how to make this 3″x3″x3″ cube box using the
Lots to Love Box Framelits Dies.

When Stampin’ Up! introduce a new
product like the Lots to Love Box, it doesn’t take long before a demonstrator comes out with an idea how to get more out of our dies,and this one is
no exception!

I don’t know who came out with the first Lots to Love Box,
but the first time I saw the idea was at team training a couple of
weeks ago. 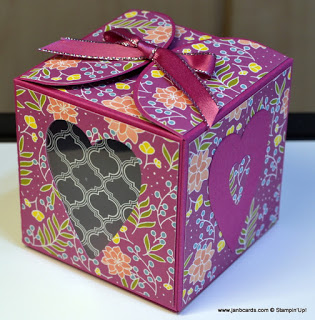 Natalie gave us a box as a 3D project for our afternoon of
crafting!

I saved mine to make after I was back home, because the box
inspired some ideas for me.

The first box I made was the Blushing Bride and Very Vanilla Bundle of Love
Specialty Designer Series Paper (DSP) Box.

I adjusted the score line,
added a window and worked out how to cut DSP to cover the lids. 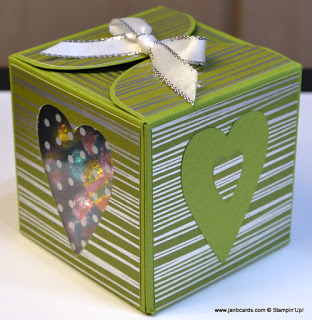 With the first box I
made a mistake with by punching the holes for the ribbons in the flap on
the window panel and the flap on the back panel.

The result was that my
bow was going sideways, not a good look!

While I was waiting for my video to download, I
had a look at my box to see if I could do anything to remedy my
problem!

I took one of my small retired punches and punched four hearts using Blushing Bride CS,
and adhered one heart to cover the holes on the DSP, and another underneath on the cardstock side! 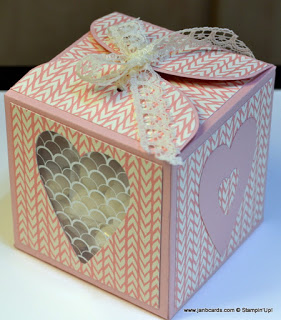 The idea
worked well, but I probably won’t need to remember this because I think
this is the kind of mistake you only make once – fingers crossed!

It
was easy to work out how to make the window, and I did it in such away
that the acetate panel is adhered between the DSP and the cardstock
layer.

When I used the Fabulous Foil Desiner Acetate, I forgot to remove
the protective sheet that covers the silver side! DOH!

As long as I don’t
tell anyone, I don’t think it’ll be noticed! LOL!! 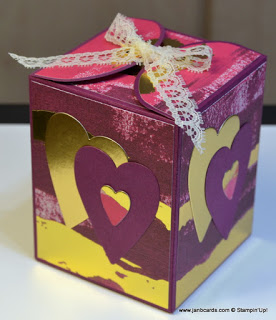 Once
I’d made myself a template for cutting the DSP layer for the flaps, I
made another three boxes and the template worked a dream everytime!

I’ve
now filed the two templates – the second template shows me where to
punch the holes for the ribbons so they’re in a straight line – inside the plastic wallet with the
dies!

I
understand making the template isn’t everybody’s idea of fun, but it
really is well worth the effort – I can’t recommend it enough.

I’ve
thoroughly enjoyed working on this project, and really hope you’ll
watch the video, and have a go at making these boxes. 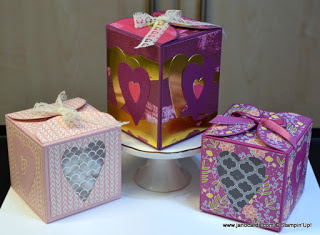 They’ll be
great for Valentine’s Day or Easter, and can be used for other gifts, not just sweets and chocolate.

When I made Natalie’s box, which is
3″x3″x3 7/8″, I found it was the perfect size to fit a Terry’s
Chocolate Orange in – including the box!

It could have been made with that in mind!

I found
this out because I happened to have two of them on my desk! 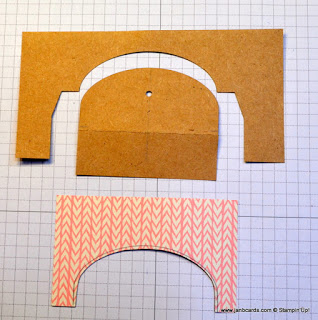 I’d bought
them for hubby because they are one of his favourites, but I wasn’t going to give them to him until I’d designed a box for them to fit in (individually)!