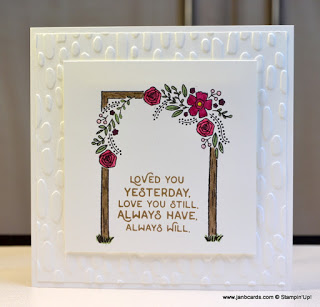 Yesterday
I had a very interesting play with the Love You Still Stamp Set!

When I
first saw this stamp set, I didn’t realise it was a two-step stamp set: I just thought the image would be great for colouring.

I decided to
use this stamp set yesterday with the sole intention of
colouring only, which I did and thoroughly enjoyed, but there was
something nagging me.

I decided to stamp the image again, but to colour
it using the two-step stamps this time – all ten of them! I used exactly
the same colours so that the images could be compared like for like.

My
conclusion is that I probably will always colour this image manually,
largely because I feel there are ten opportunities to make a mistake
with the two step stamping. 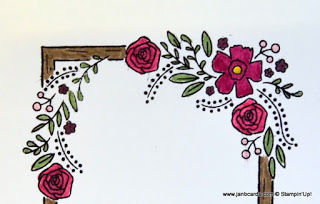 The
last two photographs show the two-step image on the left and the manual
on the right. The first photograph of the two, shows exactly what the
two-step image was like once I’d finished. 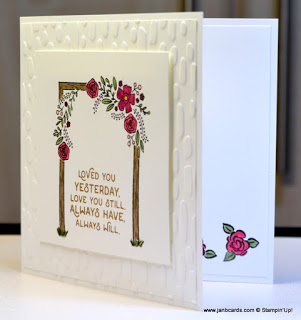 The second photograph
shows the same image after I’d coloured in the missing areas on the large
flower, and painted the bobble flowers with my Pink Pirouette Marker Pen.

Overall,
there isn’t a huge difference between the two, although the wooden
posts on the two-step image looks very much better than the manual
posts.

I mis-judged the largest flower big time and finished up with some
large white areas. I was disappointed that the centre of this large
flower was stamped in Fresh Fig at the same time as the four small
flowers. 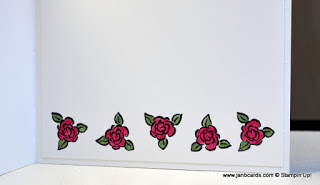 Going
forward, I think next time I use this stamp set, I’ll paint the posts
as two-step and the flowers and leaves manually; that way I’ll get the best of both worlds! 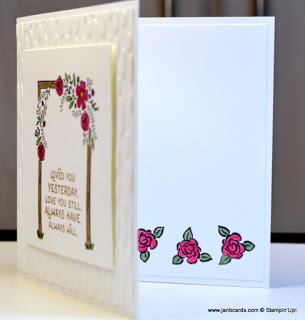 I used the manual image
to create today’s card, and made it a 5″ x 5″ card, because I stamped the sentiment inside the image, and I didn’t want to add anything else.

The Love You
Still sentiment I used is almost the same as my favourite romantic
sentiment, which is “I love you more today than I did yesterday, but not
as much as I will tomorrow”!

My card will make a lovely St Valentine’s
day card, although I’d like to finish it off by stamping above the
sentiment  “Happy Valentine’s Day”. 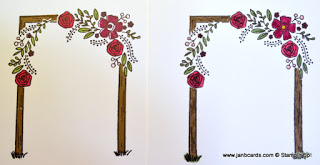 Finally,
do you recognise the embossing folder I used for the layer beneath the image? It’s called
Sweetheart, and is the one with the plain heart in middle of the
folder, so you can stamp in there!

I adhered the top layer onto the
embossed layer, using four horizontal strips of Dimensional edges. I did
this to make sure the centre of the card doesn’t dip, and show signs of a
flat area in the centre! 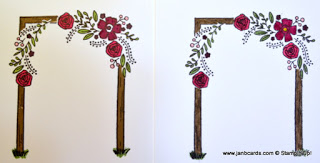 I
haven’t decided what I’ll do  with the two-step image, but if I come up
with an idea that’s very different from today, I’ll share it with you.