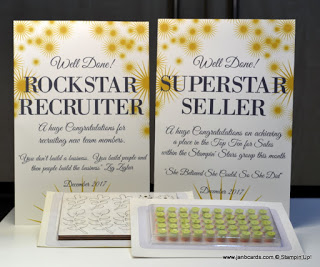 I
hope you’ve enjoyed a lovely weekend. Yesterday I went to Natalie’s Team
Training with one of thelocal ladies in my team, Amanda. This was the first training of 2018, and was held in a new venue –
the Loft, which is a large room in the Hawth Theatre. Apparently it’s
not far from the school we used to meet in.

The new venue is a lovely size to hold all twenty-eight of us, and there was a lovely atmosphere about the place. This is going to be our permanent new home!

As
everyone was arriving, deciding where they were going to sit, chatting,
catching up, etc., Natalie was handing out pink envelopes to some
people including me. I put it on top of my bits, and didn’t think to
open it until I arrived home, such was the lovely atmosphere in the room.

I opened my pink envelope when I arrived home, and I found two
congratulations certificates – one for being in the top ten for sales,
and the other one for recruiting new team members – both of these awards
refer to December 2017. I also received a packet of the self adhesive
sequins, and a packet of wooden embellishments called Touches of
Nature Elements. 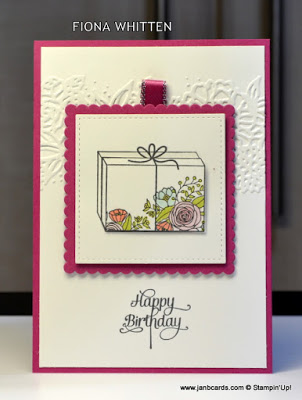 This is my favourite swap that I received yesterday,  and was made by Fiona Whitten.
Unfortunately my photographs don’t do Fiona’s card justice, but the 3D
effect with the parcel is amazing – it really does look like the parcel can be opened! The way Fiona achieved this is, she first stamped
the parcel from the Cake Soiree Stamp Set, and then stamped a second
image on another piece of Whisper White Cardstock (CS). After she had
coloured the second image, using Stampin’ Blends, she cut it out using
the line of the cord that goes up the left-hand side of the parcel and
through the middle, as the edge. 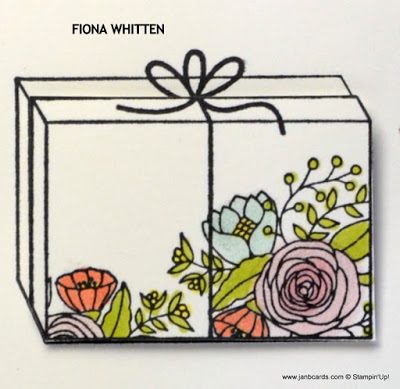 Next Fiona adhered it onto the complete image using
Dimentionals. Fiona used Berry Burst CS as the base for her card front. For the next layer, she used a
piece of Whisper White CS, and she dry-embossed a strip across
the top half using the flowery embossing folder in the Petal Pair
Embossing Folders. This is a pack of two narrow embossing folders which
measure approximately 2″ wide by 6.5″ long. The Whisper White CS with
the parcel on, was die cut using a square die from the Stitched Shapes
Framelits Dies. This was adhered, with dimensionals, onto a larger
scalloped Berry Burst CS square that had been die cut using the Layering
Squares Framelits Dies. Fiona atached a small piece of folded Berry
Burst 3/8″ Metallic-Edge Ribbon, and adhered the square to the card
front base, using Dimensionals. The final steps were to stamp the
sentiment, which is also fron the Cake Soiree Stamp set, and painting
the deoartion on the parcel using Wink of Stella Clear Glitter Pen.

That’s about it for today. Until tomorrow, happy crafting,