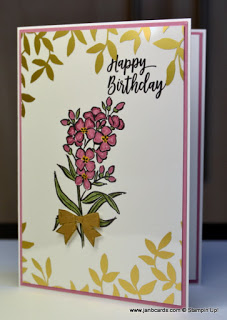 Yesterday I decided to make a card
using the Naturally Eclectic Card Overlays I received from my team leader, Natalie, as a small gift for being the top recruiter in the  team in December!

I’ve never used overlays
before, and I really wasn’t sure what to do with them! So I did the
sensible thing and went onto Pinterest for inspiration!

I only found about six cards,
which indicated to me that I wasn’t the only one who wasn’t sure what to
do them! 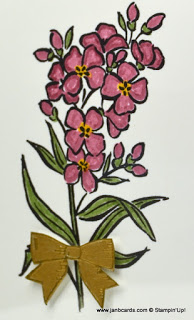 I’m not easily defeated, so I thought I’d have a go and see
where it takes me.

I’m not totally pleased with my finished card, but I recognise what’s not quite right, and what I could have done, which would
have made it better. However, as this was my first attempt, I’m not going to beat myself up about it; so let
me explain what I did!

The
pack of overlays come in a pack of twelve, that’s three different
designs, with two gold and two white overlays for each design.

I
decided to go with one of the gold designs first as I prefer the white, and felt that
if I was going to waste one, I’d rather waste gold! 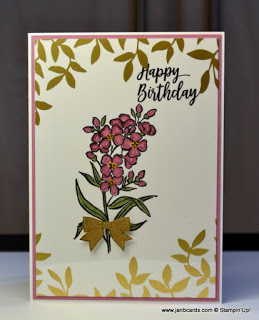 I
chose to use the bouquest of flowers in the Southern Serenade Stamp
Set, and stamped it in the centre of a Whisper White Cardstock (CS)
layer, using Basic Black Archival Ink.

I stamped the sentiment off to the right of the
flower, rather than directly above the bouquet as I didn’t want my card loooking as if I was building a tower!

I
took a card base of Whisper White CS, two Sweet Sugarplum layers – one
for inside and one for outside the card – and one more top Whisper White
CS layer for the inside.

I decorated this by heat embossing the “lace”
border stamp, as well as the single flower on a stem using Gold Embossing Powder.

The
Card Overlays come with protective sheets back and front, which is an
excellent idea! 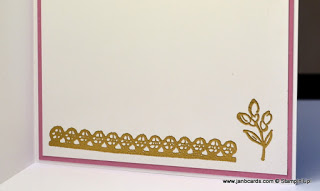 Leaving the protective sheets in place, I put  the
overlay onto the image layer and marked where I needed to trim it down.

I
cut these edges off, removed the protective sheet from the back of the
overlay, and put a tiny dot of Tombow on each leaf. 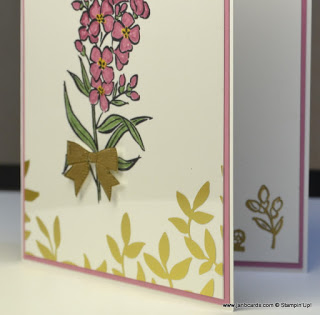 I dabbed the dots
that I felt were a bit too large with a piece of kitchen roll, and
adhered the overlay to the top layer.

I went back to my guillotine to cut off small
amounts that were coming over the edge.
Next I adhered this to the
cardbase.

I finished off with a gold heat embossed bow from the Holly
Berry Happiness Stamp Set, which I painted with a gold Sharpie pen and
then I fussy cut it. I adhered it to the overlay using Dimensionals.

Now I need to have another go at using overlays! If you’ve used overlays, and can offer me any hints or tips, please leave a comment in the box below! ☺☺☺