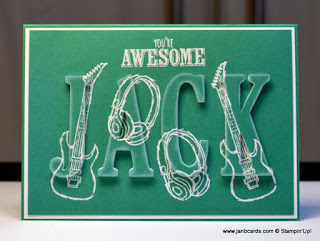 Registration went smoothly, and to
cut a long story short, I’m really thrilled that five ladies in my team
have all registered as well! 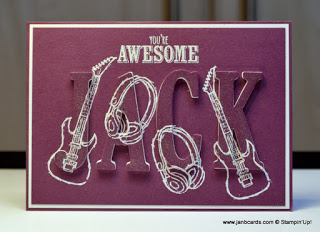 When
hubby and I arrived home from OnStage in Solihull last November, hubby
went online, and booked four rooms at the hotel next door to the railway
station for 6th – 7th April 2018!

At the time I thought I was being
overly optimistic, but I’m thrilled we’re using all four rooms!! 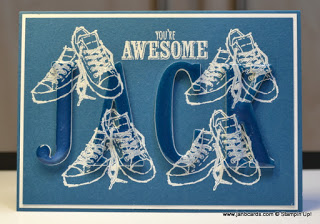 Needless to say,
because we had booked the rooms so early, we were given an excellent rate!

I’m so excited that I’ll be meeting three more of the ladies in my team – at the moment we’re online and telephone friends!

After a happily hectic day of phone calls, texts, private messages and emails, I
eventually managed to make today’s video! 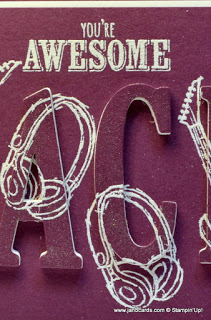 Very surprisingly, I only
did one take, and it really flowed!

As well as showing how to make an
eclipse card without using Dimensionals, I also wanted to experiment
with making the letters more visible.

I love the concept of eclipse
cards, but frequently the letters just cannot be seen.

Do you remember the card I made for hubby’s birthday last November – it looked as if I’d missed one letter off, and misspelt his name! LOL!

During the video , I wanted to
see if I could “highlight” the letters one way or another.

As always, I
made a card before starting videoing, and decided to highlight the
letters by sponging them using a Dauber and Whisper White Craft Ink.

I
did this on the Emerald Envy card and it’s definitely the one I like the
best.

I remember making a video three years ago- published on 15th March 2015 – that included
making some flowers from the Flower Shop Stamp Set and the co-ordinating
Pansy Punch.

The video is called No. 50 – Velvety Flowers, because that’s the effect the white sponging gave the flowers, and I think
it’s quite similar with the letters.

I
used Fresh Fig for the card in the video, and at the end I painted the
letters with my Clear Wink of Stella Glitter Pen.

As usual, the glitter
isn’t showing up very much in the photographs, but it is very prominent
in real life.

I’m not so happy with the effect of the glitter, but I
wonder if that’s because it doesn’t look right on a masculine card? I’m not sure. 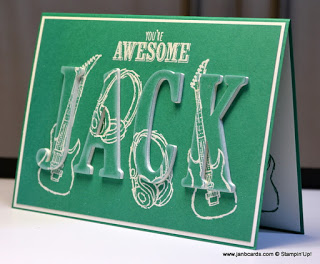 On
the Dapper Denim card I shared yesterday, I painted the letters with
our Fine Tip Glue Pen, and learned something really interesting about
this product.

Although I’ve never heard about this, I wonder if you
have?

I started on the last letter first – I tend to read magazines
starting at the back page too! LOL! – but I found the flow of the glue
became really slow by the time I reached the bottom of the right-hand
“leg”.

I couldn’t understand why this would be, but I had to leave it
for while as it was dinner time, so I replaced the lid and left it. 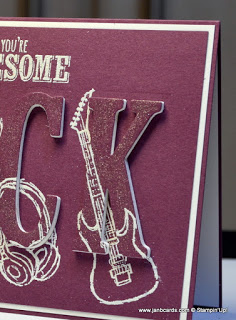 When I came back, and resumed painting
the letters with the glue pen, the flow of glue was back to normal!

I
thought it was strange, but I was happy!

After a while, the flow slowed down again, so I assumed it must be getting clogged.

I tried
clearing it with a pin, but it was too fat for the fine tip.

The only
thing to do was to put the lid back on, and hope the pin that’s in the lid would do the trick!

I tried again, and it worked
beautifully.

When it happened a third time, I immediately put the lid back on,
removed it virtually straight away, and the flow was back to normal.

Have
you ever experienced anything like this when using the Fine Tip Glue
Pen? 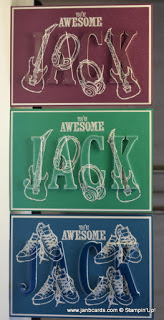 Out
of the three cards, my favourite if the Emerald Envy with Craft White
Ink sponging; second is Dapper Denim with the Fine Tip Glue Pen;  and finally it’s the Fresh Fig with the Clear Wink of Stella Glitter Pen. What’s
your favourite?

My
top priority for jobs to be done today is my accounts! I had a reminder
from my accountant yesterday telling me I only have fifteen days to
get my tax return in or face a fine – that’s good money I could be
spending on my craft products – so accounts it is! ☺ Until tomorrow, happy
crafting.