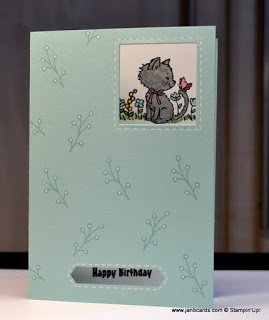 I’m
really pleased with today’s card, but if I’d known what the finished
card would look like, I would have done each part in a different order!

I knew when I started that I wanted to do a window for the image and
one for the sentiment, but I wasn’t sure what I was going to do about
the large expanse of plain cardstock between the two!

I thought about dry embossing but
that would interfere with the faux stitching, and the idea of  tone-on-tone stamping didn’t occur to me at this stage! 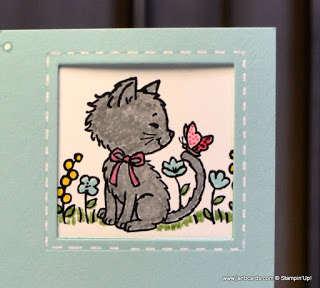 My
first decision was to have a Pool Party Cardstock (CS) card base, with a Whisper
White CS layer inside.

The only single layer cards I ever make are Thank
You cards, and although I thought about doing layers for this project, I just
didn’t feel it would be right.

I picked up my stamp set
reference file, so I could choose an image and a sentiment.

As I was going through my file, I selected seven different stamp sets that had an image I thought might work.

I took all seven stamp sets off the shelf, so I could
test the images with the square die, and so I could also test the image with the Classic Label Punch, which I was going to use for the sentiment window!

I rejected all the images, apart for this kitty because I liked that she has a “background” around her with
the grass, flowers, and butterfly. 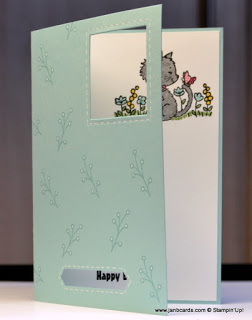 The best size square from the Layering Square  Framelit Die was the one that would show Kitty with some grass and flowers, but not everything.

I wanted the recipient to have the surprise of seeing a bigger
image once the card was opened.

After I’d punched the sentiment window using the Classic Label Punch, I decided on the Happy Birthday sentiment from the Party
Pandas.

I
started my card by die cutting the window in the card base, and then
I adhered the Whisper White CS layer inside. 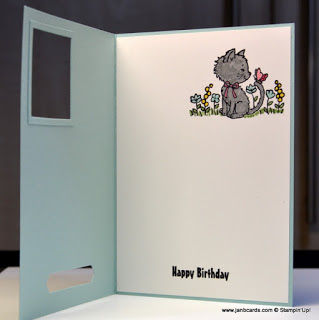 To find the correct position for the image, I closed the card and drew a
pencil line on all four sides of the window.

Then, with the aid of my Stamp-a-ma-jig, I stamped Kitty using Basic Black Archival Ink, and
coloured everything using a selection of Marker Pens.

Next, with the help of my Stamp-a-ma-jig again, I stamped the sentiment through the window.

Then I used a white gel
pen, and a ruler to draw faux stitches around both windows, but then I was stumped!

I needed something for the large expanse of plain cardstock between the two windows, so I went 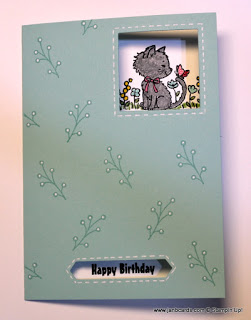 back to my stamp set reference file, thinking that maybe I could use a small
stamp tone on tone.

As soon as saw the branch with bobbles on it, from the new Cake Soiree Stamp Set, I knew that was it.

I’d use my White
Gel Pen to colour in the bobbles, and that would tie everything together
beautifully.

Next time I make this card, I’d do the tone on tone
stamping before cutting windows, so it looks like a planned all over
design, as opposed to an afterthought!

That’s it from me today. Until tmorrow, happy crafting. 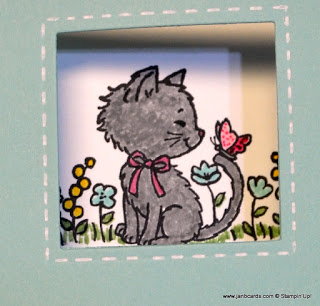