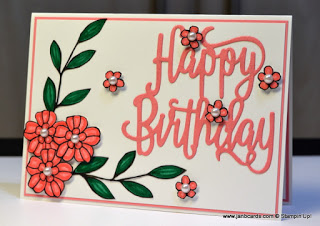 I
had a great time yesterday, getting myself up to date with everything
in my office, except for getting my accounts ready for my
accountant, which was the object of the exercise!

Never mind! As long as I work as well as I did yesterday, they’ll be ready
sometime in the afternoon! 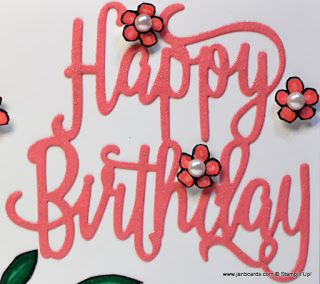 With
all the fabulous new stamp sets I have from the Spring/Summer
catalogue, I have no idea what made me pick up the Rose Wonder Stamp set
today!

But I’m glad I did because I found this card very relaxing to
make, with plenty of colouring as well as plenty of fussy cutting!

It’s
always at this time of the year that I concentrate on using the
cardstock I have in the five in-colours that’ll be retiring on 31st May
2018. 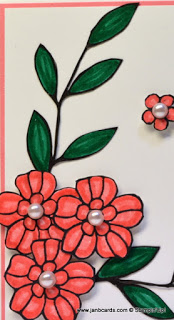 They are Emerald Envy, Flirty Flamingo, Peekaboo Peach, Sweet
Sugarplum and Dapper Denim. Not surprisingly, I’m already very low on my
favourite which is Sweet Sugarplum.

I’ll also be sorry to see Emerald
Envy go, but on the plus side, we’ll have five new in-colours to replace
these!

Originally,
I wanted to use the large rose and leaves stamp, but decided it was
just a bit too big.

I started to think about only using part of the
image, and eventually my thoughts settled on the small rose and small
branch which has a handful of leaves.

I chose to use a Whisper White
Cardstock (CS) card base, with a Flirty Flamingo CS layer and a top
layer of Whisper White CS. 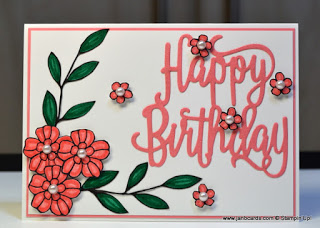 I coloured the leaves using Emerald Envy,
and Flirty Flamingo Marker Pens for the flowers.

I found it very relaxing fussy
cutting the three roses, but a bit of a challenge to fussy cut the
branches! 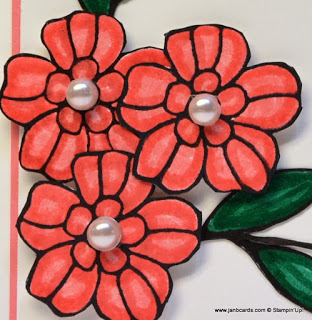 I decided to cut all the white cardstock off around the
leaves, but I left a slither of white along the actual branch.

My
reasoning was that I’d be able to go over all the white areas that were
visible, using my Basic Black Marker Pen.

This worked well and I found it
easy to twist the branches and leaves very gently so I could position
them exactly where I wanted them on my card. 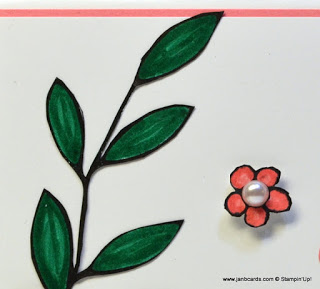 Using
Flirty Flamingo CS, and the Happy Birthday Thinlits Die, I cut out the
sentiment, and then painted it using my Clear Wink of Stella Glitter
Pen.

I arranged the elements onto the card base, and when I was happy, I
adhered the sentiment first using Tombow.

Next I adhered the two
branches using Tombow, and then the three small roses using Mini
Dimensionals.

Something
was missing! The sentiment looked wishy-washy next to the painted
elements, and I needed something to help balance it!

I stamped five more
small roses and decided to paint the inner tiny flower only. 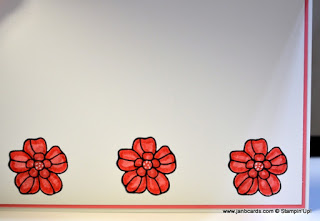 After I had fussy
cut them, I adhered them around the sentiment using Mini Dimesionals.

I
think it would have looked betted if I’d only used three of them, and tried removing one but it refused to budge, so I gave up  on that idea! 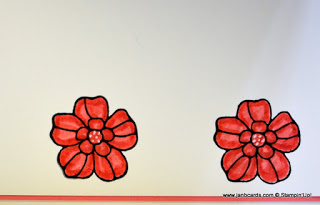 Inside
the card I adhered a layer of Flrty Flaming CS, and a top layer of Whisper
White CS. Using the Basic Black Archival Ink,  I stamped three small roses
and coloured them the same way I did the three on the card front.

The
final touch was to add some small dots on the inside of the flowers
inside the card and some Basic Pearls onto the flowers on the front of
the card! 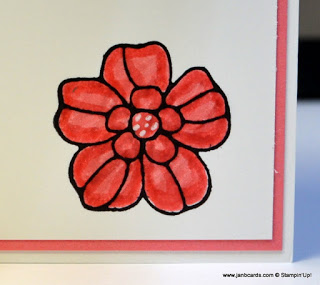 Apart
from thinking it would have been better to use three tiny flowers
instead of five, I’m quite pleased with my finished card!!