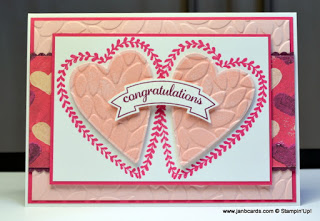 Today’s
card is another project we had at team training last weekend, but with
my spin on it.

I’m really pleased how this card turned out. 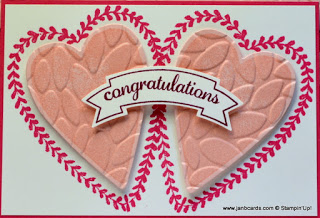 The object
of the three projects we were given,was to show that the Painted With Love
Suite wasn’t just for St. Valentine’s day, but to show that all the products sat just as comfortably as
wedding, anniversary and engagement cards, too!

I
started with a Whisper White Cardstock (CS) card base, with a layer of
Melon Mambo CS, with a top layer of Powder Pink CS.

Next I
took a 2 3/8″ strip of the larger heart design from the Painted With
Love Specialty Designer Series Paper (DSP), and added a Rich Razzleberry
trim – top and bottom – that I’d made using the Decorative Ribbon
Border Punch.

I adhered both pieces so the scalloped edge was facing
outwards on both sides, and then painted them with my Clear Wink of
Stella Glitter Pen.

Then I adhered this across the card horizontally, using Tombow.

Next
I took a layer of Melon Mambo CS, with a layer of Whisper White CS,
onto which I stamped two of the leaf heart designs from the Sure Do Love
You Stamp Set, using Melon Mambo Ink. 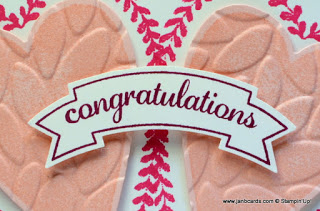 I adhered the Whisper White CS layer to the Melon Mambo CS layer, and then adhered it to the card front
using Dimensionals. 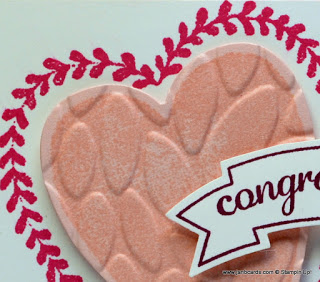 Next I ran the hearts through the Big Shot using the
Petal Burst Embossing Folder, and adhered them inside the stamped
hearts using Dimensionals.

To
create the banner, I started with a scrap of Whisper White CS, some
Rich Razzleberry Ink, and the banner stamp from the Thoughtful Banners
Stamp Set.

I chose the congratulations sentiment from the Best Birds
Stamp Set, and I curved the stamp round on my block so it would fit the
shape of the banner stamp.

It was a bit hit and miss but the way I did
it was to stamp an image of the banner on a scrap of paper, and put the
stamp on the block at what I thought look right. 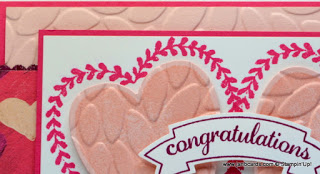 I put the stamp over
the banner image so I could see where it needed to be adjustedt, and kept going
until I was happy with it – one of the benefits of photopolymer stamps!

Next I
punched the banner out using the Duet Banner Punch, and adhered it
across both hearts using Dimensionals. 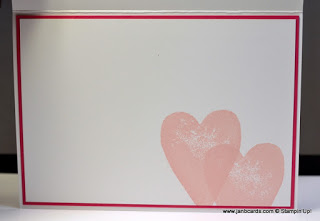 To
decorate the inside of the card I took a layer of Whisper White CS, and
stamped two of the large solid hearts, using Powder Pink Ink as before,
overlaying and offsetting them so they came off the sheet.

I adhered this
Whisper White CS layer onto a layer of Melon Mambo CS, and then adhered them inside the card. 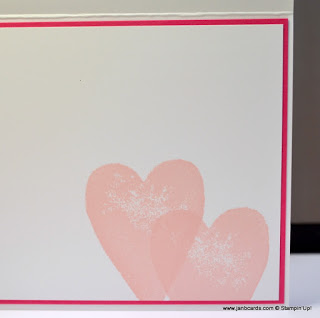 As I said before, I’m pleased how this card turned out!

Tomorrow I’m hoping to work on the third project which is a box!

Before
I go, I want to share a funny story with you about something that
happened at Church yesterday!

A man was giving his testimonial on how
and why he became a Christian. He said he went to Church with his new
girlfriend – now his wife and the mother of his children – and he was
surprised that the men in the congregation were “normal” men! 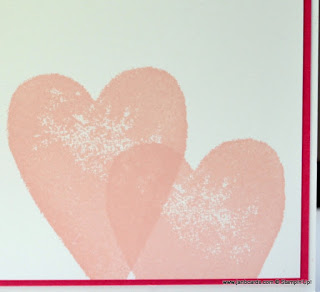 I’m not
sure what he was expecing, but as you can imagingine, it caused a ripple
of laughter through the Church!