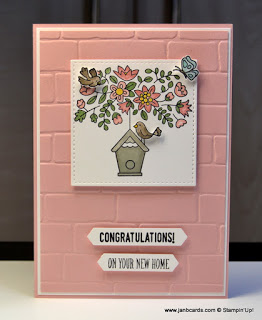 Today’s
card is the second idea I told you I had with the Flying Home Stamp Set, not so
much the design but I wanted to do a new home card!

I started with a
large piece of Whisper White Cardstock (CS), and stamped the birdhouse
image in such position that I could have cut the Whisper White CS large
enough to be a complete top layer to an A6 card, if that was what I
decided I wanted to do!

I used Basic Black Archival Ink for the image
and put it to one side to allow it a few minutes to dry. 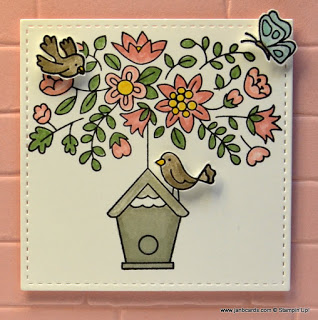 While I was
waiting, I decided to collect together a selection of my Marker Pens to
paint the image.

For the leaves I chose Wild Wasabi; for the house and
bird I chose Sahara Sand and Crumb Cake; Daffodil Delight for the
stamens; a selection of pinks, lavender and purple for the flowers.

After I’d coloured the leaves and the stamens, I tested the pinks,
lilacs and purples, by mixing and matching, and eventually settled for
Blushing Bride and Powder Pink. 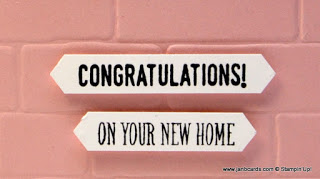 When I’d finished the flowers, I painted the house using Sahara
Sand, and created a bit of shading by going over the same area a couple
of times.

Then I painted the bird using Crumb Cake, and I did some
shading, but unfortunately I went over the edge of his tail – not much
but I wasn’t happy! 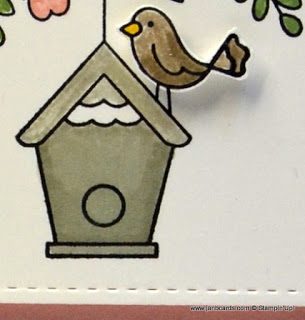 I took a scrap of Whisper White CS, stamped another
image of the bird, repainted it, and fussy cut it so I could adhere it onto the bird I wasn’t happy with a Dimensional.

This gave me the idea of stamping one of the
butterflies, and the flying bird, painting and fussy cutting them as
well, so they could be adered onto the main image with Dimensionals!

Next
I had to find the sentiment, so I sat down and went through my stamp
reference file and found ON YOUR NEW HOME in the At Home With You Stamp
Set.

All I needed then was CONGRATULATIONS in a size that complimented
it! 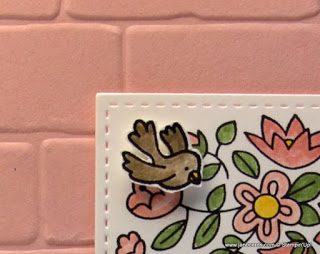 Although there were several options I liked – I totally dimissed CONGRATS – the sentiment I liked best was in the Lift Me Up Stamp Set.

It was attached to YOU SOAR
ABOVE THE REST stamp, but this didn’t matter as I was punching both parts of
the sentiment using the Classic Label Punch.

The size of the punch was
spot on for this sentiment but too long for the second part i.e. ON YOUR NEW HOME. 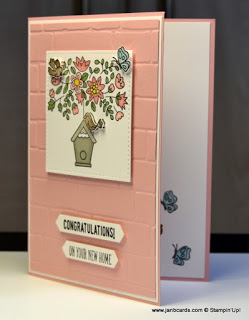 As I
didn’t want a long piece of plain cardstock either end of this sentiment, I lined the
first punch up with the sentiment starting where I wanted it to be.

Once I’d punched it out, I fed the end on the right-hand side back into the punch from underneath, which allowed me to punch the excess off!

I dry-embossed the top layer
using the Brick Wall Embossing Folder, and then adhered the three pieces
together using Tombow. I adhered all the images to the top layer with Dimensionals, and
then adhered a layer of Whisper White CS inside the card. 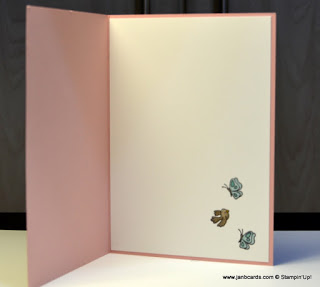 Using Basic
Black Archival ink, I stamped two butterflies and one bird in the bottom
right hand corner of this layer, and coloured hem in the same way as on the front.

I
forgot to mention that I used Soft Sky and Pool Party Marker Pens for
the butterfly on the front of the card, and followed this through inside the
card.

There is a third image in the stamp set Flying Home, but I don’t have any ideas springing to mind what to do with it! 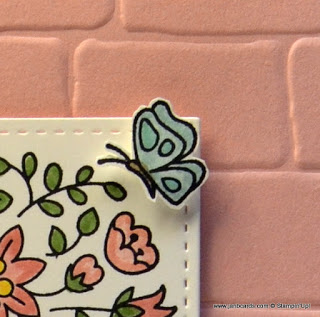 I hope you’ve enjoyed this project. That’s about it from me today, so until tomorrow, happy crafting.