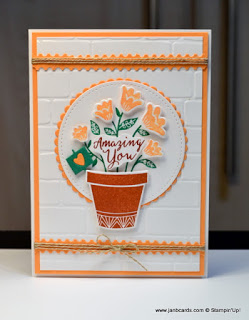 Yesterday I finally managed to get my Die Storage Folder back up to date again since I bought several of the new dies sets available in the new Spring/Summer catalogue!

One
of the big advantages of my filing system is that because I clean any
glue residue off the backs of the dies, and then make a die cut with
each die, I get a really good look at them rather than just a cursory
glimpse of them.

I have already used this stamp set before, but not the
co-ordinating dies, so I decided I would change that with the card I
made for today. 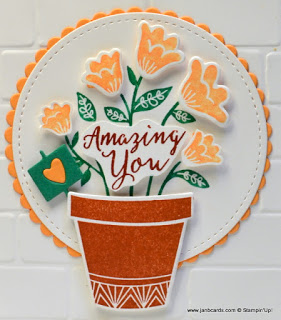 At
this time of year, I’m well aware that one set of InColours will be
retiring when the the current annual catalogue retires on 31st May 2018.

In order that I don’t finish up with too much InColour cardstock, I try to make sure I don’t overlook these colours when choosing which colour I’m going for each day.

Apart
from the dies and the colours, I didn’t have any idea what I was going
to do for today’s card.

I chose the tulip-like flowers because I
preferred the sentiment AMAZING YOU. 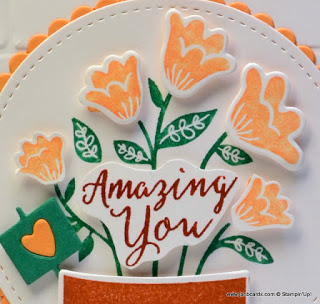 However, once I’d finished my card, I did
think I could have used the other bunch of flowers, but used my
preferred sentiment as I fussy cut it and popped it up on Dimensionals –
I could have covered the other sentiment with my fussy-cut!

I
painted the flower stamp using my Marker Pens – Peekaboo Peach, Emerald
Envy and Cajun Craze – and stamped it on a spare piece of Whisper White
CS.

Then I repainted the flowers in Peekaboo Peach, and stamped them on a
scrap of Whisper White CS.

There are dies for the three flowers in the
middle, and I  hand cut the two outside flowers.

Next I repainted the
sentiment and stamped it onto another scrap of Whisper White CS, and cut
around it making sure I avoided the stems and the leaves.

Using
Cajun Craze, I stamped another flower pot and die cut it. 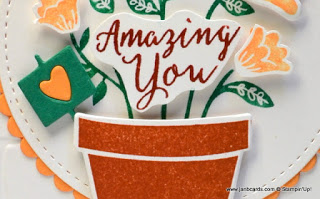 At this stage I had no idea what I was going to
do with them…..I just like them!

I used the largest Stitched Shape
Circle die to cut the image out, but it meant cutting off a large
portion of the flower pot, but I was OK with that. 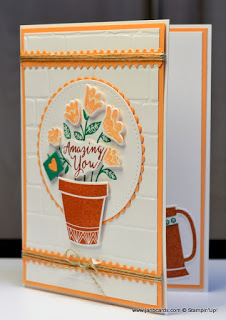 I think on the
finished card, it looks like the pot of flowers is in front of a round
window, or that the circle is the sun behind the flower.

You may
be seeing something different, but either of my possible explanations,
one thing’s for sure, it doesn’t look odd!

I
dry-embossed the Whisper White CS background using the Brick Wall
Embossing folder, and adhered it to a layer of Peekaboo Peach CS.

The
image on it’s own wasn’t enough, but I didn’t have any suitable rinbbon to
wrap around the layers, so I deciided to use my Ticket Tear Border Punch. 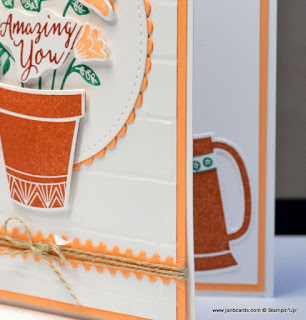 I don’t
believe I’ve see this punch used on any cards I’ve seen since this punch
first became available on 1st June 2017!

Have you used it or seen any
cards that have used it?

I have to admit, I’m not that keen on the
punch, although I do like the look of it with the Linen Thread wrapped around.

To
decorate the inside of my card, I added a layer of Whisper White CS on
top of a piece of Peekaboo Peach CS. 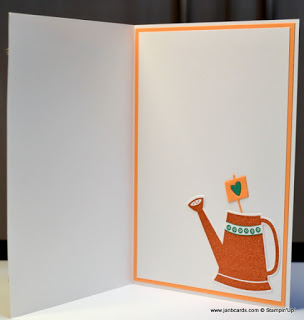 Using Cajun Craze Ink, I stamped the
watering can on a scrap of Whisper White CS, cleaned the stamp, and
stamped the top part only, using Emerald Envy.

I die cut the main
watering can, and then cut out the green patterned band by hand, and adhered
it onto the main can.

I inserted one of the flags in the top with the
opposite coloured heart, and then went back to the front of the card and
added the flag in the top of the flower pot!

That’s my card for today and I hope you’ve enjoyed this project. 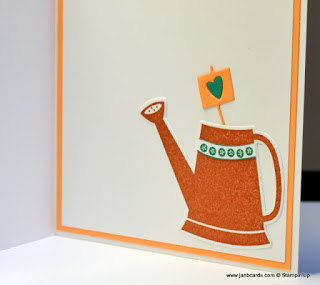 Whatever you have planned for the weekend, I hope you’re able to relax and enjoy it!