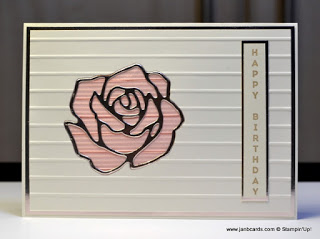 When
I first started doing this technique about seven years ago, I described
it as a variation of iris folding i.e. using ribbon in straight lines
instead of folded strips of paper working in a circular direction.

Back
then, I used to punch a shape – normally a flower – and then adhere the
ribbon in strips to “fill” the hole. 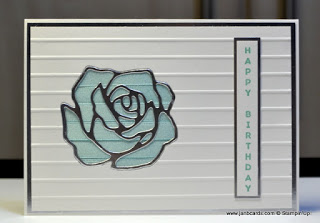 For today’s video, I’ve revamped
the idea by using a die cut of the (smaller) Rose Wonder Thinlit Die,
and replacing the die cut back in the hole once it has been “filled”
with ribbon.

When
I first decided to make today’s video, I had so many ideas running
through my head, I really didn’t know where to start. 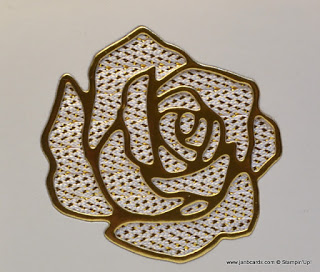 I stopped thinking
and went back to the beginning, so I could concentrate on the technique
only, and I’ve finished with a very striking, clean and simple card which is oh so easy!

It
took me three roses before I was happy with the result!

I like the rose
with the Very Vanilla and Gold ribbon which was was one of last year’s
Sale-a-bration gifts, but I’m not happy with the plain Very Vanilla top layer.

I’m working on a solution, because I don’t want to just discard it! 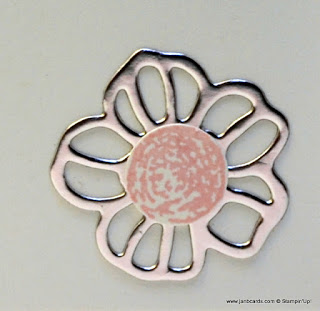 I have a couple of ideas but I don’t know if either of them will work!

If I have success in rescuing it, I’ll share it with you on here!

During the video, I said I was thinking of adding some Pool Party to the centre of the flower inside the card, and I said if I did I’d post a photograph on here!

This is the pink one, which is the same as the blue – the stamp is from the Daisy Delight Stamp set.

In the meantme, that’s it from me today.

I hope you have a lovely Sunday, and until tomorrow, happy crafting.