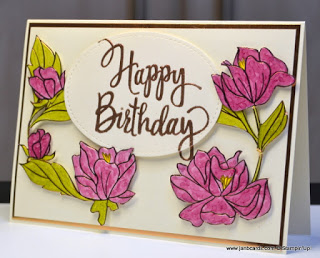 It’s similar in style to the Year of Cheer
Specialty DSP that was available in the Christmas Catalogue. 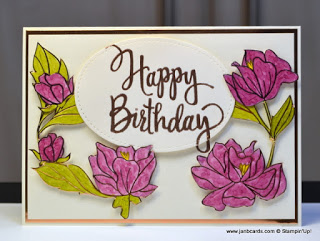 The
sheet I’ve used is all flowers and leaves which have been embossed with
Copper Foil.

The surface of the DSP is very smooth, and has a shiny
finish to it, which gives a great effect when coloured with our Stampin’
Blends! 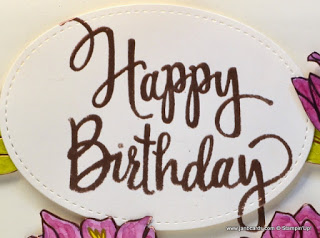 I found if I painted in faint straight lines quickly,
the ink dried like that but when I went over the same places two or
three times, I finished with a brilliant “water splattered” look.

The
more I went over it, the more intense the splatters became – have a close look at the induvidual flowers!

I spent
quite some time choosing which flowers to paint, some with leaves, some
without, some buds and some fully opened flowers. 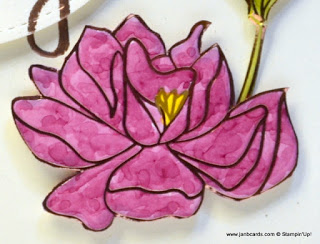 After I’d coloured
them, I fussy cut them, which gave me plenty of time to think how I was
going to use them as part of a design.

My first idea was to use the HAPPY
BIRTHDAY Framelit in the centre of the card and then arrange the flowers around.

When I took the die out I decided it was too big, so I decided to try the Stylised Birthday Stamp.

I wiped a layer of Very Vanilla Cardstock (CS)
using my Embossing Buddy, and stamped it in Versamark in the centre, at the top of
my layer.

I heat embossed it using Copper Embossing Powder, and played
with arranging the flowers and leaves around. 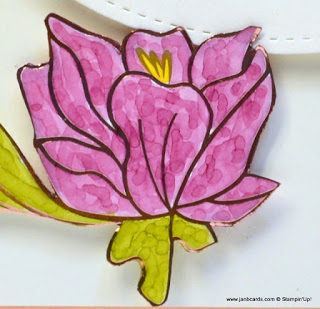 Once I was happy, I
started adhering the flowers and leaves in position with Dimensionals.

The arrangement of the flowers was lovely, but the sentiment was totally
lost; it looked as if I was trying to bury it! 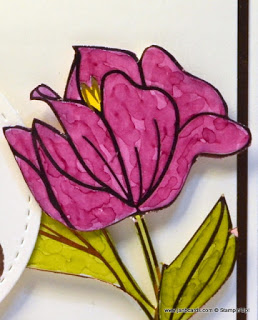 I took another piece of Very Vanilla CS, and heat embossed the
sentiment with Copper Embossing Powder again, then I die cut it using the
largest oval Stitched Shapes Framelits Die. 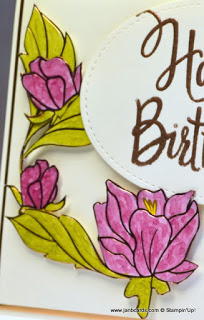 Unfortunately, this cut off the
lowest part of the letter “y”, which was visible when I positioned the
die cut where I wanted it to go, and I was delighted to see it matched the y on the Very Vanila layer! I couldn’t
have planned it better!

I
found it was easier to put the Dimensionals straight onto the layer,
rather than trying to work out where they needed to go on the die cut –
it worked brilliantly! 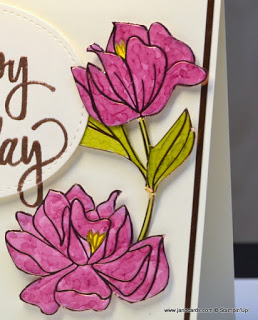 I
was able to get a couple of the flowers to lay on top of the die cut
which helped to blend all the pieces together beautifully.

I added my
layer to a piece of Copper Foil, and then onto a Very Vanilla card base.

Unfortunately, I ran out of time and wasn’t able to decorate inside the
card.

Sometime over the weekend, I’ll finish it off by adding a layer of
Copper Foil, and a top layer of Very Vanilla CS.

I’ll decorate the
bottom right-hand corner with another flower that I’ll paint and fussy
cut.

I
hope you have a great weekend. I’ll pop in briefly tomorrow morning to
share my video with you, and in the meantime, happy crafting.