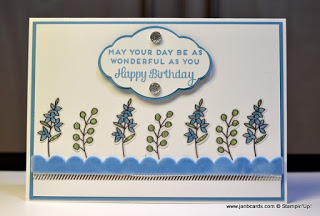 Today
I’m sharing the second card I made using the Sweet Soiree Embellishment
Kit, but this time I’m featuring the gorgeous soft Marina Mist vevet
ribbon that comes in  the kit! 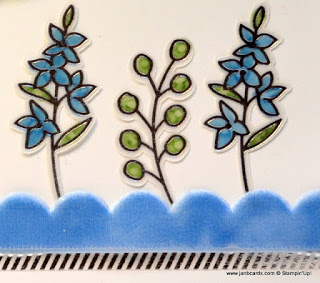 Fortunately, I chose to use some
of the individual flower stems which meant I couldn’t use the Basket
Weave Embossing Folder, which I am seriously in love with!

I
started my card the same way as yesterday, which is a Whisper White
Cardstock (CS) card base, with a Marina Mist CS layer, and a top layer
of Whisper White CS.

To colour the back of the vellum flowers, I used
Marina Mist and Wild Wasabi Marker Pens.

I painted four of the individual flower stems
for the front of the card, and also four of the green bobble flowers/leaves(?). 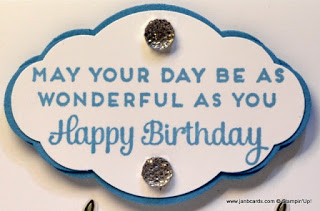 I
adhered the flowers in place on the front of the card, starting with a
blue flower at either end, and then one green bobbly stem in the centre.

This made it so easy for me to place the other four, with two on each side so the
spacing was pretty even! 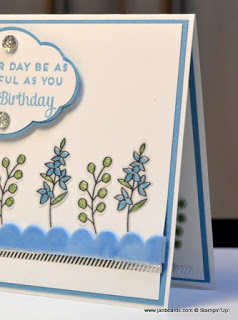 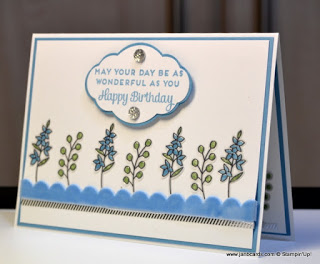 I
adhered the velvet ribbon around the Whisper White CS layer, and
secured the ends at the back.

I then added a line of the Washi Tape
which also came as part of the kit, in a straight  line under the ribbon.

I
stamped the sentiment, which is from the Cake Soiree Stamp Set, using
Marina Mist Ink on Whisper White CS.

I punched it out using the Pretty
Label Punch, and I also punched out one shape in Marina Mist CS, plus two of
the end pieces as far as the end of the second curved pieces.

I trimmed
these two end pieces so they had a pointed base, to make sure there weren’t any unwanted pieces sticking out where I didn’t want them!

Using Tombow, I adhered them to the sentiment leaving about 1/8″ gap.

Next I cut the complete shape in half
horizontally, and adhered one top and one bottom, again leaving about 1/8″ gap all round.

From a distance, it looks like one complete layer in
Marina Mist! 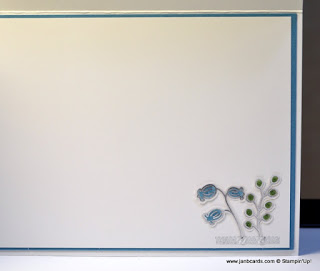 Then I adhered  the  two
remaining vellum flowers and added a small strip of the Washi Tape
across the bottom of the stems.

Before I go, I’d like to show you a couple of photographs I took when we went in London last Saturday.

There’s
a lot of redevelopement going on in the area, and we spotted this very
old facade of a building that has been shored up to preserve it.

I just cannot imagine what a new building will look like with this incorporated into it!

We’ll have to go back into that part of London in a year’s time to see how it’s been developed!