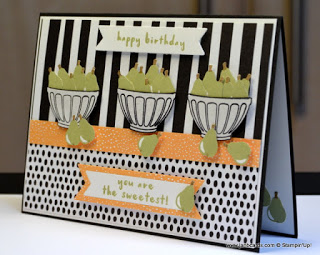 Last
Thursday, I shared a card that featured three bowls of strawberries
that I’d made using the Fruit Basket Stamp Set.

I was asked if I’d make a
video showing how I made the card, which I was happy to do.

As usual,
before I started prepping for the video, I made another card which was
more or less the same, but I used the pears.

My plan was to use the
pineapples for the video and I started preparing two bowls full of
them as it would take too much time making three complete bowls in
the video.

However,
I was disappointed with the pineapples because they were so small,
especially in comparison to the size of the strawberries and pears. 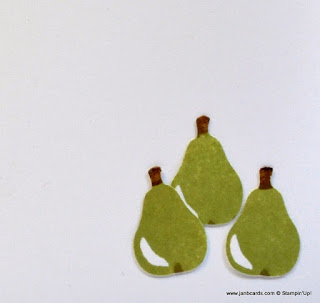 I
think a better idea for a bowl of pineapples would be to fussy cut the
pineapples that feature on one of the sheets of Tutti-fruitti Designer
Series Paper (DSP).

Not suitable for anybody who doesn’t like
“fussy-cutting”, but even if it’s just for one bowl – not three as
featured in my card today! – I don’t think it would take too much!

The
fourth fruit in the stamp set is a slice of fresh fruit, but I don’t
think that would look quite right in a bg bowl like the one in the
video.

This meant I had to repeat the strawberries or the pears, and the
pears won because I thought the first pear stamp looked rather dreary! 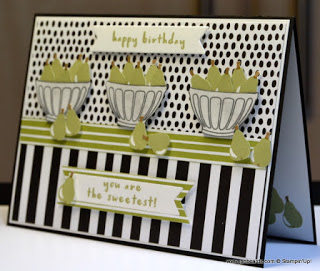 I
kept the card on the video more or less the same, but I changed the
“table” strip of DSP to a Peekaboo Peach design from the Tutti-fruitti
DSP, and also used it to frame the second sentiment.

Although the
Peekaboo Peach is a very subtle orange, it has made a very big
difference!

Now I’m wondering if I can replace those two parts on the
drreary card – the green stripe DSP is from the Coffee Break DSP – or
should I leave well alone.

I know the latter is more sensible, but I
know me, and might just take the plunge and have a go! LOL!

If you have your eyes on any of the free gifts
available as part of SAB, don’t leave it too long before you place your
order! 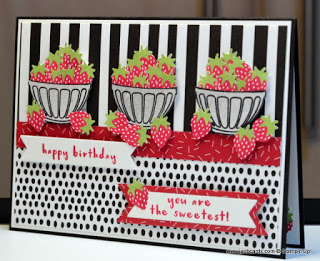 You really don’t want to miss the boat!

With the exception of the
Basket Weave Dynamic Embossing Folder and the Celebrate You Thinlits,
which will be in the 2018 – 2019 catalogue, all the other gifts in the
first two brochures will nt be seen again!