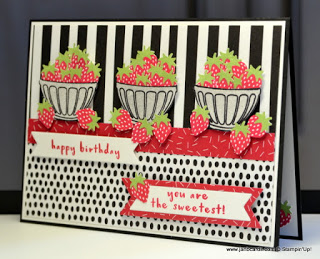 Yesterday I had my
first play with the Fruit Basket Stamp Set, and thoroughly enjoyed
making today’s card.

This did rather surprise me as I really wasn’t
looking forward to using this set; in fact, I don’t know why I bought
it in the first place! 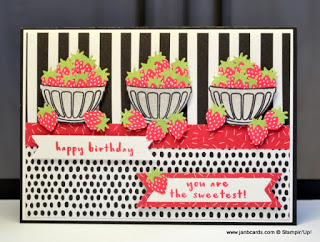 But now that I’ve used it, I’m really pleased I did buy it, even after
making  thirty-three strawberries!

When I first started, I had forgotten
that the punches which co-ordinate with this stamp set, punch the image
a fair bit smaller than the actual stamped image. 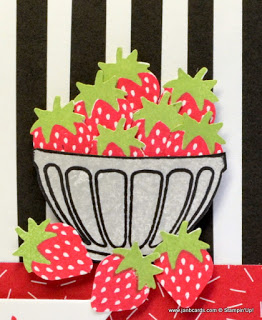 The stamp set and
the set of punches are offered as a bundle in the catalogue which saves
10% on the individual prices.

There
are outline stamps for each of the four pieces of fruit, so I imagine they come
into their own when stamping directly onto a cardstock layer, as opposed to being punched out.

I need to
test my theory next time I use this set, because if the fruit don’t
need the outline stamp when they’re being punched, why do they need it when
they’re not being punched.

The logic of this escapes me at the moment
but I’m sure it will all become clear all in good time!

It
didn’t take any time at all to work out how to do the two-step stamping
to get excellent results every time, it was so easy! 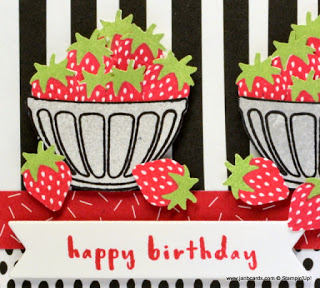 Obviously it’s a big help that the
stamped image is bigger than the punched image, as it increases the
margin for error!

The colours I used are Real Red and Wild Wasabi for the strawberries,  Tuxedo Black Memento Ink for the bowl outline, and the block of colour
for the bowl is Smokey Slate; then I  fussy cut the three bowls.

The
Designer Series Paper (DSP) I used is  the Tutti-frutti 6″ x 6″ DSP Stack. 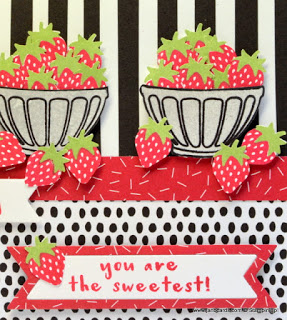 I
chose two black and white designs, as well as a fairly plain Real Red
design, which I cut in a half inch strip to go across the centre of the
card to represent a table for the bowls to sit on.

The
two sentiments are both from the stamp set, and have been die cut using
one of the dies from the Bunch of Banners Framelits dies.

Although I
haven’t used this die before, I love the design of it, because it die cuts the sentiment, and at the same time an outline around the sentiment which allows  the sentiment to sit inside! 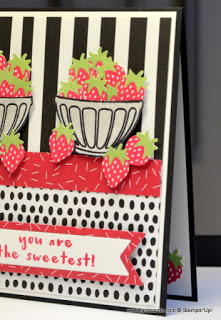 I took some
more of the red design DSP I’d used for the “table”, and used the same
die to  cut out the two parts of this die so I could use the red outline shape for the sentiment to sit inside; the idea
is to make the sentiment to look layered but, in fact, sits inside the
frame.

To
finish the card, I adhered a layer of Whisper White CS inside the card,
and adhered three strawberries in the bottom right hand corner.

This was
a fun card to make, despite getting a bit carried away with making
strawberries, and I have to confess, I didn’t think I would be writing
about this stamp set in such glowing terms!

I’m so pleased I bought it! 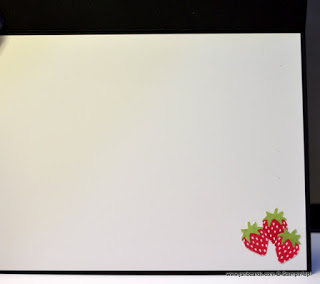