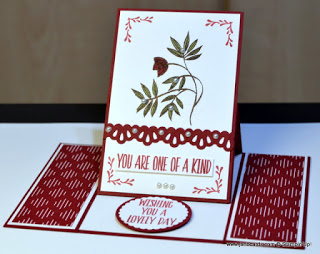 Today’s video shows
how to make a Centre Easel Card – this is my fourth out of five fancy
fold cards I promised.

You’ll recognise the image and design on the easel
card as I based it on the card I shared here on Monday. 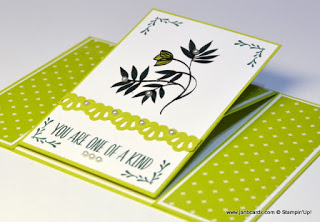 and sentiment, but that’s where
the similarities end.

I’ve been very aware that recently I’ve been using pink and
blue for a lot of my cards, so I’ve tried to use other colours! 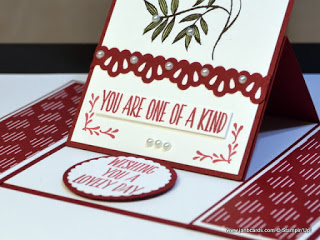 Yesterday’s card was black and yellow, and
these two easel cards are in Cherry Cobbler and Lemon Lime Twist.

Let’s
see how long I can keep up ringing the changes. 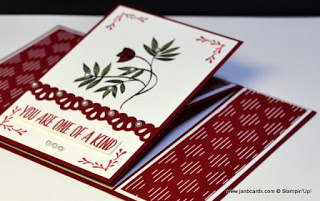 The
size of the easel card is the same size as a normal card, and fits into
a regular envelope.

The Designer Series Paper (DSP) I used for the
Cherry Cobbler card is from one of our Christmas 2017 sets, but fits in
nicely with non-Christmas cards.

This is another excellent example of
the brilliant versatility of Stampin’ Up! products. 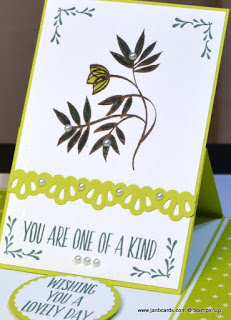 With the easel card, there’s
room on the Whisper White layer, under the easel, where a
greeting can be written, or it could be written on the
back of the card.

On
the Cherry Cobbler card, when I first stamped the You Are One Of A Kind
sentiment, I smudged the ink.

I didn’t want to adhere the new sentiment
straight onto the smudged one because it makes it obvious that I’d made a
mistake!

Equally I didn’t want to put it on Dimensionals, because the
error would be easily seen if someone looked under the new sentiment! 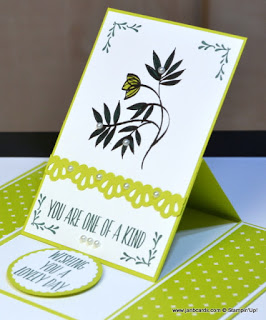 Instead, I adhered five layers of cardstock together, then put the
sentiment on top and adhered it over the mistake.

Like this nobody would
know there’s a mistake underneath it.

I hope you enjoy today’s project. That’s about it from me today, so until tomorrow, happy crafting.