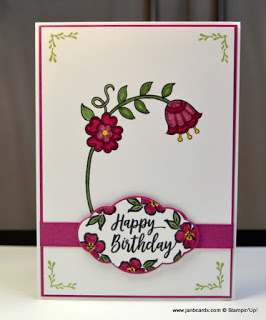 I
bought the Hostess Feathery Friends Stamp Set as I thought it would be
great fun colouring the stamped images, but I didn’t get as far as
thinking what I’d do with the images once they were coloured!

So I
decided to have a look at Pinterest for some inspiration, and my
goodness, I found a lovely selection of ideas on there.

When I closed
Pinterest, I wanted to use the birds and the flowers but not at the same
time! 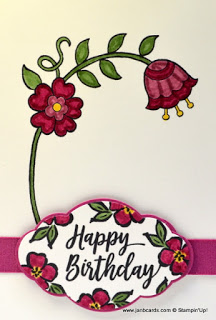 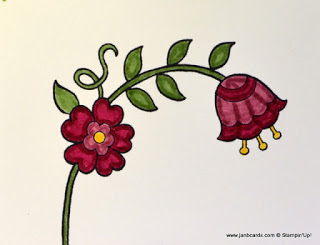 I settled for the stem with two individual flower heads, and I
stayed with my normal two or three colours, although I did see lots of
ideas on Pinterest that were mult-coloured!

My first thought was Berry
Burst and Powder Pink, but then I changed my mind to Berry Burst and Sweet
Sugarplum.

Although I like the result, I’m not sure if my first idea
would have looked better – that’s now on my list of Give This A Try! 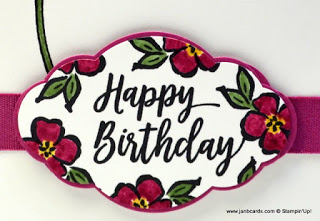 Using Basic
Black Archival Ink, I stamped my chosen image in the centre of the page,
and I also stamped the curvy stem of leaves on a Whisper White CS layer
for the inside of the card.

As I wanted a flower head inside the card, I
decided to stamp one on a scrap of Whisper White CS, rather than stamping the flower head first, making a mask for it, and to then stamp the stem over it!

As well as the two
Berry Burst and Powder Pink Marker Pens I’d already chosen, I also chose to use the Daffodil
Delight Marker Pen to paint the inside of the flowers to represent the stamens, as well as the Wild Wasabi Marker Pen
for the leaves and the stems.

I don’t normally like a plain background
and was looking through my Stamp Set Reference Folder to find somehing I
could use to remedy this.

Then I remembered that last week I’d used
a corner stamp but couldn’t remember which card I’d used it on, nor which
stamp set I’d found it in, so I went back to the beginning of my book!

It didn’t take long to find what I was looking for in the Hold on to
Hope Stamp Set, so I used Wild Wasabi Ink to stamp it in each of four
corners. 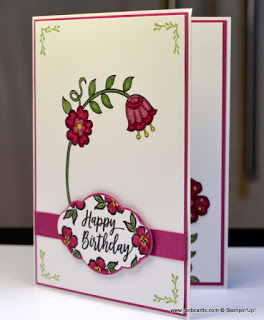 To help give my card some balance I needed a fair-sized
sentiment, so I chose Happy Birthday from the Southern Serenade Stamp
Set.

Using Basic Black Archival Ink, I stamped the image onto a scrap of
Whisper White CS.

I wanted to decorate around the sentiment and chose to use the the single flower with two leaves stamp that’s in the Southern Serenade Stamp Set.

I
stamped a circle of six flowers around the sentiment. 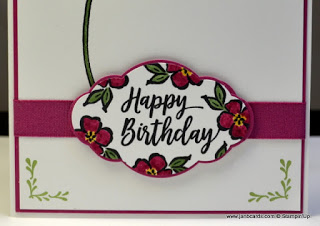 Staying with the
same colours, I coloured the flowers and leaves, and then punched the image out
using the Pretty Label Punch.

I also punched two shapes in Berry Burst
CS, cut one in half horizontally and one in half vertically.

I used
all four pieces to add a layer behind the sentiment, and used Tombow to adhere them into place! 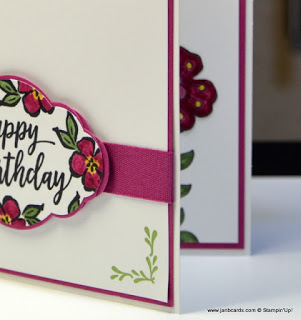 Next I adhered the top two layers together, and then adhered a piece
of Berry Burst 0.5″ Finely Woven Ribbon around the lower part of the
card of.

After adhering Dimensionals to the back of the sentiment, I adhered it over the ribbon.

Finally I added this to the card base, and started working on
the inside of the card.

I
fussy cut the flower I’d coloured earlier, and adhered it to the stem.

Next I adhered the two layers onto the card base.

I did toy with the
idea of adding some Berry Burst Self-Adhesive Sequins to finish off the
front of the card but decided better of it. 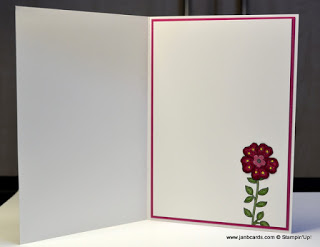 I was happy with my card and
decided to leave well alone!

It feels like the weekend because hubby was working from home yesterday and it’s going to be the same again today. 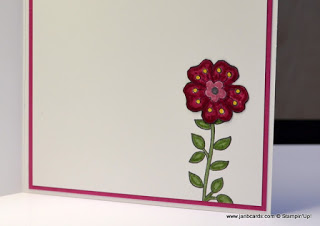