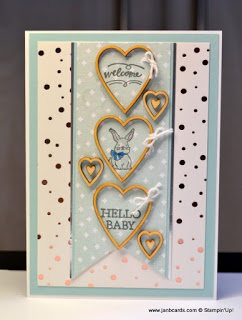 This is another unusually busy card for me, but I think I quite like it! LOL!

My
first idea was to heat emboss the three images that are inside the
three large hearts, but for some reason two of the three Versamark
stamped images just would not pick up the Copper Embossing Powder!

I
gave up after three attempts, and settled for Basic Grey Archival Ink,
but I would still like to know why two of the images refused to pick up
the embossing powder! 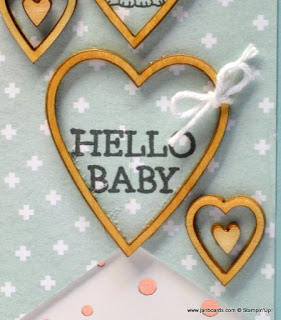 This
card is another example of how easy it is to mix and match Stampin’ Up!
stamp sets.

I chose the Welcome stamp from the Wood Words Stamp Set,
the rabbit from A Good Day Stamp Set, and the Hello Baby stamp is
from the Moon Baby Stamp Set.

Wooden elements have never appealed to me,
but I have played with the hearts before on a previous card, and they
are really beginning to grow on me! 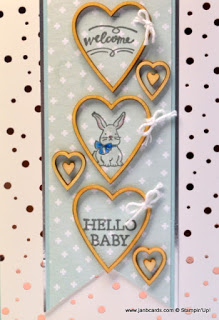 There’s another
set of wooden elements in the catalogue called Touches of Nature Elements, which I have
been playing with recently, too!

I
used my Watercolour Pencils as regular pencils, to colour the rabbit. The colours I
used are Basic Grey for his body and ears, with a soft touch of Melon Mambo
on the outer edges of his ears, and also for his nose; I used Pacific
Point for his bow.

The Whisper White Baker’s Twine bows were tied around the heart frame before they
were adhered to the card front, with Fine Tip Glue Pen.

It was an
effort to do this with the Glue Pen,  so when I was ready to adhere the medium heart
frames and the small solid hearts, I used Tombow which was so much
easier! 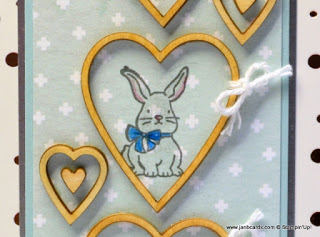 The
Designer Series Paper (DSP) that the hearts and images are adhered to
is the Naturally Eclectic DSP.

Then the DSP is on a layer of Pool Party
Cardstock (CS), and then a layer of Silver Foil.

The
card base is Whisper White CS, with a layer of Pool Party, and a top
layer of the Sale-a-bration (SAB) DSP which is called Springtime Foil. 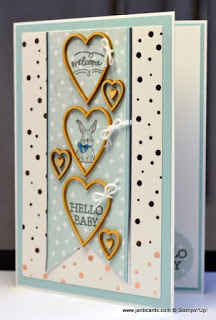 To
decorate the inside of the card I added a layer of Pool Party CS with a
layer of Whisper White CS on top.

When I created the first stamped images
on the DSP it didn’t work out because I’d cut it too short to fit the three
large hearts on.

Rather than waste it, I punched out the three images using my
1 3/8″ Scalloped Circle Punch, and adhered them along the bottom of the
CS inside the card! 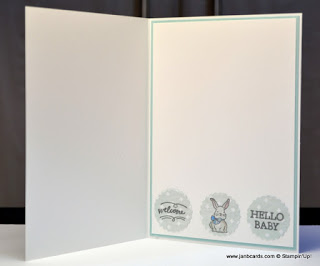