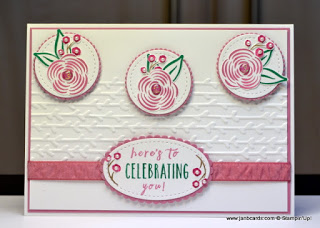 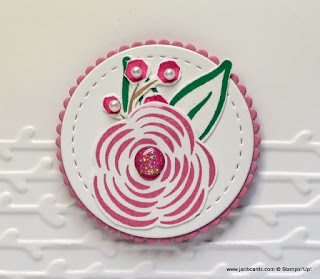 I
was overwhelmed by the amazing response I received for my new Facebook
group yesterday.

It was finally up and running by about 5.30 pm and
within the first five hours there were thirty-eight members, and
crafters had already started sharing their projects, and chatting.

And to think I’d been
worrying about whether it was a good idea to set up a group or not ! I’m well aware that there are already a great many crafting groups  available on
Facebook, and I wasn’t sure if there was room for another one!

If you would like to join the group as well, this is the link: Happy Crafting

It’s
not a very imaginative name, but it’s my sign off from my blog, my
videos, my emails and just about everything else, and I thought it’d be
easy to remember Happy Crafting! 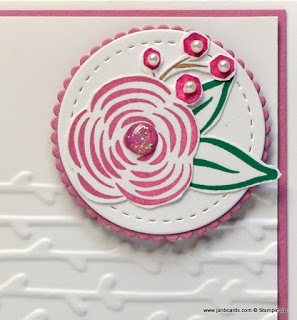 Yesterday
was my first play with the Perennial Birthday Stamp Set, and it was the
whirly-type flowers that had first caught my eye!

The problem with the main
flower image is that it has some solid small flowers/berries included with the flower and leaves.

This means when the image is stamped in
black – so that the flower and leaves can be coloured – the small
flowers/berries would be solid black! 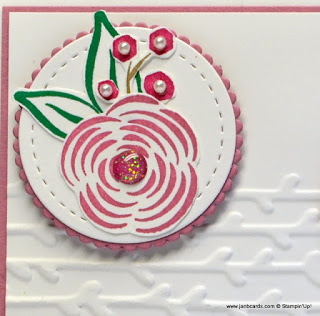 There are two ways I thought of to
get round this. I could paint the image on the rubber stamp using three four different
Marker Pens, huffing on it and them stamping!

I rejected this idea because I thought it’d be too time
consuming.

I moved onto plan B, which was to use tape to cover everything except the
flower, and stamp the flower three times using Sweet Sugarplum
Ink.

Then I cleaned my stamp and inked up the leaves and a bit of the
surrounding stamps in Emerald Envy Ink.

Finally I coloured the stem with
my Soft Suede Marker Pen, and the flowers with the Berry Burst Marker
Pad.

Then I fussy cut all the flowers and leaves – which was quite easy
–  and then the stem with small flowers/berries, definitely not so easy!

I
used one of the Petal Pair Embossing Folders, and dry-embossed the
centre of the top layer, which was Whisper White Cardstock (CS). 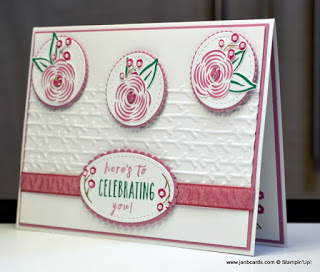 My original plan
was to make the card vertical, but when I decided to make three circles
with the images, I realised I wouldn’t have room for the sentiment.

Before
I adhered the fussy cut elements to the Stitched Shape Whisper White CS
circles, I adhered the flowers, leaves and berries together – making
sure the position with all three  of them were at very different
angles.

I wrapped some retired Sweet Superplum Ruffled Ribbon around the
top two layers of the card, and adhered the sentiment over it so the
Dimensionals sat either side of the ribbon. 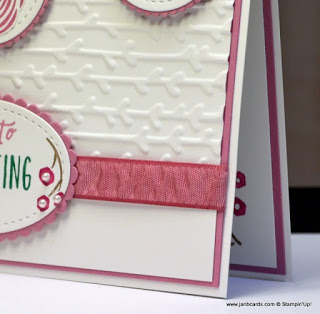 I forgot to say that I’d
painted the sentment using Marker Pens, and decorated either end with
the stem and small flowers/berries, painted the same way as earlier.

I
also repeated this twice more to stamp inside the card. 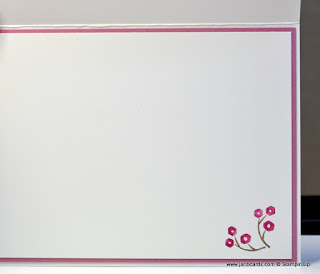 This is a very clean looking card and I enjoyed making it, but it’s not for someone whose in a hurry, or someone who doesn’t like fussy cutting! LOL!

That’s it from me today. Untiltomorrow, happy crafting.