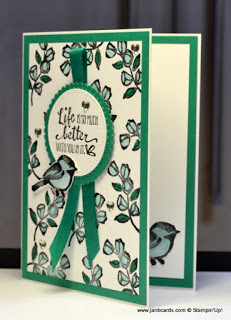 This week I have been
working on projects for the class I have in Peacehaven on Saturday.

I have one card, and the 3D project ready and fully prepped.

Yesterday I
was working on the second card, and made the prototype, but it wasn’t
quite right.

I started the second attempt, but I reached a point where I
lost concentration, because I was enjoying what I was doing – concentration and enjoyment don’t always go hand-in-hand! 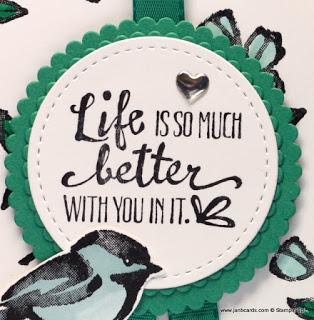 However, I liked what I was doing,
and decided to make it today’s card!

As I’ve said previously, I’m
concentrating on using as much of my 2016 – 2018 InColour Cardstock (CS)
as possible before it retires.

For my Peacehaven projects the only restriction I have is that I
must have ribbon that co-ordinates with the cardstock – I shall be
teaching a technique which uses ribbon!

I’ll share the class projects
with you after Saturday. 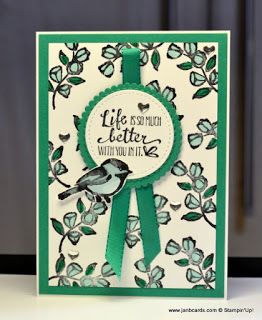 For
today’s card I cut the top Whisper White layer a quarter of an inch
narrower and shorter than I normally do.

This created my own Designer Series Paper
(DSP), and then I coloured the flowers using my Pool Party Marker Pen, and the
leaves with my Emerald Envy Marker Pen. 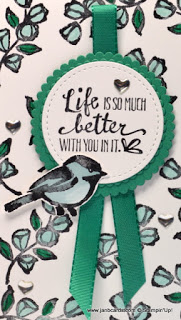 While
I was colouring I was thinking about ways I could decorate the front of
my card, and decided I’d use one of the sentiments as the main focal
point.

I stamped the image using Jet Black Stazon Ink, onto a
piece of Whisper White CS, which I then die cut using a Stitched Shape Circle
Framelit Die.

Next I wanted a layer for the sentiment in Emerald Envy
CS, so I used a scalloped circle from the Layering Circles Framelits
Dies.

I wasn’t sure that was the size I wanted to use, so I die cut
a larger scalloped circle using the next size Layering Circle Framelit
Die. 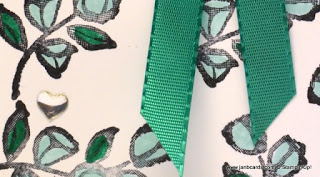 In the end I decided to use both sizes, and adhered all three circles
together!

Then I wanted to attach some ribbon at the back of the sentiment.

I
took a length of retired Emerald Envy Ribbon, folded it in half, and put
a Glue Dot between both sides of ribbon near the fold, to hold it together. 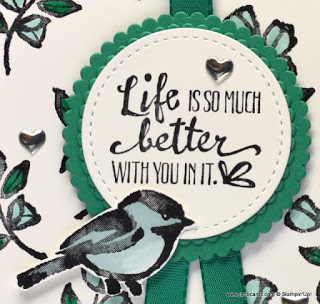 Then I used
another Glue Dot to adhere the top part of the ribbon behind the back of the
sentiment, and one more on each side lower down to keep the two tails
in position.

Then I was able to adhere Dimensionals on the back of the
image, and adhere it in place on the card front.

Next
I stamped two birds, and painted them using my Soft Sky Marker Pen. 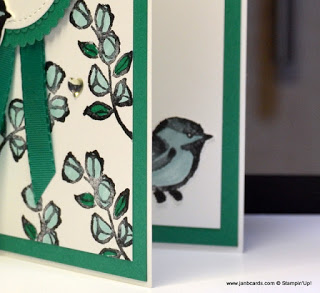 I adhered one to the front of the card by putting Dimensionals on the lower half of his body, so his head would rest on the sentiment.

To finish the front of
my card I added some silver foil hearts from the Metallic Enamel
Shapes.

The final touch to finish my card was to add a layer each of Whisper White and
Emerald Envy CS inside the card, and then I adhered the second bird in the bottom right-hand corner, using
Tombow. 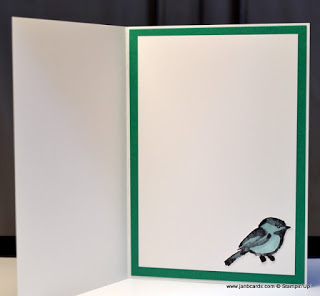 Today, I’ll get back to creating the second card for my Peacehaven class tomorrow – no time to waste now!

That’s about it from me today. I hope you have a lovely day, and until tomorrow, happy crafting,