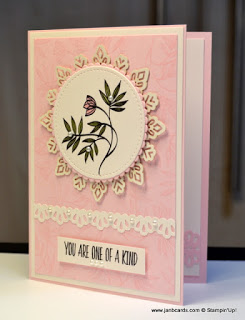 I hope you’ve enjoyed
your weekend.

We didn’t do anything special, just a quiet weekend for
the two of us, although hubby was on call again.

Like last weekend he
was working from home, and I spent most of my time crafting! No
complaints from me! ☺ 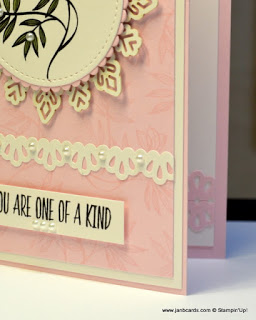 Yesterday
evening I used some retired Stampin’ Up! letter dies to add Vicki and
Leigh’s name to two of the cards I featured in yesterday’s video.

Obviously the masculine one for Leigh, and the Pool Party Springtime
Foils for Vicki.

I adhered the letters on the front slim panel; Leigh’s
name is very prominent as it’s Crumb Cake on Tranquil Tide, but Vicki’s is a little bit lost as hers is Pool Party, but it still
looks good.

For
today’s card I really wanted a doily behind the flower image, but I
won’t have any until my delivery arrives sometime this week! 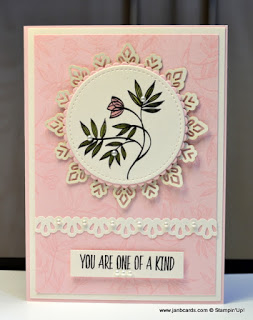 I had a
choice between a retired white doily which is quite a bit bigger than
the current doilies, or one of the foil snowflakes that were in the
Christmas catalogue.

I went for the latter because it’s smaller,
although I suspect it’e even smaller than the current doilies too, but that’s
preferable to having one that’s too big!

The
image I used is from the Lovely Wishes Stamp Set, and I coloured it
using my Pear Pizzazz and Pink Pirouette Marker Pens.

I also used the
stamp set, tone on tone, on the Pink Pirouette Cardstock (CS) layer
behind the image.

The other CS I’ve used for this card is our Shimmery
White CS. 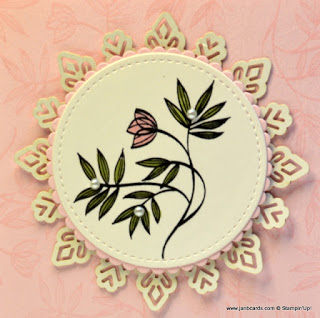 I adhered the Foil Snowflake to the top layer by applying some Tombow to
the back of it, and then added the flower image with Dimensionals.

I
punched the decorative strip using the Decorative Ribbon Border Punch,
and adhered between the flower image and the sentiment.

The sentiment is
also from the Lovely Wishes Stamp Set, which I thought was quite
appropriate for next Sunday which is Mother’s Day here in the UK.

I
think I allowed myself to get a little bit carried away with myself
when it came to adding some Basic Pearls! 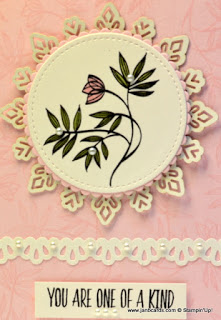 First of all I added one to
every hole in the gaps between each “segment” of the fancy punched strip; next I
added three in a row under ONE to emphasise the word, and then I added
three to the leaves to simulate berries!

I
added a layer of Shimmery White CS inside the card, and to decorate it I
punched two strips of Pink Pirouette CS with the same punch I used for the strip on the fron of the

I adhered one on top of the other, by putting the two
scalloped sides just touching each other.

I was really pleased with the look
but it needed something to finishe it off. 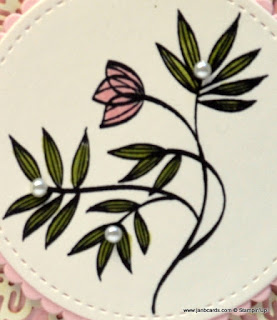 I never decorate the inside of my cards with
Rhinestines or Basic Pearls, instead I decided to use the small round
Clear Epoxy Shapes.

They are a size that I really can’t imagine will cause any damage to the
inside of the card, even if it’s send by post.

I’m really pleased how this card turned out, and it could just as easilly be used for a birthday card with a change of sentiment!

I hope you enjoyed visiting my blog today. That’s about it from me for now.

So until tomorrow, happy crafting.